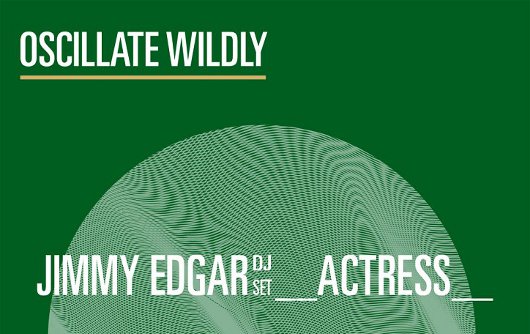 Taking place at London’s CAMP on Friday 30 September, the night will be the latest in Oscillate Wildly’s exceptionally programmed line-ups, and follows their recent monster of a party with George FitzGerald, Objekt and Arkist.

Headlining will be !K7 artist Jimmy Edgar, who will be performing a 90-minute DJ set on the night, fresh from appearances at Boiler Room and Berghain. Equally exciting will be the set from the one and only Actress, who impressed Juno Plus with his recent Field Day appearance. It’s fair to say the man is quite an enigma, so whether he will be playing a live show or simply delivering one of his eclectic DJ sets will probably be down to the direction of the wind on the night.

Further action will be provided by Rinse FM and Doldrums man Braiden, whose 808 heavy remix of Jacques Greene’s “Holdin On” is one of this year’s heaviest house jams, and fellow Rinse colleagues Ill Blu, who will be bringing their Hyperdub and Numbers endorsed brand of UK funky to the already huge line-up.

Supporting the headline acts will be LDN DC’s DRX, and Juno Plus editor Aaron Coultate, who will be freed from the shackles of the Juno Plus offices for the evening.