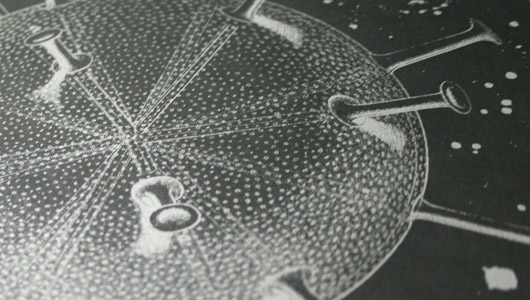 Whilst the rest of the internet was rushing over themselves to pass judgement on the Bon Iver-Jim Blake collaboration, we were too busy getting excited at the news that Tim Sweeney has finally got round to launching his Beats In Space label, with elusive Parisians Paradis taking the honours of first release.

The arrival of Cosmin TRG’s debut album was greeted with just as much fanfare at the Juno Plus office too. Spread across two slabs of white vinyl (yum) it’s a real statement of the Romanian’s swerve in sonic direction towards a techno sound indelibly stamped with his own unique palette. Thumbs up to 50 Weapons and Cosmin!

And look, that Edinburgh lot Firecracker emerged with another sumptuously designed 10″ which the top of this page is modelling with class. It sees Fudge Fingas drop two new cuts –  “What Works” and “Mass X” – across a tasty slice of wax that features the MF Vakula on B Side remix duties. Need we say more? Lagging just behind in the artwork stakes was the new EP from Lovebirds, which will hopefully bring wider attention to brilliantly deranged Honey badger, an animal whose thuggish disregard for nature’s food chain can only be applauded.

We mentioned the annual August slump last week and it’s still in effect now, though any week that features classy disco excursions from DFA, Editainment and Claremont 56 can hardly be classed as lacking! Fall On Your Sword made the translation from soundtrackers of films to soundtrackers of dancefloors with aplomb on their debut for DFA whilst Dave Woods went solo on a triple header for Editainment that demonstrated he doesn’t needs Larry Tiger to hold his hand in the studio. A new Holger Czukay 12″ for Claremont broke our superlative generator!

A thrilling triple header of tracks from Hieroglyphic Being, Specter and Aroy Dee meant that Sequencias not only made a superb debut entrance into the art of record labels, they also won first prize in a strangely dry week for techno releases.  More joy could be found in the endless bass continuum where Canadian wunderkind Jackie Greene also launched a new eponymous label with three shots of cheeky R&B vocal stealing club bumpers, whilst Instra:mental were the latest additions to the 3024 UK talent initiative along with Trevino. Those older dubstep heads out there will no doubt be more interested in Cyrus’ return to Deep Medi for a couple of typically stripped down steppahs!

On a digital tip, there was plenty to get excited about over at Juno Download. The Distal EP on Tectonic was one of the highlights: providing proof, as if any more was needed, that dubstep has become a truly global sound. Instead of lurching basslines, the US producer used glitchy, broken rhythms that weaved their way in and out of distorted happy-hardcore style beats. These unlikely elements provided the backing for the kind of mournful, eerie melodies that characterised Aphex Twin’s early ambient works. Figuring out where this release will lead dubstep is a great part of its charm. Some intriguing remixes of Creep surfaced too – compared to the more bassy releases on Young Turks, there was a definite housey strain woven into the remixes from Drop The Lime, Soul Clap, Super8 & Tab and, most excitingly, John Roberts.

Elsewhere, nu skool German revivalist Murphy Jax again proved more than adept at conjuring intoxicating blends of vintage Chicagoan jack and head-warping electronic disco with another EP for Clone’s Jack For Daze imprint, while Detroit legend Robert Hood continued to develop to his Floorplan alias and xxxy and Ike Release shared the spoils on Infrasonics. The excellent West Norwood Cassette Library Get Lifted EP made the transition from 10″ to the world of WAV – a cheeky mid-nineties vibe is undeniably present, but somehow WNCL fuses Strictly Rhythm-style funk with a rolling break, hip-hop stabs and positively modern acid squelches.

The big CD of the week was undoubtedly Marcel Fengler’s Berghain 05 mix. While nowhere near as revered as fellow residents Ben Klock and Marcel Dettmann, Fengler is nevertheless one of the infamous Berlin club’s brightest talents. Previously, Fengel has rarely stepped out of the shadows, choosing to let his mixing do the talking. Here, he steps into the spotlight with a mix that perfectly captures his unique early morning style. Like his best sets at the venue, Berghain 05 builds in waves, moving from paranoid, glitchy minimalist styles to stargazing electro via anthemic techno, bassy broken beats and classic British deep house.