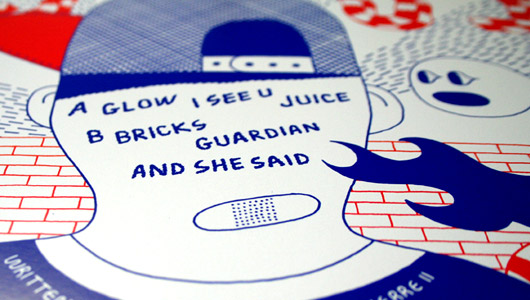 The annual late August release slump reared its head this week, which meant the Juno Plus editorial crew could get away with sneaking off to do radio shows and binge on burritos (props to Benito’s Hat). Thankfully, however, the decrease in quantity hasn’t reflected on the quality of releases.

The Blackest Ever Black imprint served up two editions of their fourth release from techno icon Regis – typically words such as throbbing, intense, sinister and frenetic were immediately thrown around in response. His first solo outing in a decade, A Syrian Tongue obviously comes highly recommended from us – especially the printed sleeve edition replete with a suitably grim and murky cover image.

Equally impressive, but lesser known, was the debut release from the Rawax imprint which premiered the frosted sounds of Unbroken Dubs, a Siberian producer who might easily be compared to Anton Zap’s Ethereal Sounds crew, though the four untitled productions betray a poise not dissimilar to Cosmin TRG’s forthcoming album. On a similar tip was Underworld, the Ryo Murakami drop for Baud, arriving in a rather attractive printed sleeve and replete with unique usage of the expansive grooves between the quartet of oh-so deep excursions into the moods and tones that sit between the lowest recesses of house and techno.

If you crave something a bit more urgent then we can suggest you search out Pacific Blue, the latest alias for the mysterious Shifted character who revealed a new imprint of the same name this week with a two part journey through Industry which channeled clacking, wall shuddering techno sounds to a bucking rhythmic intent reminiscent of the recent and underrated “Piper” from Shake Shakir.  [Naked Lunch] continued their impress Juno Plus endeavours as their latest twelve arrived dressed in orange and displaying not only a new Boddika production with a devious swerve that matches all his Swamp81 endeavours, but also a suitably titled SKUDGE Warehouse remix of former Instra:mental glory “Vicodin”.

Al Bleek’s Instra:mental pardner Damon Kirkham further settled into his Jon Convex shoes, following his impressive debut on 3024 with the excellent Radar on Non Plus. Fans of cult TV series will no doubt recognise the snatch of strings that announce announce “Radar” in such ominous fashion, though it’s the way this element is weaved amidst ever groaning insect-like bass and murderous strains of dystopian acid amidst the click clack of brittle rhythms that truly impresses.

Word out to the Luckyme crew who didn’t let the hangovers from their packed Edinburgh festival blowout get in the way of sending out the excellent new release from Lunice (whose artwork you can see up the top of the page). One Hunned presents a much more refined vision of the Montreal based producer’s sonic stance than last year’s debut, with tracks such as “Bricks” and “Juice” filled with the sort of dextrous MPC manipulation that makes us want to see Lunice live to fully appreciate him.

Meanwhile, over at Juno Download, the Suzanne Kraft EP on Running Back that so pleased us upon its vinyl release last week arrived in digital format – be sure to check it out if you haven’t already. Boutique New York label Uno maintained its strong run of form with an EP of sumptuous 2-steppy deep house from Canadian producer CFCF, featuring a particularity impressive D’eon remix.

The three track sampler for Marcel Fengler’s upcoming Berghain 05 mix plucked three of the finest cuts from the compilation and made them available in shiny unmixed format. Our pick of the lot was Vril’s “UV”: the artist, who has just  two EPs to his/her credit on Giegling, dropped a slamming, dubby techno track that simultaneously challenged the bass power of Shed’s Wax project and the loose, echo chamber tones of Modern Love. Elsewhere, the age-old love affair between techno and science fiction continued with the excellent Exaltics release on Creme Organization, while fellow Dutch imprint Delsin maintained its enviable knack of recruiting new, talented producers, with Area Forty One’s six track EP (released on ace Delsin sub-label Ann Aimee) displaying a maturity that many established producers lack.