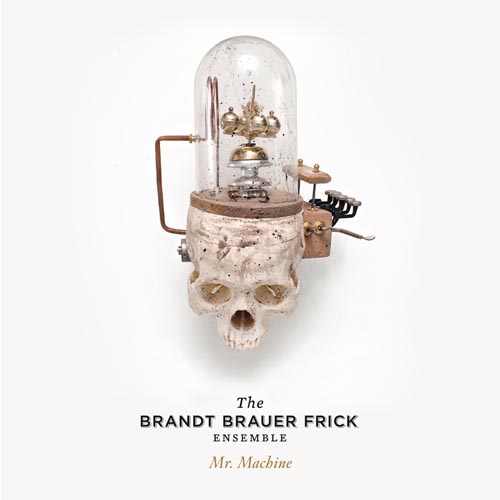 German techno outfit Brandt Brauer Frick have announced details of their second album, which sees the trio expand their band into a ten-piece ensemble.

Entitled Mr Machine, the album builds on the refreshingly original fusion of techno and classical music that was showcased on the 2010 album You Make Me Real with their new ensemble, dispensing with laptops entirely and performing their music entirely live.

The album will include reinterpretations of four tracks from You Make Me Real, three cover versions – Emika’s “Pretend”, “On Powdered Ground (Mixed Lines)” by Agnes Obel and “A 606 ‘n’ Rock ‘n’ Roll” by James Braun, and one new track. Recorded in just five days, the album is reportedly more than just a companion piece to You Make Me Real, with the new interpretations substantially changing the original material more than had been originally intended.

Aside from the trio themselves (Daniel Brandt, Jan Brauer and Paul Frick), the ensemble includes artists from the Berlin contemporary classical music scene, and incorporates violin, cello, harp, piano, trombone, tuba, timpani, marimba, vibraphone, live drums and percussion and even a Moog synthesizer. Those of you who live in London will be able to check out a live performance from the ensemble at Fabric on Wednesday, October 5 (tickets via Resident Advisor here).

Mr Machine will be released in October via !K7 Records.