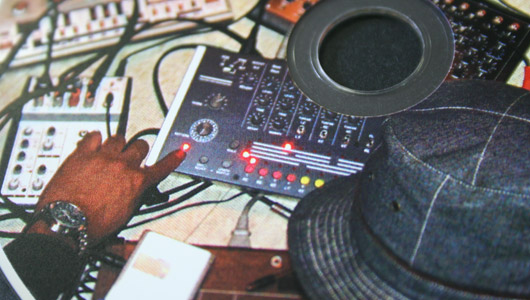 A dark seven days here in London town, with the riots that took place over the weekend and early this week taking their toll on the music world.

As many of you know by now, the Sony DADC warehouse in north London burned down, destroying huge quantities of physical stock belonging to more than 100 independent record labels. For this reason we were even more grateful than usual for the new arrivals this week, which served as yet another reminder that there are countless indie labels out there doing great things. No one typifies the DIY/independent spirit more than Detroit don Omar-S, and his album, aptly titled It Can Be Done, But Only I Can Do It, arrived today, gloriously free of PR pomp and ceremony. Upon first listen it seems we’ve got one of 2011’s most searching, fiercely original albums on our hands.

Elsewhere this week, fellow Detroit native Andrés dropped his third self-titled release on Moodymann’s Mahogani label – expectations were lofty but the former Slum Village DJ didn’t disappoint with seven tracks that wrapped your senses in his beguiling concoction of warm, soulful samples and tuff beats that straddle the lines between dusty beatdown and sensual housey deepness.

Stuart Li followed his excellent release for Fine Art Recordings (as Herman) with a missive for Dolly under his lauded Basic Soul Unit moniker, and New Jersey house deity Kerri Chandler released four thumping tracks on a 12″ that will no doubt soundtrack his summer residency at Ibiza sweat pit DC 10. Jackmaster’s always on-point Numbers meanwhile dropped its first reissue, scoring something of a coup in the shape of Pierre’s Pfantasy Club’s seminal “Mystery Girl (Set Me Free)”.

Underground Resistance alumni Gerald Mitchell, appropriately enough, resurrected his “Resurrection” track from 2004 in incredible style, along with two new original cuts. Oh, and while we’re sitting here chatting about all things raw and analogue, we urge you to check out the new EP from Perseus Traxx, which arrived on thick set vinyl sporting hand stamped artwork; contained within were five raw throwdowns drenched deep in the sounds of pure Chicago machine funk. And right on the This Week At Juno deadline buzzer (i.e. just before we retire parched to the nearest north London watering hole on a Friday afternoon), a 12 inch shaped EP from Regis – his first solo release under that moniker for 10 years – arrived via London-based imprint Blackest Ever Black.

Over at Juno Download, Kowton’s EP for [Naked Lunch] served as something of a definitive stance for the Bristolian, placing his sound between house and garage dynamics. The title track was cheeky and groovesome in a Metro Area kind of way, while  “Show Me” plumbed a steppier duct, with the hushed female vocal embellishing an overall feeling of creepiness – seemingly inviting you to a place you know you shouldn’t go, but want to visit all the same.

The Kowton release was one of many that explored the murkier depths of electronic music: Skudge arrived on Echocord Colour, with  “Surplus” subtly pushing the Swedish duo’s sound towards a more wide-ranging place. Elsewhere Giorgio Gigli supplied some more of his routinely fascinating brand of hypnotic, droning techno. The Italian’s work is invariably blessed with a deftness and light touch that does not belie its impact. “Indifferent Sight” was a perfect example; while its pulsating groove is rooted on the dancefloor, the silken-weighted melodic chords seemed to float in the ether. We also recommend you check the latest release from Miles Whittaker, aka MLZ and one half of both Pendle Coven and Demdike Stare. It will come as little surprise to learn that the prevailing mood is dark, eerie and even sometimes downright menacing – another compelling release from one of the UK’s great techno eccentrics.

On a significantly lighter tip, Freekwency popped up on ace label Voyeurhythm with a three-tracker that offers a contemporary take on the dubbed-out synth disco sound of early 1980s New York and labels like Prelude, Vanguard and (later) Salsoul. Meanwhile Mi-Ami band member Damon Palermo aka Magic Touch arrived on the excellent, and increasingly prolific, 100% Silk label with a surprisingly varied EP of retro-futurist dancefloor fodder, while Kyle Hall remixed Motor City Drum Ensemble and Melbourne’s Weekend Express decided they wanted to Go To Chicago.

Finally, on the CD front, the aforementioned Omar-S album obviously stole the show, but this week also saw the arrival of the Jamie Jones’ Fabric mix and two discs worth of underground Chicago disco and boogie from BBE.