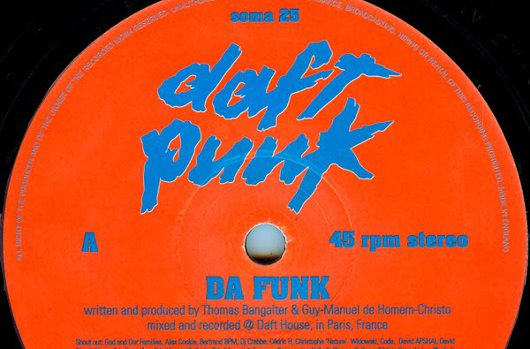 Glasgow based label Soma Recordings are to release a 20th anniversary CD compilation, including a previously unreleased Daft Punk track from 1994.

Entitled “Drive”, the recording is from Daft Punk’s early days in the mid-90s, when their first three 12″ singles were released by Soma. The track purportedly comes from an old DAT tape which Soma found simply labelled “Daft Drive”, which was originally delivered by the duo along with “Rollin’ and Scratchin”, but they were asked instead to finish “Da Funk”, which would be released as Soma25, making dance music history in the process. The original tape was put into an archive box and only discovered at the end of last year.

This gem makes up a small part of what looks to be a pretty exhaustive compilation for the label, which alongside Carl Craig’s Planet E is celebrating two decades in the business, with a three CD compilation set for release next month. The first CD features a disc of unmixed Soma classics, including the aforementioned Daft Punk track, along with gems from Slam, Silicone Soul, and Funk D’Void. The second and third CDs are mixed by label bosses Slam and Soma artists Silicone Soul respectively, and include remixes by Loco Dice, Adam Beyer & Jesper Dahlback and the Wighnomy Brothers, and original tracks from Alex Smoke and Desert Storm.