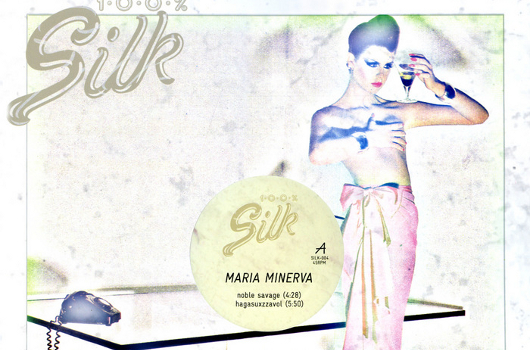 Team Juno Plus is excited by the news that London based promoters BleeD are playing host to the first UK live performance of Estonian producer Maria Minerva.

The event marks the latest in a line of expertly curated nights as BleeD approaches its first year in existence, having launched just before Halloween last year with the heady combination of Oni Ayhun, Oneohtrix Point Never, Teengirl Fantasy and Minimal Wave’s Veronica Vasicka. Minerva came to the fore after the hype LA based imprint Not Not Fun released Tallinn At Dawn, her debut of lo-fi disco in typically DIY cassette format earlier this year. Her subsequent EP on Not Not Fun’s sister label 100% Silk particularly stands out with its hazy approach to production which brings to mind a potent combination of Glass Candy’s sultry disco and Broadcast’s psychedelic textures.

The gig takes place at Dalston’s Shacklewell Arms next month and follows the release of  Minerva’s new album Cabaret Cixous – due out next week via Not Not Fun on slightly more traditional vinyl and digital formats. Whilst further support acts for the night are yet to be announced, BleeD overseer Casper C and Exotic Pylon boss and Quietus scribe Jonny Mugwump will be on hand to fill in the gaps.

The Shacklewell Arms is fast becoming of Dalston’s most interesting venues, having played host a number of exciting gigs in recent times, with BleeD playing host to Ford & Lopatin,  Tri Angle’s Holy Other and Hippos In Tanks artist Laurel Halo at the venue, as well as more intriguing events such as Eat Your Own ears hosting New York disco legend Peter Gordon and Beyonce’s sister Solange DJing at the So Bones night.