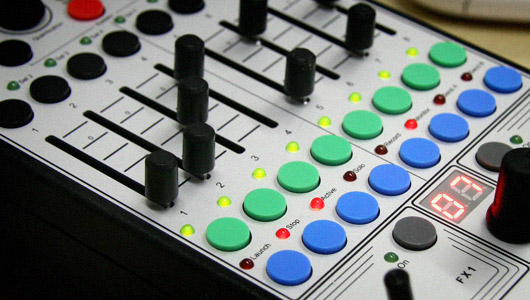 German controller manufacturer Faderfox is one of the best examples of the new breed of boutique audio electronics manufacturers that, despite worldwide recognition, still manage to operate on a cottage industry basis.

Their latest offering, the LV3 controller, looks a bit like the incestuous love child of the Faderfox LV1 and LV2 units, incorporating similar looking channel faders to its ancestors (these are shorter at an unproblematic 3.5mm). It also sports an additional brace of XY joysticks situated on the bottom left and right hand corners of the controller. It’s optimized for Ableton Live 8 and, thanks to the included MIDI remote folder, will operate on a plug and play level, rendering the pre-made live templates that shipped with the LV1 and 2 unnecessary. The LV3 is also compatible with most of the current DAWs and DJing software systems via MIDI implementation. 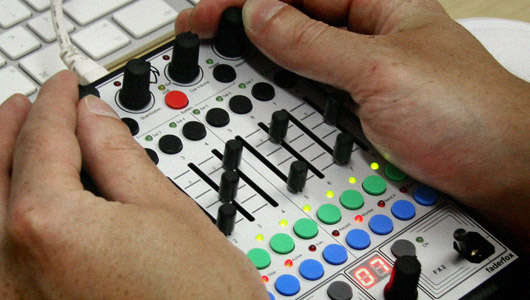 Out of the box, the four crowning rotary encoders are now smaller and rubberized, which means you can really get in there with the knob twiddling, to a greater extent than was possible with previous models. As it stands they are mapped to tempo, quantization, cue volume and master volume, which is a sensible move, and as previously mentioned you can MIDI them up to whatever takes your fancy. There are red LED indicators above each with circular buttons (1mm diameter) below for FX select and master volume, which, when depressed together, enable system mode for fine tuning/editing the controls and MIDI channel. Below this are a further seven buttons of the same size and action which will select Audio/MIDI tracks 1-8. It should be noted at this point that the LV3 works in grids of eight channels which can be cascaded together for sets requiring more tracks.

Our initial thoughts on the faders were that they’d be a bit of a novelty at this size, but once you get used to them they’re actually pretty precise with a decent action, plus the fact that you can get your hands on all eight at the same time (as opposed to just six previously) means that the intricacies of your manoeuvres will be far smoother. Moving downwards, you’ll find an additional eight green buttons which select or bypass the audio signal of each track.  Directly below this is another row of buttons mapped to launch, stop, active, solo, track record, monitor, send A, send B (in or out with no in between). Then it’s the business end of the controller, which features the two XY joysticks.  On the face-panel it says FX1/FX2, but we didn’t get time to check what they were assigned to during manufacturing as we had our own ideas of how best to utilize these sticks of joy (as will everyone). In between these is the scene encoder which can be used to navigate left/right and up/down with push launching each clip. There’s also a two part numerical LCD display which shows the scene you’re currently working on. 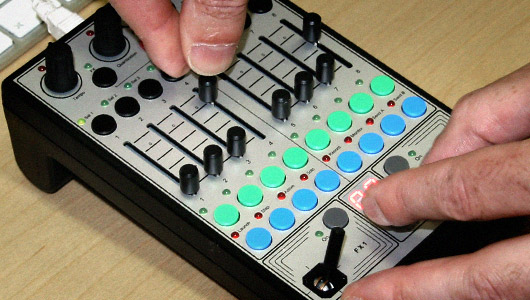 Operation is smooth once you’ve updated Live’s app resources folder. Everything works as it should, with the workflow far more streamlined than the LV2. The fact that everything is laid out for you with its own button eases the confusion of single faders or buttons controlling multiple parameters. The XY joysticks allow you to further expand the capabilities of the effects, and are perfectly suited to controlling the everyday transport functions of the LV3. You’ll certainly feel like a professional when using this controller, whether you’re programming it or using it mapped or straight out of the box – it feels like a tool rather than a toy. Although it’s largely catering for intricate live sets or advanced DJing, the LV3 shouldn’t be overlooked by Traktor users who want that extra bit of performance from their set up, or studio users who want a more live way to express their modulation as opposed to the constraints of faders and rotary knobs.