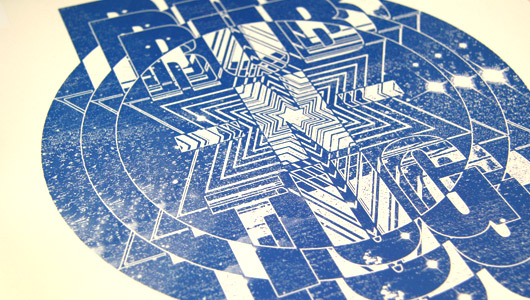 Heads are still clearing in the Juno Plus office after last night’s excursion to Dalston to see Ford and Lopatin light up the Shacklewell Arms with an impressive live show filled with drum machine workouts and knob twiddling – just rewards for another week filled with excellent releases.

Deep house is where this week’s heat was, er, deepest. Naturally, a new Kyle Mudda Fuddin Hall twelve inch arriving is cause for celebration and the latest hand stamped Wild Oats missive includes two of the Detroit producer’s most delightfully oddball takes on house to date, with perhaps the filtered of the B Side finding the most favour here. Elsewhere the much vaunted relaunch of the Secretsundaze label arrived in fine style with Brawther getting the George Fitzgerald remix treatment.

Over in the disco dept, the first tantalizing fruits of how the forthcoming Rub N Tug album might sound finally surfaced in the shape of Scanners which came replete in some suitably psychedelic artwork (as shown above) Also worth mentioning is the excellent Cosmo Vitelli EP not least for the addition of remixes from Tim Paris and Comeme’s Daniel Maloso. Those who like their disco with a southside flavour should check the Fantastic Man and Jeremy Glenn releases.

The Delsin fans here were treated to a double dollop from the Dutch label, as offshoots M>O>S and poorly behaved little cousin M>O>S Deep both surfaced with releases from Aroy Dee and RAG respectively. Not to be outdone, a new Ital release on Lovers Rock was just as good – filled with expert pitch shifting rhythms and backed with a sludgily demented remix from Hieroglyphic Being.

On the download front Night Slugs supremo Bok Bok dropped the Southside EP – his first official release on the label that he launched in 2010 with L-Vis 1990 to richly deserved acclaim. Elsewhere in the world known to lazy writers like us as the “bass music community”,  Deep Medi Musik maintained their high standards in 2011 with the welcome return of VIVEK on a plump four track selection that matched his earlier release Pulse in the how to impress Juno stakes.

On a digital discoid tip there were new releases on International Feel, Nang and Under The Shade, whilst Graeme Clark and Craig Smith aka 6th Borough Project finally unveiled their debut album. Thanks to three previous 12″ and digital samplers, most of you will have a fair idea what to expect from the Scottish house-disco fusionists, but it’s still worth listening to One Night In The Borough in its entirety. Clearly designed as a quote-unquote proper album, it’s beautifully programmed and packs a whole skipload of great ideas (not to mention brilliant samples) into a thoroughly entertaining 90-minute journey.

CD-wise the excellent (and unmixed) Laid compilation arrived just in time for weekend consumption, featuring sumptuous deepness from the likes of Lowtec, Kassem Mosse, John Roberts, Marcello Napoletano and Rick Wade – i.e. lots of producers that we really, really like. Big tippage on that one!