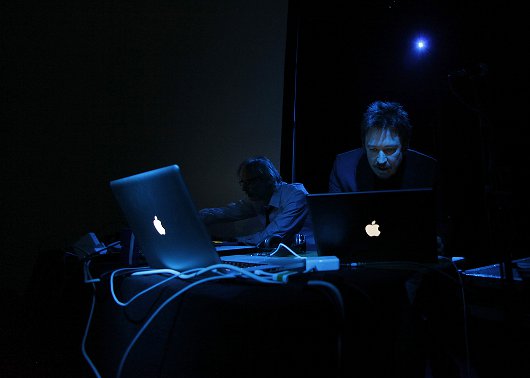 Mute Records is one of the most successful independent British labels still in operation, having been formed in 1978 and still going strong today. As such, their discography is broad, and not an easy one to find a way into for the uninitiated. The last 10 years have seen them release high profile records from Moby and Goldfrapp, as well as less accessible, but still equally as significant albums from Grinderman and Liars, but it’s easy to forget that their beginnings were rooted in the industrial sounds of the early 80s. Label founder Daniel Miller originally formed Mute to put out his first single as The Normal, and subsequent years saw him release similarly dark electronic music by Fad Gadget, D.A.F. and Depeche Mode. It was at this time that Mute’s initial musical aesthetic was formed, one that married the fury of punk rock with the electronic elements of the burgeoning synth pop movement.

The Roundhouse’s Short Circuit festival this year invited Mute to program two nights of music celebrating the label’s illustrious history, and the Friday night event seemed to be an attempt to bring together some acts from the darker and more severe early end of Mute’s musical spectrum, along with a sprinkling of more dancefloor orientated artists. Despite the Roundhouse’s more famous connections to 60s psychedelic rock, the main space itself, a converted railway turntable shed with an industrial aesthetic, was the perfect compliment to the music being played on the night.

The first thing that greeted you as you entered the building was a carousel filled with unique modular synthesisers that could be played freely, and it was particularly impressive to see the organisers of the Short Circuit events including an interactive element that gave an insight into the physicality of electronic music. The inclusion of such vintage equipment was particularly fitting given the age of a lot of the acts playing on the night; the sea of black clothing that presented you as you entered was quite striking, and the number of people there who were over 40 years old served to remind that Mute are a label with an aesthetic that still has a pedigree and rabid fanbase that most labels today would struggle to achieve.

The night was opened by Recoil, a project of ex-Depeche Mode member Alan Wilder, who played a laptop performance of particularly heavy EBM and proto techno. His debut on Mute, 1+2, is particularly experimental (and would be an interesting companion piece to Manuel Gottsching’s E2-E4 which was released two years earlier), though live their performance was pure industrial techno, and almost unashamedly crowd pleasing, including Recoil’s own particularly dark versions of Depeche Mode’s “Never Let Me Down Again”, and, in a collaboration with Nitzer Ebb, “Personal Jesus”. These were a joy to listen to, stripped of most of the originals’ pop sensibilities, and warped into new mechanical forms, complete with crushing industrial beats and devastating bass. The performance of “Personal Jesus” was particularly brilliant, turning it into something akin to an extended Gavin Russom jam, with searing synth bass and occasional hints of acid; most of the original lyrics were omitted, with only the “Reach out and touch faith” refrain retained and repeated, further contributing to the techno leanings of the cover. But what gave it a real impact was the inclusion of three live drummers who, in conjunction with Recoil’s electronics, created a totally devastating combination. 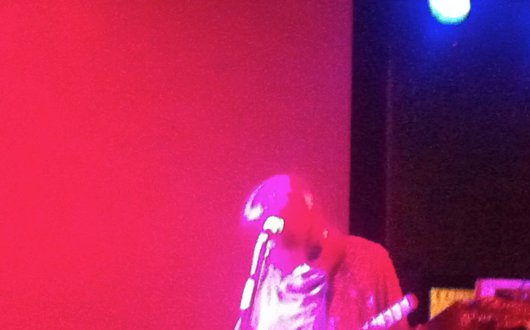 With the crowd on a high, punk-influenced EBM act Nitzer Ebb then took the stage. There was as much adoration from the fans for them as Recoil, but for me, after the brilliant opening, it was, at least sonically, a little disappointing. There were no live electronics on stage, simply a laptop that was playing the synths, the only live elements being the drums and vocals. Given that bass is such an essential element of EBM I personally would have preferred to have heard them accompanied by a live analog rack creating some devastating frequencies, but they did put on a great show, with just the right amount of requisite camp in their performance that EBM often relies on to be a success. Frontman Douglas McCarthy looked particularly at home wearing sunglasses in the pitch black space, strutting across the stage delivering every line with a particularly knowing sneer which complimented the militaristic backdrop projected behind them.

The most exhilarating performance of the night came from Chris Carter and Cosey Fanni Tutti, performing a collaboration with Factory Floor guitarist Nik Void. Given Factory Floor’s obvious debt to the music of Carter & Tutti in their various guises, as well as the sounds of early Mute in general, this collaboration was pretty much a dream pairing. The contrast to Nitzer Ebb could not be more distinct; there was no element of theatricality involved, instead what the audience were treated to was a totally stripped back performance of proto-techno, devoid of the thick bass pulse of Nitzer Ebb’s brand of EBM. Standing between Tutti and Void, Carter was responsible for keeping a constant 4/4 pulse which was sufficiently gritty enough to get the room moving, but it was the brittle guitar work from Tutti and Void that made the whole thing so unique. Using a bow to play her guitar to creating discordant scrapes, whilst Tuitti used a slide to bend her notes; Void seemed to work almost telepathically in unison with Tutti and Carter, which was particularly impressive given the 30 years of experience the couple have working with each other. It was almost the perfect fusion of noise and techno; on the face of things the bizarre sounds being created by the two guitarists seemed random, but there was a distinct sense of precision and structure behind the scenes. 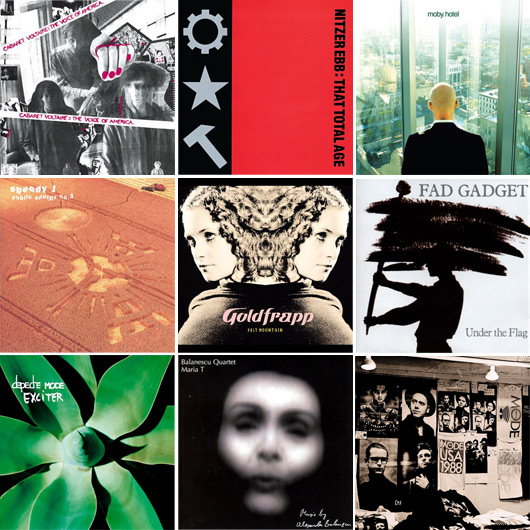 The uniquely metallic quality of the sounds being created from the two guitars working in unison were as compelling as anything that could have been created by a synthesiser, and was arguably, and unexpectedly, the most enjoyable dance music all night. The reception they got was rapturous, and the only criticism I could level would be that as was taking place in the tiny studio theatre, the room quickly reached capacity, and there were a lot of disappointed people waiting outside. Having the performance in a space any larger would likely have diminished the sonic impact of their music, but I couldn’t help but feel the majority of the crowd would rather have had the chance to see them regardless.

After this was the esteemed Thomas Fehlmann in the tiny bar area upstairs. Musically, he was probably one of the lightest artists on the bill, but he made an interesting contrast to the severity of the rest of the music, and his obvious debt to the motorik rhythms and odd melodies of krautrock only sought to highlight the German influences that are so obviously a strand of Mute’s musical DNA. However, the headline act of the night, playing in the main space, was Richie Hawtin. Playing against a backdrop of glitchy black and white visuals, Hawtin played a laptop set of typically stripped back minimal techno, and the large round space, with its cast iron pillars and exposed brickwork was better than most warehouse spaces are at conveying the scale that his sound needs. 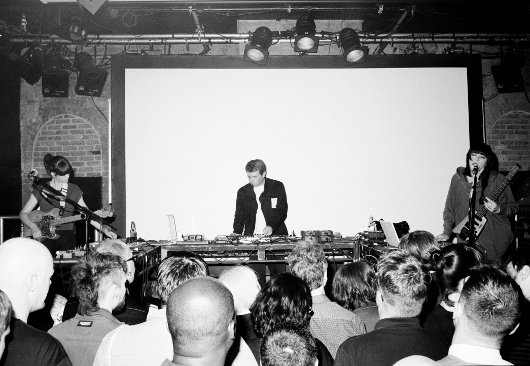 Hawtin’s inclusion on the line up initially seemed quite odd; although he has released material through Mute in the past (as Plastikman) there seemed little to connect him to the majority of the music on the bill, but after the Carter Tutti performance, it actually made a lot more sense, with Hawtin’s utilisiation of clockwork rhythms and musical colours steeped in black seeming particularly appropriate within a night of primarily dark electronic music. Like Chris Carter, Hawtin has a great understanding of musical structure, and how to use frequencies to affect the listener, and his set was primarily intended to evoke a pure body response rather than an emotional one. Hawtin certainly knew how to work the crowd, but compared to the previous acts his set seemed lacking in a commensurate amount of coarseness, and one couldn’t help but feel, given his recent resurrection of the Plastikman name, and subsequent live sets under that moniker, that a Plastikman live set would have been more appropriate within the context of the night.

However, his short, loop based approach to his set, rather than playing more longform tracks, did help to highlight his place within the hidden mathematics and mechanics that function behind the scenes of a lot of Mute’s darker output, almost as if the human element in their acts is part of a closed system and merely a conduit for the machine’s will. It was this seeming fetishisation of the machine (further highlighted by the inclusion of Felix’s Machines, an intricate mechanical installation that plays music when activated) that made the night as a whole a particularly enlightening insight into the trajectory of techno music over the last 30 years, and served to remind people that Mute’s place within the history of electronic music is one, that although frequently overlooked, is as important within the development of dance music as any label from Chicago, Detroit, or Berlin.