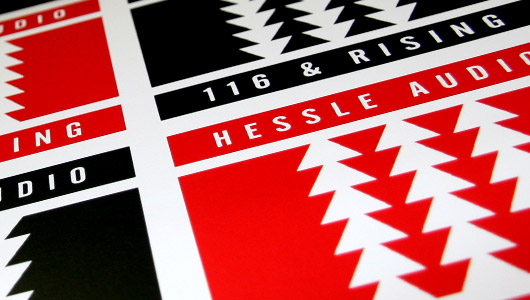 This week it was pretty hard to look past Hessle Audio’s stunning 3xLP compilation, which scored a rare 10/10 from Juno Plus for both presentation and sound.

We won’t go on about it too much here – we already used up our weekly quota of gushing praise in this review – but needless to say we were unanimous in our admiration of the luxuriously packaged triple vinyl compilation.

However in the 12″ single stakes our affections were torn between Prime Numbers and FXHE. There was a welcome return for Linkwood on the former, with the Scottish producer presenting three variations on the house theme in the first of two EPs due out this year on Trus’me’s excellent label. “Dirty Love” called shotgun, bossing the A Side with the sort of rough around the edges warehouse filth that demands movement of your feet. On the latter, meanwhile, label boss Omar S dusted off an (almost) forgotten Marc Kinchen gem from 1993 – essential US garage business.

Needless to say, when one of our favourite labels (read here: Dekmantel) calls on one of our favourite producers (read here: Vakula), it really does put us in a good mood. The on-fire Ukrainian opened proceedings on his debut for the boutique Amsterdam based label with “Picture Of You”, which unfurls majestically from a warm deep house joint with aquatic melodies and cosy pads to a certified end of night anthem – just wait for those stuttering keys to come in towards the end!

Elsewhere Claremont 56 continue to disregard the genre boundaries, releasing the 60s West Coast rock of Torn Sail and two arrangements from Can legend Holger Czukay in the same week – both come highly recommended. Delusions Of Grandeur made a stylish entrance into the album game with a sumptuous triple vinyl edition of the 6th Borough Project long player. One Night In The Borough sees Graeme and Craig drop a heady thirteen track selection that covers the sort of warm, low slung, expertly executed multi-tempo music which sits between house and disco.

On a bass tip, Lazer Sword don Lando Kal stepped out for a solo endeavour on the always crucial Hotflush imprint (and it’s a bit special, we can tell you), while Punch Drunk scored another winner, finally unleashing Andy Mac’s “Everytime” – a track which has become a secret weapon for the Bristol bass cognoscenti.

Meanwhile Lord Jeff of Michigan returned with a killer sampler 12” featuring highlights from his recent album The Power (which itself seemed to fly under the radar of many), while the mysterious Livejam-affiliated Appointment returned with more dusty house-techno thumpers.

Over at Juno Download, Young Turks continue their assault on releasing good music, paying no heed to genre politics in securing some all too rarely seen original material from Barcelona resident John Talabot. The tracks on Families really provide further evidence of the somewhat mysterious producer’s endless progression into a musician of real talent, perhaps most notably on the title track collaboration with Glasser’s Cameron Mesirow.

On the CD front, Bullion’s excellent non-album You Drive Me To Plastic arrived via Young Turks. Occupying the space between mixtape, album and EP and doing it brilliantly, the young West Londoner has delivered a dizzying collage of tempo changing sampledelica that slips between the obscure and the recognisable, the beatless ambience and the stuttering syncopated crate digger’s delight. Disco beards will no doubt have already sniffed out the Larry Levan Greatest Remixes Volume 1 CD, while the Hyetal album on Black Acre should be filed away in a drawer marked “essential listening” alongside 93 Million Miles, the debut full-length from longtime friends and sometime musical partners Mark Pritchard and Steve Spacek.

That’s it for this week folks – happy hunting.