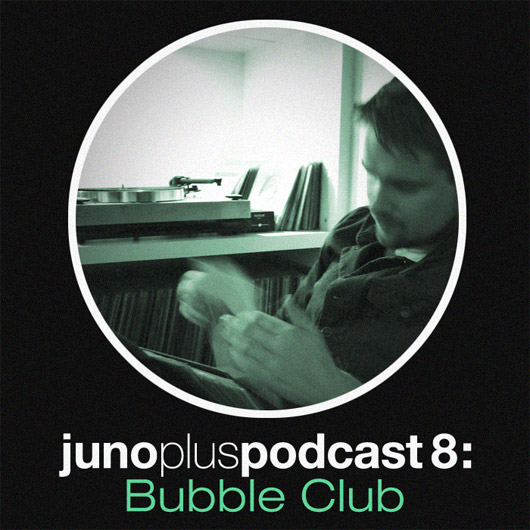 Dan Keeling aka Bubble Club, the man behind the eighth Juno Plus podcast, announced himself to the record buying public in 2010 with three excellent 12″s that touched on the dubby side of disco.

Wrapped in distinctive dotty artwork, the records caused an immediate stir amongst the disco cognoscenti, with strong original cuts backed with remixes from Dr Dunks, Soft Rocks and Brennan Green. Prior to that his only production credits were in collaboration with UK techno ledge Kirk Degiorgio (as Beetlejuice and Critical Phase), but his links to the music industry extend far beyond a few 12″s.

Before dipping his toes in the production pool, Keeling worked as a talent scout at A&M Records, before moving into an A&R role with Parlophone, where he continued to unearth new talent (and was described as a “tall, handsome man with a big jaw and a little beard” in a Guardian article from 2005, which is almost certainly a complement). From there he went to work with the legendary Island Records, where he rose the role of MD before deciding to pursue a path in DJing and production.

Next up on the release front for the West London based producer/DJ is a follow up to The Goddess, his recent 12″ for International Feel, due out this autumn. His Juno Plus podcast, mixed using two 1210s and a Pioneer mixer (“no cheating!” he assures us), has an emphasis on darkly beautiful electronica, with newer material from Actress and Storm Queen complimented by some vintage Transmat and Trax business.

Juno Plus Podcast 08 – Bubble Club by Juno Plus on Mixcloud