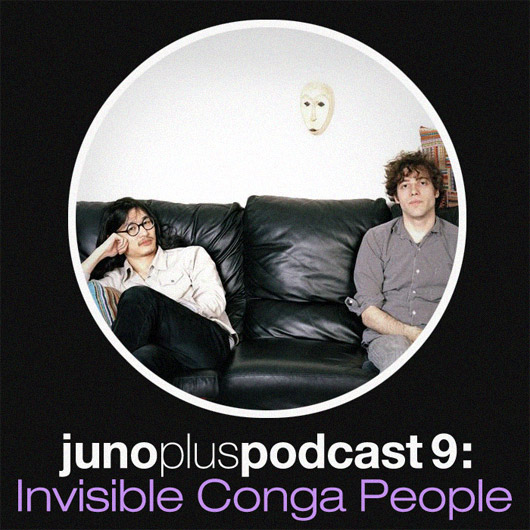 New York duo Invisible Conga People celebrate their return to the production fold with a mix that incorporates a heady selection of late night electronica, early industrial and breezy ambience.

Those of you who follow the Italians Do It Better imprint with a hawkish eye will no doubt recall the Weird Pains EP from 2008 that quickly earned Invisible Conga People – real names Justin Simon and Eric Tsai – a cult-like following. This was only enhanced by the fact they then seemed to disappear more or less immediately, save a couple of remixes of Woolfy vs Projections and Simian Mobile Disco.

As Justin explains: “We got ousted from a couple of rehearsal spaces and it slowed down our recording process. We were also focusing more on live performance than recording for a while. The live version of the band was very different from the recorded version. Eventually, the live version of the group became a bit draining and kind of a money pit, so we retired it. After we stopped playing live, we started up working again on recordings we had abandoned for a while.”

Swooping to the rescue in 2011 was the iconic NYC label DFA, who pressed up four absolute gems on the In A Hole EP, released last month (more on that here).  Speaking about the hook-up with James Murphy’s label, Justin explained to Juno Plus that “DFA were all very supportive when the first record came out, and had us play a few of their events over the years.”

“At some point I was talking to Jon Galkin and the idea came up of DFA doing the next record.,” he continued. “Years later I gave him the songs.”

Justin said that although there were “no specific ICP plans at the moment”, both he and Eric were keeping busy with individual projects.

“I am working on a solo something tentatively called Sophisticated Filth. I’ll probably start with a 12”, but hopefully play live with it eventually too. I’ve also been making music for a group of performance artist friends called Yemenwed.

“This summer I’m also reviving my record label, Mesh-Key, to release a couple of very old recordings – an album recorded at DFA studios ten years ago with a punk band I formed when I was living in Tokyo called We Acediasts, and a collaboration I did with Chie Mukai. I might also be doing some DJing here and there, and Eric periodically plays in a group called New Humans.”

Their mix for Juno Plus is an ethereal jaunt through the more obscure ends of 70s and 80s industrial, minimal, modern classical, jazz, avant garde and ambient. In a word, sublime.