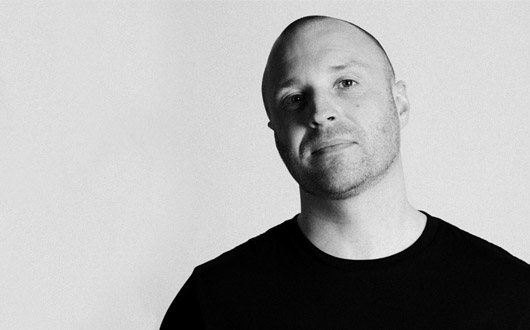 The name James Ruskin is so interwoven into the fabric of British techno that you almost take him for granted. Like so many producers of his era, his early forays into production were informed by a passion for hip-hop and electro, and he launched the Blueprint label with Richard Polson (RIP) in 1996, arguably when UK techno was at its peak of popularity.

Since relaunching after a brief hiatus in 2009, Blueprint has re-established itself as a torchbearer for immaculately produced techno, serving as a showcase for a brace of Ruskin/Broom hook-ups, Ruskin in solo mode and a 12″ from Valmay. Perhaps most eye catching has been Ruskin’s O/V/R project with Sandwell District don Karl O’Connor, the fruits of which first appeared in 2009 but really gained attention last year thanks to a sumptuous clear vinyl pressing. “Post Traumatic Son” has subsequently been remixed by some techno VIP’s, namely Robert Hood, Marcel Dettmann, Ben Klock and DVS1.

Although he’s seen two generations of techno producers choosing to cloak themselves in anonymity, Ruskin has never hidden behind anything. That’s no to say he’s totally breaking type; the black t-shirt and no-frills shaved head combo he’s running in his latest press pic couldn’t really be more techno. Juno Plus scribe and TEA blogger James Manning fired some questions through to Mr Ruskin ahead of this weekend’s Blueprint showcase at London’s Cable, which features performances from Surgeon, Luke Slater, O/V/R and of course the head honcho.

If 2010 was any indicator, Blueprint looks to be on top of its game right now. Rather than dwelling too much on the past, however, what do you hope to achieve with Blueprint over the next few years?

I think what we want to achieve is the same as it was when the label began sixteen years ago, and that is to have a platform to experiment, and release music we believe in. Our main focus at the moment is on the larger projects that are underway, and expanding the idea of presenting the music beyond the usual two-hour DJ set.

You recently hosted a Blueprint Klubnacht at Berghain. How was it?

It couldn’t have been better. Everything came together to create a truly amazing night; I heard afterwards it was still going at 11pm Sunday! We have the next one in London at Cable with Surgeon, Luke Slater, Karl O’Connor and myself as O/V/R and Nick Dunton. We also have Sigha, Shifted and the guys from Colony taking care of the second area so I’m sure it will be another really big night.

You played live as O/V/R with Karl O’Connor that night too. Can you tell us a bit about that project, how did it come about and what is involved in the live show?

It is something that evolved over a long period of time, we had been playing a lot of gigs and from that we started putting together a plan for O/V/R. I think it was just a natural progression that has brought us to where we are now, and because we don’t tend to plan and put time restraints on the project, things just happen when they happen. As for what’s involved in the live shows, well they are based around a collection of increasingly random equipment, and tend to swing between structure and total chaos.

Can we expect any new O/V/R releases in the near future?

Yes, and I think it will always be an ongoing project.

When you first started Blueprint you said “The original idea for the label was a vehicle for Richard [Polson] and I,” Since relaunching Blueprint in 2009 we have seen releases from Valmay, O/V/R and Mark Broom. How open is Blueprint to receiving demos and signing new or other artists post-2009?

We are always open to new artists and music, and you will see the roster expanding as the year progresses but we are very specific about what we want for the label, but that isn’t down to style it’s about feeling. The latest signing is Sigha who will have his first release for us next month. I hope as we try to expand people’s perception of what the label is after, we will receive some more exciting and eye opening demos.

“The O/V/R live shows are based around a collection of increasingly random equipment, and tend to swing between structure and total chaos”

Valmay’s Radiated Future EP was the first we’ve seen of Paul Mac in several years. What brought on this release and should we expect more from the pseudonym happy Paul Mac?

They were tracks that Paul sent me with a view to playing – I’m not sure they were ever sent as a demo – but as soon as I heard them I knew I wanted to put a 12″ together. Valmay was created as a project that Paul could expand, and there is new material being written as we speak.

You have collaborated with a few artists over the years, Richard Polson with Outline, Karl O’Connor with O/V/R, Surgeon, Oliver Ho and Mark Broom. Is working with someone in the studio something you enjoy?

I like working with people that I connect with musically and also on a personal level. After you have worked on your own for a long time it is good to have a different approach and have someone to bounce ideas off. I think the initial stages can be quite solitary, but I enjoy the process of reconstruction a lot more when I’m collaborating with say Mark or Karl. I think you have to have some kind of take on another person’s thought process otherwise it just doesn’t work. 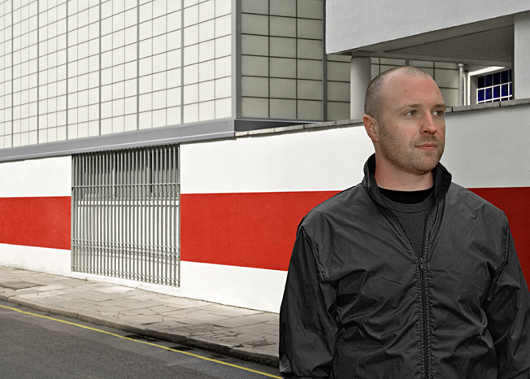 Are your collaborations with other artists done with the two of you physically together in the studio?

My early collaborations with Richard and Surgeon were always done with us in the studio, but now things are different because with the technology we have these days, the music tends to mutate over time so its more a case of working separately to outline certain ideas, then coming together at different points. Also the beauty of the internet means you can work really quickly moving ideas backwards and forwards between studios without annoying the shit out of each other stuck in a small space spending all day making a ‘ping’ noise that you won’t end up using!

How important is a working dynamic within a studio space when working with someone?

You have to have a dynamic with whoever you collaborate with whether you are in the studio together or work remotely, otherwise the results will always be labored and feel fake.

“The beauty of the internet means you can work really quickly moving ideas backwards and forwards between studios without annoying the shit out of each other, stuck in a small space spending all day making a ‘ping’ noise that you won’t end up using!”

Robert Hood and Lucy are the latest names to get the James Ruskin treatment. The two are a great case study in comparing techno styles, Robert Hood being second wave Detroit whilst Lucy and his Stroboscopic Artefacts imprint is considered cutting edge in today’s contemporary European scene. Did you have a specific ideal and/or approach when it came to remixing these two?

The thing with all the remixes I have done recently is that I didn’t want to stray too far from the original. Robert has inspired me for many years and it was a big thing for me to be asked to create a mix for M-Plant, so I wanted to treat the original with the respect it deserved. With the Lucy remix, the original already had a depth that I related to so it was again a case of expanding the idea and injecting my sound. They are both very different mixes but the approach was essentially the same.

Many DJs who had the opportunity to play at Tresor pre-2007 credit the club in helping them refine and improve their productions. Has this been the same for you?

No – I wouldn’t say it helped improve my productions. The label in particular was a very important part of my career, especially during the late 90’s and early 00’s, but refining my productions isn’t something that I associate with the club.

London’s techno scene may at times be somewhat shadowed by the dominating Berlin. With clubs such as Cable now hosting regular techno events would you say that London’s scene is evolving to something akin to its late 90s glory days?

Well I’m sure it would have been a lot more difficult to have clubs like Cable hosting Blueprint nights a few years ago, so things are certainly moving in the right direction. I think musically we are attracting the next generation who want to go out and hear real techno and find out more about it. Also for some time now there has been a lot of cross-pollination between genres which creates an interest that maybe wouldn’t have been there before. The underground has always existed in all forms of music and when things become sanitized people will search out alternatives. Luckily we are also at a point in time where a lot of really interesting and diverse music is being made.

You are also a father. German duo Modeselektor say that when touring they are always on the last plane to their shows and on the first plane home in order to spend more time with their family. Has being a father your affected your touring schedule and time in the studio?

It affects everything, and is mainly about time management, which I don’t think anybody in our industry really gets to grips with as it’s a totally alien concept. I have very set times in the studio now which took me a long while to get used to, but I think it has actually made me more productive as putting things off until later is not an option anymore!

What’s next for James Ruskin?

At the moment I am in the middle of an album with Mark Broom that is consuming all of our studio time. It’s a pretty major project that we intend to tour with a full live show later in the year. It’s always quite daunting when you decide to start something like this, but things are taking shape really well, and we are having a lot of fun pushing things in different directions and seeing where they end up.