Despite its many charms, Minehead’s Butlins resort in mid March is patently not Barcelona. Yet it’s here, out of season by the Bristol channel, that a musical movement is brewing to rival that of Sónar as one of the world’s premiere events catering for discerning electronic music.

Bloc, now in its fifth year, has grown exponentially since its launch and the line-up assembled for the 2011 showcase was, on paper, its strongest yet. In many ways it’s a canny move to book the event so early in the year, as it allows organisers to operate unencumbered by the goings on of the UK/European summer festivals that duke it out from June to August. It also offers actual beds to revellers, and those of us of a certain vintage welcome the chance to rest our weary heads somewhere comfy, rather than climb into a freezing tent and sleep for exactly five minutes before waking up to scorching sunshine/pissing rain (delete where applicable) and a parched mouth.

And so it was the Juno Plus editorial team booked into a charming B&B on the Minehead esplanade (alas, no Butlin’s chalets for us) and entered the world of Bloc. Due to its forward thinking bookings, the Bloc crowd has a decent proportion of educated music heads. For what it’s worth, our method of judging the ‘head’ count at a festival involves assessing the ratio of people wearing obscure label t-shirts – sadly, apart from one sweaty bloke in a Delsin top, we were left a bit disappointed in that department.

Friday night saw Modeselektor take over the heavily carpeted Red Bloc ballroom for the evening’s entirety. The German duo are a dab hand at curating events, having put their name to a stage at Berlin’s Melt festival for the past couple of years. The Modeselektion takeover kicked off with a DJ set from the elusive Siriusmo, the Berlin producer who’s always professed to being more at home in the studio than on stage. Whilst we were left wondering what a live set would have sounded like, Siriusmo proved that track selection can sometimes trump technical proficiency, swiftly working through a selection of his own idiosyncratic brand of twisted electro house and other tracks, such as “Bonhomme”, a highlight of SebastiAn, Seb Tellier and Mr Oizo’s Steak soundtrack, before finishing with his irresistibly catchy “High Together”. 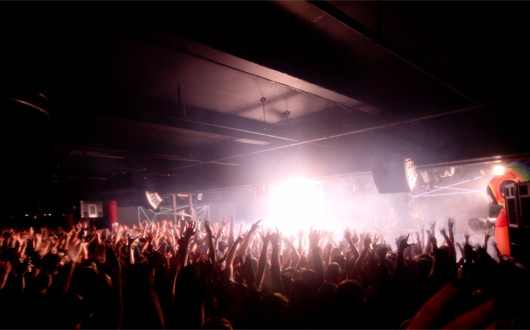 Ikonika – who might have opened with Bashmore’s “Ask Yourself” (some of our track IDing notes are a bit sketchy) – took over from here and was building a solid vibe until a power cut brought things to a momentary halt. She resumed and to her credit started banging it out immediately, veering through a typically upfront selection that spanned tempos and genres. Seeing a packed Red Bloc grind to heavily side chained synths at 10:30pm on the opening night gives you an idea that this festival starts as it means to go on.

Berlin’s Apparat then took to the stage to further whip up anticipation ahead of his Moderat cohorts MDSLKTR, delivering an hour of music which honed in on some wonderful broken beat techno that nailed the balance between melody and visceral beats. Full props also go to the shaggy haired producer for expertly twisting Felix Da Housecat’s criminally underused DJ tool “Kick Drum”. By the time Gernot and Seb took to the stage, aided by some monkey suited hype men, Red Bloc was fully primed, and it took little time for the Monkeytown overseers to destroy Red:Bloc – their performance ending with a mass stage invasion – as depicted above.

The artist formerly known as Pearson Sound opened with some Night Slugs white label heat, and it was with some reluctance that we took the night on a tangent to see Shackleton over at Tec:Bloc. By this stage of the night the Juno Plus team was in heads down mood so the Berlin-based producer’s dark, twisted live show of densely packed pitter-patter rhythms and bewitching drum programming was just the ticket. For legal reasons we are not allowed to detail why plans to round off the night with Ben Klock were scuppered,  though we can say it involved an over indulgence in a variety of alcoholic shots and a less than satisfying trip to Burger King.

Having decided to give the Saturday afternoon showcase hosted by the gravel-voiced MA Hobbs the slide in favour of cheap Guinness and the most flagrant example of Scholes dirtiness in recent times at one of Minehead’s local establishments, we hightailed it Butlins in time to get comfortable for the last ever live performance from Moderat in its current guise. Anyone who has witnessed their live show before will know they have you in the palm of their hands as soon as the beat drops in set opener “A New Error” and an enraptured Centre Bloc audience remained in thrall till their last note.

A swift saunter to the Resident Advisor curated Jak: Bloc – a room sadly cloaked in the inexorable funk of unwashed bodies – and we arrived right on cue to see R & S wonderkid Space Dimension Controller, eschewing the Astronaut themed regalia for a blinged out gold Adidas jacket/ intricate shaved head look and treating a bumping audience to a typically unique selection of house-centric future funk. Up next, Eglo-head Floating Points opened his hugely enjoyable all-vinyl set with Michael Wycoff’s “Looking Up To You”, before launching into a wildly eclectic selection that also included jagged IDM and an impromptu switch into Carl Craig’s epic remix of Throbbing Gristle after some vinyl jumping difficulties.

The line-up for Aphex Twin’s headline performance in Centre:Bloc was predictably starting to form before Four Tet took to the stage, so Jimmy Edgar’s live show in Red: Bloc was the obvious choice; it was a decision we’d live to enjoy immensely. Arriving soon after he started to a somewhat sparse crowd, Edgar’s set was truly explosive, focusing on a raft of material new and old that contained enough energy to soon pack out the room and forcibly shake us out of our hungover slumber. He nailed the vocodered vocals on album hits “Hot Raw Sex” and “Function Of Your Love”, and in a moment that probably betrayed how much fun he was having, slipped between techno, jungle and dubstep tempos within a matter of 60 seconds.

Having reviewed the prolific and distinctive techno stylings of local hero The Advent on many occasions in recent months, a certain guilty pleasure-driven inquisitive sensation washed over the Juno Plus team, so we left DJ Funk slamming out his Justice remix in time to hear the classic percussive thump of Green Velvet’s “Flash” emanating from The Advent’s booth. Slightly baffled at the sub 130 BPM nature of such a set we returned to the RA stage where this disappointment was more than trumped by the closing stages of Soul Clap’s decidedly self congratulatory set comprised of wedding disco mashups and on stage hi-jinx with their entourage. Thankfully the Simple sounds of Will Saul, who followed soon after, turned bad thoughts to good with FCL’s “Let’s Go” mixed perfectly into “Your Words Matter” from Ramadanman & Midland. 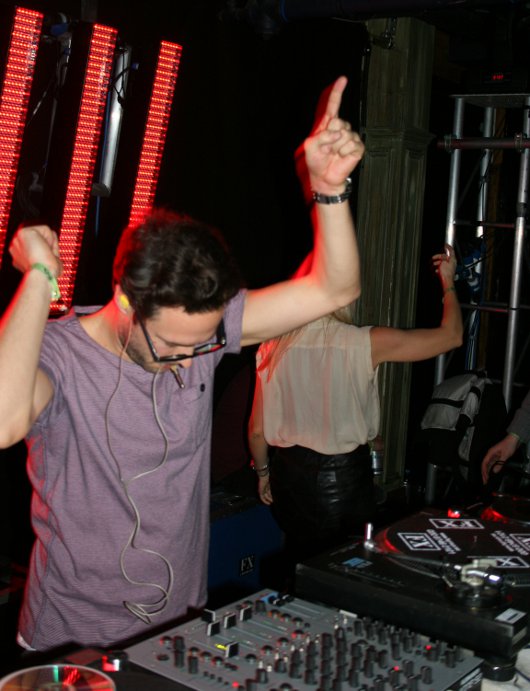 With the clock rapidly approaching 4am, a brief chalet shaped pit-stop was needed before returning to the slightly honking madness of Jak:Bloc for the elongated acid delights of the Jackhammer line-up, with Juno Plus favourite Legowelt’s 6am set rounding off an incredible nine hours of music.

Many a hour passed on Sunday before we felt sufficiently roused to enter the fray one more time. It was thus immensely pleasing to wander into the early stages of Lone’s set at the Bleep curated room to hear him playing some Julio Bashmore business from PMR – the young Bristolian may have been absent from the festival but his presence was certainly felt. Lone’s laptop set then went onto showcase the Nottingham based producer’s idiosyncratic take on 90s rave and house with hands-in-the-air inducing results. A hitherto unheard (to our ears anyway) remix/edit of “Pineapple Crush” was one of many high points – with some tweaking and a few more gigs under his belt, Lone will have a formidable live show.

Lone was followed by Detroit’s Kyle Hall, who brought some giddy energy to his set, which included the bumping Roy Ayers sampling “Allright?” from Armand Van Helden’s pre London Fields era and all twelve minutes of Mike Dunn’s excellent “Phreaky MF”. We also learned one new fact for the day: Kyle Hall owns Robin S “Show Me Love” on vinyl. The chance to join the Bloc masses at Laurent Garnier’s festival closing performance was passed up in favour of the unspoken Bloc tradition of seeking out chalet parties. Amidst the hours that followed there was a chance encounter with an Irish Mortal Kombat fan and some plumbers from Devon (it was fancy dress night after all), a rousing happy birthday serenade for Orlando from Lazer Sword, a brief discussion on Judo styles and the peculiar sight of a tiny Polish girl drunkenly trying to engage a mystified Jacques Greene and Jimmy Edgar in fisticuffs. A thoroughly weird but somewhat fitting end to the Bloc weekender. Same again next year, please.

Check out our Best Of Bloc chart over at Juno Download here.