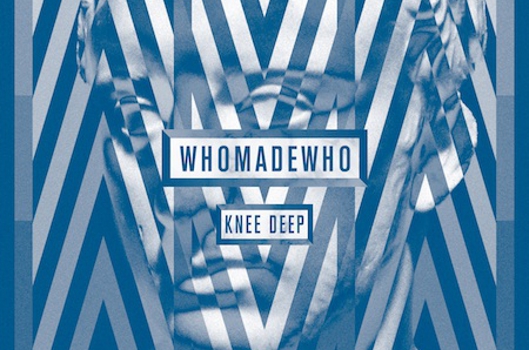 WhoMadeWho have jumped ship from long term imprint Gomma and announced a new mini LP on Kompakt due next month, which showcases a change in direction and serves as a precursor to a full length album due out later this year.

Perennial favourites of the indie disco thanks to the infectious cover versions of Oizo and Benny Benassi that helped establish them, WhoMadeWho have never quite matched the brilliance of their magnificent self titled debut album on subsequent releases – though they did manage to squeeze out a truly sumptuous remix of “Keep Me In My Plane” from DJ Koze.

It’s perhaps for this reason that Jeppe Kjellberg, Tomas Høffding and his more celebrated namesake Barford have chosen to start afresh with Knee Deep on Kompakt, discarding with the no wave hooks and tongue in cheek covers in favour of a sound that’s created from an altogether darker palette.

This mini album will be followed by the trio’s third album later this summer and their first since 2009’s The Plot. Both were reportedly recorded on the isolated grounds of a semi finished hotel in Copenhagen at the end of a gruelling tour last spring.

It all sounds a bit like The Shining which might be the reason for the undertone of menace that runs throughout the eight tracks on Knee Deep, which has been described by the Kompakt press machine as Syd Barrett jamming with Queens Of The Stone Age, with added production by Michael Mayer.

Kompakt will release Knee Deep by WhoMadeWho on vinyl and CD on April 11.