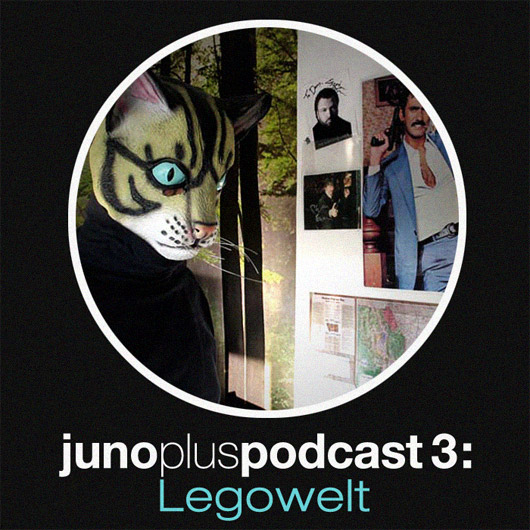 Up next in the Juno Plus podcast series is Legowelt, who took some time out from shopping for second hand knitwear to mix up an hour’s worth of Chicago house and leftfield oddities from Rick Poppa Howard, Ron Trent, Nite Jewel and Stellar OM Source.

We recently caught up with the multi monikered Dutch producer (real name Danny Wolfers) for a chat ahead of his live performance at next week’s Bloc Festival – which you can read in full here – about being a Mike Paradinas lookalike, sweater shopping and obscure 60s girl bands.

For this exclusive mix, he was even kind enough to talk us through the mix track by track, proving himself to be quite the candid commentator:

1. The Lady Blacktronika – If Some Rain: “I recently discovered this artist, its like super insane Detroit house especially her track “Never Everything” but I played this track cause its a good modest intro and I love tracks about the rain.”

2. Xosar – Xosardonyx: “This was made by the mysterious Sheela from San Fransisco. She said the Sardonyx crystal channeled this music into her mind; it’s such a weird, magic, smudgey track with her haunting chanting.”

3. 3 Big Men – The Time Is Now For Action: “A timid early deep house track that was only released on some weird compilation in 1989 called Black Havana, I think.”

4. Nite Jewel – Weak For Me: “I am a huge Nite Jewel fan, her voice and music is so amazing. This track is a bit in the Jamie Principle Chicago style, something really fresh!”

5. Mr.Fingers – Mysteries Of Love: “The weird dub version where he freaks out with the echo delay unit for insane time space modulation.”

6. Rick Poppa Howard – Do You What You Have To Do: “This is Tevo Howard’s dad, so much soul in that voice – lamenting from the deepest basements of his heart. This is music that gives me strength.”

7. Kartei – LichtGarten: “This is not released yet but is coming out on the New York label W.T. Records with a remix from me. This is gonna be huge.”

9. Virgo Four – I Have Always Wanted: “”A huge track from their forthcoming Resurrection album on Rush Hour.”

10. Ron Trent – The Man: “Basically just looping a part of Candido’s “Thousand Finger Man” but it’s so gritty and irresistible.”

12. Entro Senestre – La Caccia: “This is one of the biggest tunes of 2010 on W.T. Records; this guy is from Connecticut or something I believe.”

15. Stellar OM Source – Dynamic Of Here: “Stellar makes really beautiful synthesizer music. I kept that Electrifying Mojo interview going on over it because she is a huge Prince fan.”

16. Geneva Jacuzzi – Love Caboose: “This tune is just so fucking awesome, what the hell is a Love Caboose!? Geneva is genius!”

Juno Plus Podcast 03 – Legowelt by Juno Plus on Mixcloud