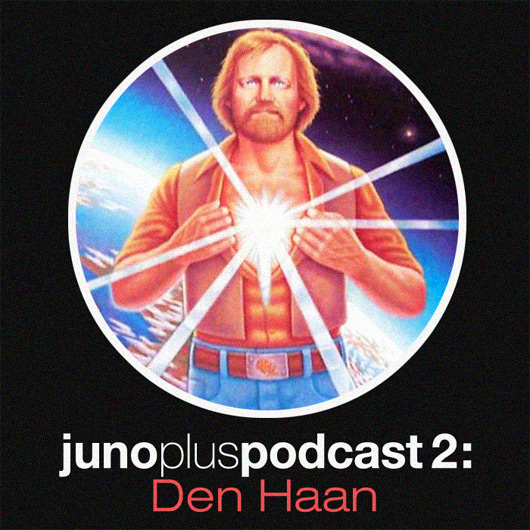 The second Juno Plus podcast comes courtesy of Den Haan, with a seventeen track mix that truly reflects the Glaswegian duo’s musical influences.

Since their debut release “Night Shift” for Dissident Records (RIP) back in 2008, the Den Haan duo of Andrew Gardiner and Matthew Aldworth have been thrilling the record buying public with their HI NRG, highly camp but musically brilliant sound. Formed out of a mutual love of Italo and Hi NRG, Den Haan’s music is one that pays homage to their hereos such as Cowley, Carpenter, Vangelis and Valli. Subsequent output such as the heaving over the top throb of “Release The Beast” for Optimo Music, as well as remixes for the likes of Phenomenal Handclap Band and Hot Chip have seen Den Haan gradually hone this distinctive sound.

Den Haan’s forthcoming album Gods From Outer Space – set for release on their own imprint The Courier of Death on March 7 – executes their trashy genius brilliantly. An insight into what inspired the twelve tracks that make up the album is definitely amidst the selection you see below, as Den Haan told us:

“The reason we chose these records was really just to highlight everything that we love. From Afro-Beat to Italo, Electro, to Disco and Rock plus whatever other genres are thrown in there for good measure. Mainly though, it’s because we love all of these tracks and feel that they need a right good airing.”

Having put all their effort into the album (and this podcast) you could forgive the duo for taking a moment to bask in the critical glory that awaits upon it’s release, but Den Haan clearly have other ideas:

“As for Den Haan, we have new monthly club night starting in Glasgow, called “Luftfunk” which begins February 25. We have also been working on our live show which we look forward to unleashing wherever possible. We’re also excited about getting back in to the studio to work on our new material.”