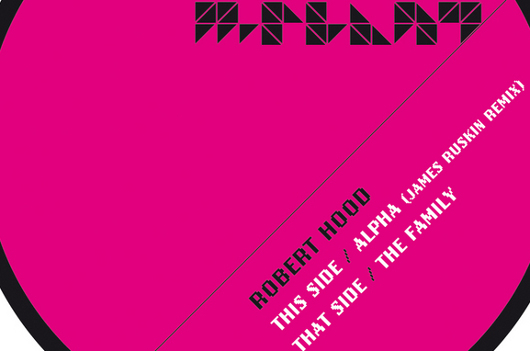 Those of you who love techno the most are in for a Valentines Day treat with the news that M Plant have enlisted the talents of James Ruskin to remix Robert Hood’s “Alpha”.

Hood enjoyed a particularly fruitful 2010, endowing the techno cognoscenti with his album Omega, a superlative conceptual ode to the 1971 film The Omega Man, revealing his inner disco with the Floor Plan rarities on Rush Hour and M Plant and even remixing Boys Noize.

“Alpha” was one of the standout tracks on the aforementioned album, and in the hands of Blueprint boss Ruskin it gets twisted into a suitably heads down percussive thumper whilst retaining the essence of Hood’s original.  Extra sweetness is provided in the shape of  “The Family”, a new production from Hood which finds the Detroit producer in vintage form, formed of an unrelenting rhythmic thrust driven by a massive throbbing bassline.

M Plant will release Alpha (James Ruskin Remix) / The Family on vinyl and digital formats on February 14, and you can get a wee taste of what to expect from the below player.