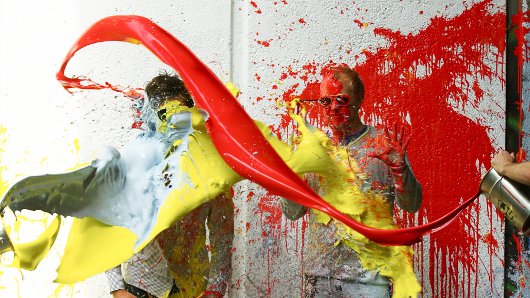 DJ/production duo Radioclit will release a 14 track compilation showcasing the African electronic music promoted via their Secousse club nights in London and Paris.

Radioclit, comprised of Johan Karlberg and Etienne Tron, have been pushing their love for ghetto electro for some time now, hosting regular parties on both sides of the channel.

Their early productions were embraced by the electro scene circa 2006-2007 (the Switch remix of “Divine Gosa” was particularly memorable – Sidney Samson certainly seemed to take a liking to it), before they continued to explore their love for African ghetto music.

They also formed the live outfit The Very Best, alongside Malawian-born singer Esau Mwamwaya (who Etienne serendipitously met in an East London second hand store). Their self titled album released in late 2008 covered hits from M.I.A and Architecture In Helskinki amongst others.

They regularly attracted interesting live acts to the early Secousse nights at the Notting Hill Arts Club in West London, as well as educating the crowd with a range of tribal African beats through their own DJ sets.

Crammed Discs will release the compilation, entitled Radioclit Present: The Sound of Club Secousse, on October 11, 2010. It contains music from the Ivory Coast, Angola, Sierra Leone and Congo among others. In the meantime you can have a sneak peak at the tracks via the Juno Download player below.