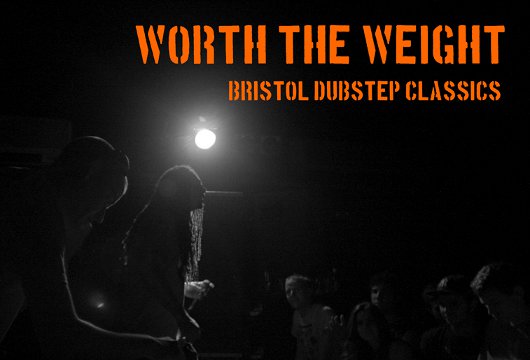 The ‘Bristol Sound’ has become an increasingly influential part of the dubstep landscape in recent times, with the city itself a hotbed for bass music with a number of labels (Punch Drunk, Tectonic, Apple Pips, Kapsize, Ear Wax, Caravan and Sub Text), as well as studio and production company Multiverse Music all based in the West Country.

Worth the Weight – Bristol Dubstep Classics features Bristol’s finest across two CDs, with Pinch, Appleblim, Joker, Guido and of course Peverelist all appearing on a frankly impressive tracklist.

The CD version includes a photo booklet and sleeve notes from blogger, Gutterbreakz, some (or perhaps all) of which were included in the press release. You can read them below.

“(“I knew straight away that this was a sound that would fit perfectly in Bristol – there is a lot of tension in the music that carries a satisfactory darkness with it, but it’s also lazy music. You don’t have to dance hard to move with it – it was born with a reefer in its gob!”)

“So said Pinch when I interviewed him in February 2005. Having witnessed the early DMZ and FWD>> raves that spawned this new sound we now refer to as dubstep, and having gradually begun integrating it into the fabric of Bristol’s existing club scene, this young DJ’s instincts were proving correct. The following month I attended one of his Context nights – a dubsession by Loefah and Skream, on one of their earliest forays outside the Capital – and experienced for myself the sheer physical impact of dubstep at soundsystem volume. But even that was just a hint of what was to come. In April, Subloaded II sent a subsonic shockwave through the city, as Bristol shuddered under the weight of DMZ’s bass meditations. Those who survived the onslaught were changed forever, and Bristol’s destiny as dubstep’s second city became assured.

“May 2005 saw the debut release on Pinch’s Tectonic imprint, which was the first of many new dubstep labels to emerge from the city. Being so much smaller than London, Bristol’s new generation of bedroom DJs and producers mingled freely in a close-knit community centred around the Rooted Records shop and the new club spaces (Dubloaded, Subloaded, Ruffnek Diskotek, Noir, HENCH) which sprang-up over the following months to cater for this rapidly expanding scene. Beats and ideas were eagerly exchanged on freshly-burned cd-rs in a period of unprecedented communal activity and cooperation, which would ultimately draw in and re-energise many of the city’s older generation of bass-explorers. Indeed, Bristol’s historical association with bass-orientated music was a crucial factor in the formation of a distinct and cohesive sound that triggered a feedback-loop of influence back to both London and the world beyond.

“Almost inevitably, the Bristol micro-scene outgrew it’s grassroots, as producer-DJs like Headhunter, Appleblim, Joker, RSD, Pinch and Peverelist soon found themselves playing venues all over the planet. Once again, the ‘Bristol Sound’ had become an international phenomenon. Yet even today the core community still comes together for the regular mid-week Dubloaded sessions, which remain a testament to this city’s unshakable sense of strength and solidarity, as SGT. Pokes (the Honorary Bristolian who led the first charge at Subloaded all those years ago) calls the monthly congregation to prayer.”

The compilation will be released on November 11 via Punch Drunk.