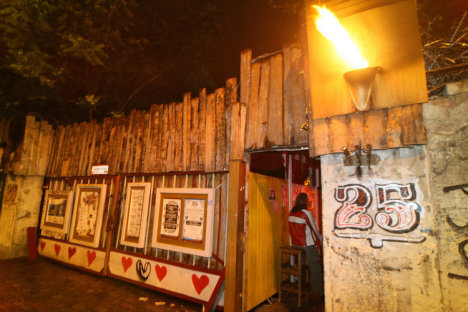 Famed Berlin venue Bar 25 has seemingly closed its doors for the last time, with the venue to be razed to make way for a long touted development, German newspaper reports suggest.

It looks to be the final chapter in a long-running saga over the future of the venue. The contentious Mediapspree project aims to build a lucrative media hub along the stretch of the river Spree that the bar currently occupies.

“Bar25 has to leave the property this year,” said Thomas Klöckner, a spokesman for the state-owned waste management firm BSR, which owns the land in question. “That’s not talk, that’s what we agreed on, from both sides.”

Music blogger Jonty Skrufff posted a link to the article, published on German based English language site The Local over the weekend. The article went on to state that the club’s owners are now looking to move to a new location, and were unhappy about the lack of support from city officials who are usually keen to promote Berlin’s legendary nightlife.

“Berlin’s political representatives seemed unconcerned with sustaining the 200 seasonal jobs that Bar 25 represents,” they said recently in a statement. “When it came time to provide concrete assistance, their promises, from the mayor on down, proved empty.”

Bar 25 has earned its place in Berlin clubbing folklore with a series of legendary summer parties dating back to 2004, which often lasted well past the weekend. The idyllic surroundings of the venue and laid back nature of the Bar 25 management saw it become a haven for all kinds of weird and wonderful Berlin night owls.

The planned closure has been met with fierce criticism from Bar 25 supporters. One particularly withering reader comment suggested the developer’s plans to tap in to the coolness of the area was inherently flawed: “It’s the equivalent of Greenpeace cutting down a square mile of rainforest to open a centre to campaign against deforestation.”