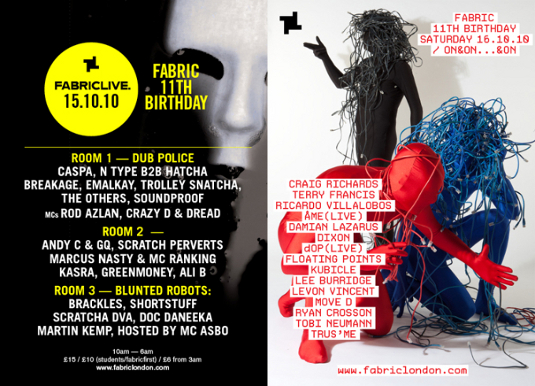 Fabric will celebrate its 11th birthday with a couple of monster parties in October, with R. Villalobos, Caspa, D. Lazarus and Dixon among the names on the teamsheet.

It’s been an eventful 12 months for the club, which went into administration earlier this year following the demise of sister club matter.

But it’s all smiles now, with the club’s financial future seemingly assured, the usual array of great lineups and some pretty damn fine Fabric compilations from the likes of Surgeon and Drop The Lime.

The birthday weekend, which is scheduled for October 15-17, kicks off with a dubstep, breakbeat and drum and bass friendly Friday bash, with Caspa, Andy C, Scratch Perverts and Breakage among those keeping things nice and noisy.

Saturday October 16 sees the commencement of 48 hours of utter carnage, with the latest in a series of seriously solid On & On parties. Levon Vincent, Floating Points, Trus’me, Riccy Villalobos and Dixon are among the names set to play. If you think Saturday night – Monday morning sounds like a serious party, we’ll leave you with a quote from Frankie Knuckles, who was referring to a particualry epic visit to the infamous Continental Baths nightspot in 1970s New York.

“I ended up staying for what felt like three or four days… it was only when I went outside that I realised I’d been there for two weeks.”

Full line-up and ticket information on the parties can be found below. Tickets can be bought here.