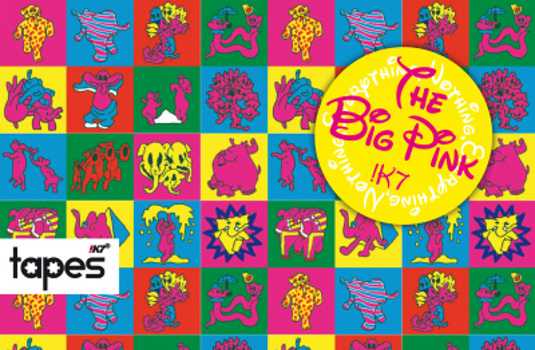 !K7 have called on Milo Cordell of “strident electro rock duo” The Big Pink to mix the second installment of their rather infrequent Tapes mix series, which is set for release on October 18.

The Rapture were responsible for the inaugural Tapes selection back in the Autumn of 2008, a pretty decent excursion through party music that veers from Ghostface Killah to Richie Havens via Armand Van Helden and Syclops (fyi The Rapture: if you’re reading this, new music soon please?)

Given that !K7’s concept behind the tape series is a glorified mixtape where the chosen artist is entrusted with everything from finessing the tracklist to providing the artwork  (with Cordell opting for a theme of pink pachyderms)  it’s understandable why the Berlin imprint has taken two years to identify the artist for the second volume.

The Big Pink were amongst the most hyped bands to emerge last year, with their debut album A Brief History Of Love justifying the blog and press hoopla with impressive sales. Amusingly, the bands  reputation for taking no prisoners sonically extended to the physcial realm when singer Robbie Furze sparked a goading gig attendee in Atlanta earlier this year.

For his Tapes mix, Milo has handpicked a selection of music that strays between the more avant garde end of the dubstep spectrum (Joker and Balam Acab) and Juno Plus favourites such as Gang Gang Dance, Actress and Salem as well as a healthy dose  of what fans of pigeonholing and sub genres puzzlingly refer to as Witch House.

!K7 release Tapes on October 18, go to the offical release website for (not much more) information