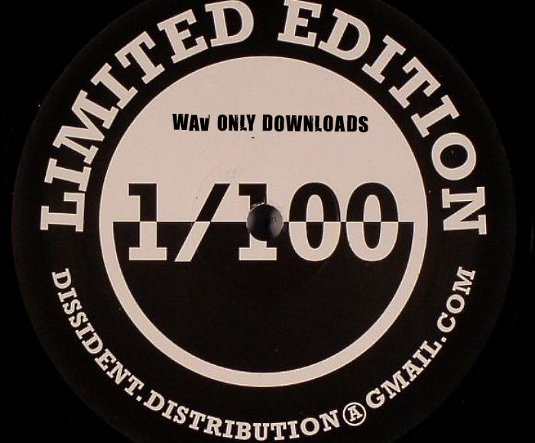 Andy Blake’s revered (and now no longer active) Dissident imprint is going digital, with the entire back catalogue going up on Juno Download in the coming months.

And in classic Blake style, there is an interesting twist: the music will only be available in Wav format and limited to 100 downloads per release, exclusively through Juno. UPDATE: The first batch of releases is now available – check them out here.

The news is particular exciting, especially for those who missed out on the limited one-sided 12” pressings the first time round. The Dissident catalogue of around 60 12″s – amassed in a two year period between 2007 and 2009 – contains an eclectic mixture that touches on house, techno, EBM, electronic disco and beyond, with the likes of Mark Broom, Gatto Fritto, Photonz, Naum Gabo and Blake himself all contributing.

Since Blake announced that Dissident was no more late last year, he has started up a new vinyl-only Cave Paintings imprint, and has also been hard at work in the studio – we are particularly enamoured with his upcoming remix of the Detachments, which was recorded in one take and clocks in at a mere 18 minutes.

Juno Plus spoke to Blake about his move into the digital realm.

Why the move to digital?

A number of the artists have expressed an interest in digital for a while now and lots of my friends and people I meet on my travels have always asked me if/when digital would happen. I’m not sure why but something finally clicked into place for me in Berlin a few weeks ago and I decided to give it a go and see what happens. The main thing for me is to see if we can get the artists more exposure and help them with their careers.

Why the focus on wavs and limited downloads?

The wav only thing is simply because I think mp3s sound bad on a big soundsystem. And I guess the limited edition idea is me gently easing myself into the world of the non-physical medium by making the availability of the releases finite, like they would be with a vinyl release. I’m very pleased to be doing this exclusively with Juno, we’ve worked together since the very beginning of the label so it’s the perfect situation to be going into this new territory for me and the label together. This is very much a work in progress and I’ve got a huge amount to learn about the world of digital music sales, so just like when I started the label 3 years ago it’s very much a case of making it up as we go along.