Werk Discs artist Lone (aka Nottingham producer Matt Cutler) has launched his own imprint and will kick things off a two track 12” of his own material.

The release, titled “Pineapple Crush/Angel Brain”, represents something of a departure from his previous hip-hop infused albums Ecstacy & Friends and Lemurain. “Pineapple Crush” is pure four-to-the-floor 90s style house, replete with rave keys, shuffling snares and heavy doses of 808, while the flip side “Angel Brain” keeps the tempo hovering around 130BPM with a particularly memorable, glowstick-friendly synth breakdown in the mid section.

“Pineapple Crush/Angel Brain” will be released on Magic Wire on August 16. Check out the artwork below. 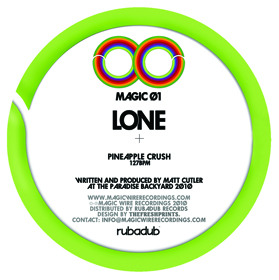