Two of the driving forces behind the esteemed Turbo imprint (fronted by the Canadian crooner Tiga), Mike Mind and Thomas Von Party know their way around a dancefloor. Both are DJs and producers du jour, and quite good friends to boot – so we asked Mike to interview Thomas about his role as the label manager of Turbo, the changing world of A&R and why DJing after Proxy sucks.

Mike Mind: As a DJ, you’re quite versatile. You’re a great opener, but also know how to bang it out as a headliner, or drive the momentum of an afterhours set. As Turbo label manager, there’s also the added expectation that if you get booked, you’ll play a lot of Turbo stuff, both new and unreleased. Do you ever feel that this makes it difficult to carve out your own sound as a DJ?

Thomas Von Party: For better or worse, I’ve never been concerned with having my own sound as a DJ. I enjoy the freedom of playing a wide variety of music and wouldn’t want to become too neatly identified with a given sound. I think that’s made easier by the fact that I’m not a producer who builds his set around the aesthetic of his own music.

I’m proud of that quality, actually, of being sort of amorphous as a DJ, because that’s what I think DJing is really all about… playing the right music at the right moment. I think there’s plenty of room to assert your personality without being confined to say, ‘deep, funky, tribal house.’ I’m remembering that bit in ‘Ciao Means Forever’ where Tiga talks about being a chameleon… Fortunately if I’m booked to headline a night with the expectation that I’ll play all the new Turbo stuff, I’m usually happy to indulge and bang it out, but sometimes the ‘big & loud’ thing can get oppressive.

TVP: “For artists and labels, it sucks that it’s nearly impossible to make a great living selling music without touring, but the flip-side is that there’s a pretty level playing field out there in which the only consistently effective strategy is quality”

MM: How does DJing frequently with the same people influence the way you perform? We’ve played together on countless occasions and I know you play with your brother and Proxy on a regular basis. Do you find choosing music for these shows more difficult or is there a kind of comfort zone that’s established over the years that makes it easier? Do you get competitive when you play with someone like Tiga?

TVP: Absolutely, 100%, I find playing with Tiga the hardest. He’s the closest to me, musically, of anyone I play with, and we usually know a lot of the same records. It’s always much more challenging when the five or 10 new records that you’re most excited about playing are sort of spoken for. That’s not to say that Tiga forces me not to play certain things, it’s just sort of a silent understanding…and honestly that can sometimes lead to some not-so-great sets. Some of my lamest sets ever were opening for Tiga. I guess it can sometimes make me overthink things. But I think I’ve gotten better about that, in general. As far as being competitive, that’s not how I think of it… but both he and I are tough critics, most of all with ourselves. Opening for Proxy is great. Playing after Proxy is tough. Before him, you can play anything. If you go hard, it’s ok – he is always harder. If you branch out and play deeper, it makes for a nice contrast. Playing after Proxy sucks!

MM: When we both started getting into DJing in the 90s, I got the feeling that the pressure for DJs to perform came mostly from other DJs. The bar was set pretty high and overall – I’d even suggest that you had to be a better DJ then than you do now in order to have a comparable career. Nowadays, it seems that the pressure to perform comes mostly from the audience instead. Promoters book artists based on their box office pull, which is ultimately a reflection of what the mass public wants. How do you think it’s affected the quality of the parties and the quality of the music? Do you think the audience really knows what’s best for them?

TVP: I definitely agree that there used to be more of a culture of inter-DJ dialog, usually rooted in record stores, which extended to the DJ booth. Of course now you still have in the form of online sites like RA or the Erol forum, but there are some marked differences. There was real value placed on actually owning records, and you can’t underestimate the amount of mystique that brought to DJs. Now that that’s essentially gone, the prevailing atmosphere among DJs is of shared knowledge, that’s why I think the emphasis, and the pressure, is actually more on performance now… and I don’t think that’s strictly from the audience, it’s from all sides, including fellow DJs and promoters. The shift from the essentially faceless selector and technician DJ into the rock-star crowdsurfing superstars we now have… it’s a pretty direct result of the scene growing and getting more commercial. On that note, I think it’s funny how seldom it’s REALLY pulled off. I mean, if you actually compare DJs to real rockstars…it’s pretty sad how we stand up as performers! (YouTube link to Tiesto spreading his wings, anyone?)

As for the audience knowing what’s best for them…I read an interview with Joakim once, and I loved what he said. It was something like: “The point is not to give the audience what they think they want, but rather, what they need.” The mark of a great DJ is one who can tap into the energy of a crowd without spoon-feeding them what they’re used to.

MM: I think you understand as well as anyone that the old paradigm for marketing / sales in the music industry is over, that we’re currently witnessing a time when promoting and selling music presents a million options, none of which are ideal. Does anything work well right now? For example, on a day-to-day basis, we deal with three Turbo websites, Twitter, Facebook, Soundcloud, Myspace, forums, YouTube, Blogs, and digital music stores. It seems that every day there’s some new platform on which labels and artists need to establish their presence. Do you view any particular strategy as a solution that might eventually resolve this mess?

TVP-If there’s one thing I’m not sentimental about in this business it’s the “good old days” of promoting and selling records, mostly because I wasn’t in the business at the time. I think a lot of things in music culture have been lost and a lot has been gained.

For artists and labels, it sucks that it’s nearly impossible to make a great living selling music without touring, but the flip-side is that there’s a pretty level playing field out there in which the only consistently effective strategy is quality.

Running a label can certainly be very frustrating. The decentralized, guerrilla tactics needed for an artist to blow up are diametrically opposed to the old model of what a record label is and how it works. I don’t think there’s any easy solution, but I think there’s a general shift towards artists becoming their own companies, their managers taking on more and more, and the release of music is increasingly being seen as an expense rather than a source of income.

MM: What goes through your head when you pass on a record you know will sell, but which you don’t think is right for Turbo? Do you ever feel that there’s a conflict of interest between supporting the music you believe in and the music you think would benefit the label? Are there ever times when the manager and the A&R Man in you don’t agree on the best way to promote a record or sign an artist? In other words, do you ever disagree with yourself?

TVP: I know what you mean, but I’ve never really disagreed with myself or regretted an A&R decision. There was one case where we rejected a remix I would have put out, not because I liked it, but because I thought it would do well. That track came out in the end and was a massive hit. Do I regret our decision? No. Am I asking myself questions? Yes. 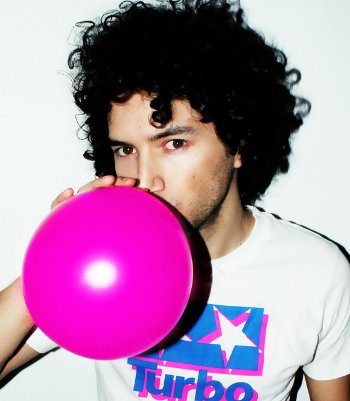 MM: Tiga once joked that Turbo would never sign a dwarf or a woman. Has it ever occurred to you that’s it’s a bit absurd that in over 100 releases Turbo has never put out a record or remix by a woman?

TVP: No, it just hasn’t happened yet. Although to be honest, I can’t think of a ton of female producers I’d want to have on Turbo…I’d be very happy to put out a record by Magda or Chloe, both of whom are outstanding DJs as well.

MM: A&R your fantasy record. Be specific. Don’t just say, “I wish A1 were a new Aphex record.” Tell me what it would sound like, who you’d want to remix it, your dream packaging, video director, everything…

TVP: I like this question. Sorry, but it does involve Aphex Twin. He’s all-time favorite producer by miles. It’d have to be his best. Something rave, mega acid, touch of breaks, and with a long, epic ambient finish. I wouldn’t want it to be remixed. One-sided laserdisc-only release limited to 100 copies with a black matte sleeve and a die-cut ‘A’ showing the gold laserdisc underneath. Video would be a 3D holographic laser-rendered psychedelic animation. Avatar meets Chris Cunningham / Norman McLaren / Ryan Larkin etc.

TVP:  “A one-sided laserdisc-only release limited to 100 copies with a black matte sleeve and a die-cut ‘A’ showing the gold laserdisc underneath…”

MM: You throw the word ‘vibe’ around like you know what you’re talking about. Are you content with the vibes you know, or is there some kind of ultimate ‘vibe’ you’re striving to experience or share? Tell us Professor… how good do vibes get? What’s the worst vibe? The craziest?

TVP: I’m into psychedelics and altered states of consciousness. When I think back on the vibes I’ve seen, I feel like that replicant in Blade Runner giving the Tears in Rain speech…My ultimate is flat-out golden chakra superhighway spirit realm. Worst vibe? I’d imagine that out there there’s someone who is like the dark opposite of the motivational speaker who lost all his limbs but still gets up every day and is thankful and makes people smile and loves life. Like someone who has no limbs, bad breath, and a bad attitude. That’s pretty bad… Are you actually asking me what the ‘craziest vibe’ I can think of is?

MM: OK. Last question. Where do you see yourself in five years?

TVP: DJing IN nature, FOR nature. Writing a book about the religion I invented, Share-atarianism. Being a stud on Second Life. Living in vibe-country.