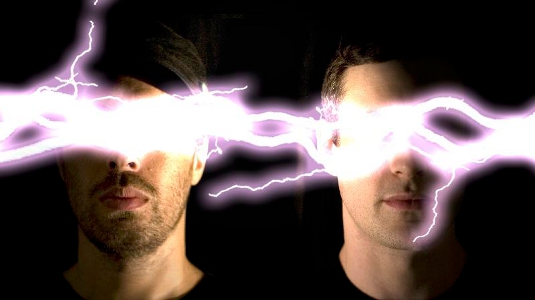 We’d almost forgotten about Retro/Grade, the italo disco revival project from  Serge Santiago and Tom Neville so it’s pretty darn good news to hear that the duo have signed to the newly reborn Deconstruction Records and will release Motion, their debut album next year.

More excitingly it means the general music buying public will be able to fully appreciate the raw beauty of Retro/Grade’s ‘Moda’ which is set for a full release alongside the equally brilliant ‘Pulsar’ in August.

Despite the likes of Erol Alkan and Simian Mobile Disco teasing the ears of club goers for absolutely ages, ‘Moda’ was released last summer in strictly limited vinyl quantities and sold out in less than a week, with the stating no digital release for ‘Moda’ would happen until they had a album deal.

Deconstruction boss and all round UK music legend Mike Pickering was obviously quite happy to have secured an album from Santiago and Neville stating that “Retro/Grade are probably the most exciting emerging underground artist we have signed to Deconstruction.  Really cool and credible Italo House which keeps Deconstruction’s foot in the warehouse, but also has massive potential to crossover next Summer.  We couldn’t be more excited to have them on our line-up.”

The duo are also set to unleash a Retro Grade live show to coincide with the launch of  ‘Moda/Pulsar’, having fine tuned the programming at select gigs such as Disco Bloodbath and Bugged Out over the past year.

Explaining why they have been out of the spotlight for a while, Serge Santiago said it has taken time to “make everything perfect; make it sound vintage but also timeless and fresh. We’ve taken influences from everywhere – films, artists, computer games – using films like Blade Runner, Tron, even Rocky to help guild us. Writing music to scores is a great way to get your mind focused on different points of the music and how it should all work… Disco legends like Patrick Cowley, Gino Soccio, Goblin and Larry Levan help us keep the energy level up in what we write and keeps it dancefloor without conforming to today’s rules in how you ‘should’ produce, letting us be much looser with the notes that are being played.”

‘Moda/Pulsar’ are out in August with the album Motion to follow sometime in 2011.