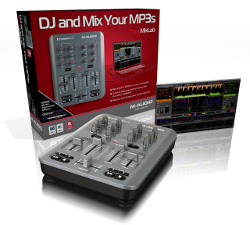 For only £69.99 you really can’t get much better in terms of value and features than the M-Audio Torq Mixlab Digital DJ System. Aimed at budding DJs, M-Audio says on its website that the Torq MixLab is “powerful enough to take you from small parties all the way to stadium gigs”. While I agree that the package offers everything you need to start yourself off as a digital DJ, the Torq Mixlab seems more at home ‘at home’ than in a stadium.

The contents of the box includes M-Audio X-Session Pro MIDI control surface, 2 x Torq Mixlab Installation CD’s (one for Windows XP/Mac OS X, one for Windows Vista), which include Torq LE software (a stripped-down version of Torq), all the necessary documentation and Torq music collection; a ‘getting started’ printed manual, a USB cable for connecting the X-session to the computer & Y-adapter cable for connecting to your computers soundcard to split the audio signal for cueing.

Installing the software was simple and being ‘plug & play’ meant the X-Session was recognized by the computer immediately after plugging in and required no drivers to get going. The X-Session is also bus powered so an adaptor isn’t required to power the unit. On opening Torq LE for the first time I was pleased to see that all the controls on the X-Session had been pre-mapped to the relevant controls on screen so I was up & running in no time. Torq LE recognizes your iTunes library so I could navigate to my iTunes folder easily & drag an MP3 onto the deck. Upon loading, tracks are automatically scanned by Torq for waveform and BPM info, which takes about 10 seconds but may vary depending on the speed of your computer.

Noticing that Torq features a ‘sync’ mode, I was keen to test this out and see how accurate it was. Clicking the ‘Sync’ arrow on either deck will automatically synchronise the BPM of that deck to the opposite deck, which should keep the two decks in-time with each other.

Initially, mixing dubstep proved difficulty for the BPM Sync to deal with and kept throwing the mix out of time. This might have been because many dubstep tracks beats have a swing feel to them which the software couldn’t cope with. Switching to house and techno yielded far better results but occasionally threw a spanner in the works by not locking tightly to the tracks I was mixing. These mixed results lead me to sacking this function off in favour of using my own judgement and mixing the old-fashioned way.

The other functions of the software worked fine and without any more glaring issues concerning usability, I was able to mix quite happily without any gripes. The software is fairly well-laid out and as there aren’t too many controls overcrowding the on-screen display. Most people, whether beginner or professional, should have no trouble figuring out how it all works.

In terms of build quality of the X-Session Pro, it’s not as durable as the popular ‘Faderfox Micromodul DX2 DJ MIDI Controller’ or the ‘Allen & Heath XONE:1D Professional DJ MIDI Controller’, but then again these controllers cost more than double and don’t come bundled with any software. The eight rubber buttons on the X-session feel solid and have a nice click to them when pressed. The 12 plastic rotary knobs are fairly solid, as are the five faders.

All-in-all, I can recommend M-Audio’s Torq Mixlab to someone starting out, who already owns a computer and wants a reasonably priced all-in-one solution to get going with. It’s also a good choice for someone who DJs at parties and doesn’t want to fork out for something with a professional price tag.

It’s worth bearing in mind that as the X-Session Pro works as a standard USB MIDI controller, it can be easily configured to work with Ableton Live, Traktor Scratch, Cubase, Logic, or any other software that works with a MIDI controller, so in many ways, this is for everyone!