Dapper, bookish, a connoisseur of everything from beard-stroking techno to punk, soul and rockabilly: Andrew Weatherall really needs no introduction. After his production of Primal Scream’s ‘Screamadelica’ set the blueprint for what became know as indie-dance, he went on to pioneer the UK’s acid house scene and make seminal electronic music in the 90s with Sabres Of Paradise and Two Lone Swordsmen.

For such a prolific figure it’s something of an anomaly that it has taken until 2009 for a solo album to emerge (A Pox on The Pioneers, Rotters Golf Club), although, in typical Weatherall fashion, it came amidst a frenzy of other projects and the revelation that he already has a second album all but finished. “Wevvers” took some time out to chat to JunoPlus scribe Aaron Coultate about polar explorers, Edwardian fashion and the similarities between rockabilly and techno.

Where did you get your inspiration for the album’s title, A Pox on the Pioneers?

It’s about living vicariously through the exploits of others. We love artists who suffer for their work, because it makes it more real for us. We feel their pain, because their art comes as a price. It got to the stage where I had read everything there was to read about dead rock stars, so I moved onto doomed polar explorers. I swapped guitars for ski poles, I guess. It’s just an area that fascinates me, and I can’t help but wonder if they think, at the end of the day, they’d rather be a live zero than a dead hero, you know – was it all worth it?

Are the lyrics personal to you?

They are very personal. It was an emotional outpouring, but everything on the album is told through a story. When you start telling personal things about girls, or whatever is going on in your own life, it gets clumsy. If you’re going to be self pitying, at least hide it in stories about doomed explorers. I’ve learned from the great ballad writers, guys like Johnny Cash, Nick Cave and Willie Nelson, that you hide those personal heartaches in story form. It took me a long time to realise that, I was a bit self-obsessed for a while there (laughs).

“If you’re going to be self-pitying, at least hide it in stories about doomed explorers”

Have you got plans for another solo album?

Yeah, I’ve already got my second album written, there’s 10 tracks ready to go. It’s funny, there are 4-5 songs we found that I don’t even remember making. It’s that prolific in the studio, we’ll put together a rhythm section or a chord progression and just leave it on a hard drive somewhere and forget about it. Actually, a good example of that is “Built Back Higher” (from A Pox on The Pioneers), I had totally forgotten about that until a friend came over and started whistling the tune, 18 months after I had made it. I was like, yeah I remember that, where has it gone? Luckily we found it. I figured if he still had the melody in his head after 18 months it was worth putting on the album!

You’ve also got the second volume of the Andrew Weatherall Vs The Boardroom out. How did that come about?

It was a very natural process. There are three or four sets of people making music here (at Weatherall’s studio in Camden) more or less constantly. It’s a continual production line. People might think that doesn’t sound very emotional, too much like a factory, but I have found factories to be very emotional places. So we have tapped into that production line ethos. The studio is a factory, there are people here from 11am to 4am the following morning, and if we are not making music, we are discussing music, literature or art. On the Boardroom album there is some cosmic disco, post-punk, minimal, but they are not token inclusions, there’s more to it than that. They all infect each other, and, although different people have made the songs, there’s a common thread running through them. I think it is a good reflection on all the people that work at the studio and a snapshot of the European club scene at the moment.

Where do you think the club scene is most exciting these days?

About 70 per cent of the shows I play are outside the UK, so I’m not qualified to really talk about what’s happening in my own country anymore. But I think Berlin now, Barcelona 10 years ago, they are cities that draw people from around the world. I played at Watergate (in Berlin) recently, it is a young crowd, it’s a fashionable crowd, but they are into their music. They don’t just stand around looking at each others trousers: the music is more important than clothes and haircuts.

How different is your approach to DJing now to when you first started out 20 years ago?

I didn’t see myself as a DJ at first, just a guy who had a good record collection. I’d come on a 5 or 6am, and play experimental electronica, dub, post-punk. I wouldn’t even mix. I just played tracks that I liked. Now I spend a lot of time constructing a set, figuring out what basic rhythm tracks work with a certain accapella. I think I’m getting better at my job, although when I was younger I had the confidence of ignorance! I put in a lot of preparation for my sets, but if you can’t figure out a crowd after 20 years, you’re not much good are you?

“I didn’t see myself as a DJ at first, just a guy who had a good record collection”

Do you still see DJing as your bread and butter?

Yes, but it’s embarrassing when people ask what I do, and I say “I’m a DJ”. You feel reticent, especially once you get past 40. There are so many incredibly naff connotations with being a DJ, and I am embarrassed by certain DJs and how they behave. But if I had to put down my job on my passport, I would still write “DJ”.

How does the current club scene compare to when you first started out?

A lot of people who were around 20 years ago talk about the good old days, but it’s exactly the same today. If you ask a 20-year-old boy or girl at Watergate if they think the current music scene is exciting, they will tell you they are having the time of their life. I haven’t got rose tinted specs on, I don’t hanker for days gone by. I think it’s wrong for someone like me to tell younger people that things used to be better.

Your most recent production work was with Bristol duo Fuck Buttons. Did you enjoy that?

Enjoy? I’m not sure that’s the right word (laughs). It was very intense. I haven’t actually listened to the record since it came out, although I’ve had a few phone calls telling me it was good. To be honest, I haven’t felt that drained for a long time. A few years back I used to work on building sites and do a lot of labour work, and they way I felt after a day in the studio was the same as if I’d done a hard days graft. It was physically and mentally draining, but after a week’s work, there was a real sense of achievement. 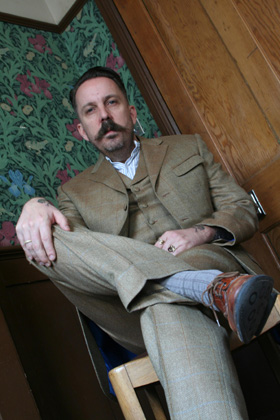 You’ve been doing regular radio shows for BBC Radio 6, how have you adjusted to life as a radio jock?

I love it because I can inflict my music tastes on an entire nation! No, I try not to be too self-indulgent. Granted, the music is weird, but it could be a lot weirder. I come on after Craig Charles, who plays a lot of jazz and funk, so I’ll start with some of that, but a bit more experimental. Then I’ll play some rockabilly, a bit of gypsy music, some Eastern European stuff and finish off with a 30 minute mix of more dance floor tunes. But it’s not eclectic for eclectic’s sake, I try to keep a thread going, because in my back to front world there is a link between rockabilly and techno.

Well rockabilly is a very ‘out of space’ kind of sound. I could take up an entire radio show playing 50s rock that is all about Martians and space, they had a fascination with it, just like we do now.  If you turned rockabilly on in a car radio in 1950, it would sound like it was coming from out of space, y’know, very futuristic. Techno is like that today, it’s all about spacey sounds, playing with reverbs and delays. That’s my theory anyway and I’m sticking to it (laughs).

Let’s talk facial hair. That’s quite a moustache you’re sporting these days. It certainly fits in with your overall look…

I’ve always had a thing for retro fashion. At the moment it’s turn of the century Edwardian clothes. It’s a favourite era of mine, I like a lot of Edwardian art and literature. I’m not really one for today’s fashion, you wouldn’t catch me in trainers. If you have an older guy trying to wear today’s fashion it looks foolish, although to be fair I do look like I’ve stepped out from a weird time portal from 1905 (laughs). Pop music and clothes have always gone hand in hand. Even back in the early days if I dressed down I’d still dress expensive. A psychologist would probably tell me it stems from rampant insecurity.

You started out as a music journalist, do you still write much?

I pen the odd column for an art fanzine, just some short stories and the odd review.  I’m writing continuously, some times to it’s for a song, or a short story. I take a notebook with me wherever I go, so if I read a good bit in a book or a poem or hear a line in an obscure film, I’ll bastardise it. I’ve always been fascinated by the English language.

The Boy’s Own fanzines are getting released as an official compilation. Do you think they are still relevant today?

I think they still have a rugged charm. Although they are 20 years old, so it’s a little bit embarrassing. These were the days before Photoshop, so we’d actually sit there and cut things out and glue them in. Whether that will actually mean anything to a generation with desktop publishing I don’t know. Still, I am a little bit proud of it, even though it’s mostly naïve left wing politics, bad poetry, a bit of football and fashion. We never thought it would transform into what it did. Now it’s part of the bigger picture. Hopefully people will look at it and think, “If these guys could do it so can we”. It’s that punk rock ethic.

Do you think we could be due for an acid house revival?

Acid house never left us! That’s the thing with revivals. The problem with the current 80s revival is that people take the obvious, naff bits of that era to use. I’d actually be happy if they took the darker acid house stuff from the late 80s, although I’d like them to go the whole way and use the proper kit. If you’re going to do retro, do it properly, not software retro.

You can buy A Pox On The Pioneers – and much more Andrew Weatherall-related paraphernalia – from Juno Records and Juno Download. You can also read our review of the second Andrew Weatherall vs The Boardroom compilation here.