In the Guest Blog section, we’ll be regularly roping in a globe-trotting DJ to share the literary burden at Juno Plus. They’ll bring you a weekly first hand account of life on the road; the parties, the highs, the lows and everything in between. First up we have techno starlet Joel Boychuk, aka Hobo, who’s signed to Richie Hawtin’s revered Minus label. The young Canadian will be taking us on his European tour alongside stable buddy Magda for the next few weeks. In his first post Hobo recounts gigs in Spain and Italy, and discovers one of life’s most valuble party lessons.

As I head out on the road for a month whose weekends will be spent in hotel rooms and clubs, at small parties and big festivals, I ask myself: what do I want to take away from an opportunity like this?  Pictures last a long time, but they don’t necessarily help you moving forward.  Being on the road isn’t just about the parties, the money, screaming fans, getting paid to see the world, racking up air miles, enjoying authentic cuisine, having your name in lights, making friends all over the planet, seeing really hot dancers, and cranking tunes out to thousands of dancing people.  No, somehow that’s just not enough.  I want more.  If this is my life, then I want to discover some of it’s lessons that will serve me long after the faders come down.  And with this in mind, I head out to discover my own rulez of the road.

It started at 7:00 AM in Berlin.  I was only able to get three hours of sleep because I was up late ripping the parts of a new remix to add to my live set.  I also had to take into account that I was flying out of Berlin’s Schönefeld Airport which takes about thirty minutes by taxi or an hour by two trains and a bus.  I chose the latter because compared to taxi, there’s about a forty-seven euro difference.  I quickly packed and was out the door early.  I missed a flight to Sonar in 2007 from this airport and I’ve always been cautiously early to arrive ever since.  On the train, I was listening to a mother explain to her son why they can’t have family get togethers in Berlin because there are so many things to do here that instead of gathering together, everyone will go out to clubs or concerts and never see any of the people they came to see.  While Berlin does have a ton of things to do, I wanted to interject and tell her that Berlin may also be the best place to let time slow down to enjoy the company of others.  Alas, I didn’t bother, I had a plane to catch.

“At this point, I wanted nothing more than to relax, so I went to the pub for some cider.  I probably should have eaten something too”

At the airport, check in was fast and easy, but security was not.  I had to go into secondary security so they could test my gear for explosive substances.  There were five people working in this room and all of them seemed to ignore me and each other equally.  Ten minutes later I was finally released.  Good thing they can’t detect explosive audio.  By this point, I wanted nothing more than to relax, so I went to the pub for some cider.  I probably should have eaten something too.

After sleeping the entire flight I made it to Milan where I had to be driven about thirty-five minutes to Bergamo.  Usually this is a good time to find out about the club and the people and just what the night will offer, but the driver didn’t speak any English, and I don’t speak any Italian.  It was a quiet drive after I made a few failed attempts to communicate some things.  Bergamo in the daytime is a beautiful place with mountains looming in the distance.  It was a nice sight, but the only thing I really wanted to see was the back of eyelids.  I went into the hotel and crashed for hours.

I woke up to a phone call from Idriss to go for dinner at the hotel’s restaurant.  It was nice catching up with him while I enjoyed some incredible turkey and red wine, on the eve before Canada’s thanksgiving.  The only disappointment was the size of the meal. It unfortunately made no progress in filling my starving stomach, but at this point I think I was more hungry to get the party.

I arrived shortly after Idriss started playing.  The music was fast, hard hitting, and the people were loving it.  It was really hot too, so a drink was always necessary.  When it was time to play, I felt the energy was high enough to just dive into the more techy tracks.  I thought that my set was good, and people seemed to enjoy it.  I was in a good mood for when Magda came on and was happy to hang out and meet a bunch of fans who wanted to get pictures and to just talk about music.  The only thing that went wrong was that I had virtually no food in me, and I was really beginning to feel it.  Other than that, it was a really great night and a great way to kick off a tour.  It was time to go back to the hotel to sleep before the long day of travel to Mallorca.  We said our goodbyes to our Italian hosts and were off. 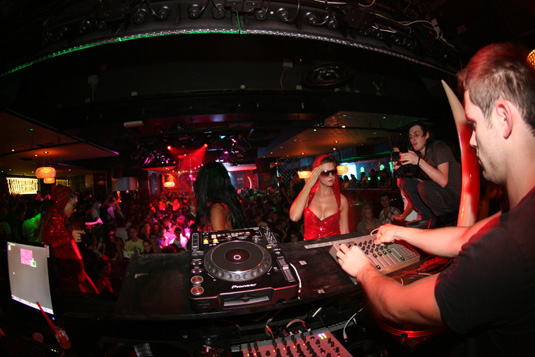 The flights to Mallorca were ridiculous.  We had to fly from Milan to Nuremberg, and then Nuremberg to Mallorca.  If you look at that on a map, you’ll understand why it’s ridiculous.  It was dark by the time we got to there, but I was happy to finally stop traveling and relax at an amazing hotel.  It was so warm that we were able to have dinner on the hotel’s sea-side terrace without needing jackets.  We all shared fresh seafood and were treated to the calming sounds that the Mediterranean Sea had to offer.  Once again, my dinner was a very small portion, but still, somehow I was full.  I think my body was forgetting what it was like to eat food.  Not cool!  I pushed the thought out of my mind so I could fully enjoy my time in paradise.  From dinner, it was onward to the club.

“I guess in Spain the notion of ‘underground’ is different to what I’m used to, partying in dark rooms in abandoned buildings in Detroit”

Walking up the stairs to the club, I chuckled a little as I read in big flashing lights, the words: “Underground Party!”  I guess in Spain the notion of underground is different than the notion I’m used to, partying in dark rooms in abandoned buildings in Detroit.  All that was quickly out of my mind once I walked into the club.  BCM was a really cool place with a pretty nice layout.  It was packed too.  It’s always nice when a club has the space to give the live act their own mixer and large area to work with.  Of course it’s all unnecessary when they don’t have the cables you need, as described in the technical rider.  After hanging around for ten minutes, the cables were produced and I was on my way.  The warm up this time was not as nice as at Fluid, in Bergamo.  This time it was really housey before I played, but I came out swinging, and quickly any notion of house music was forgotten.  The crowd was enthusiastic and the new remix I played went over really well.  It was perfect, aside from the guy who kept asking if I was OK every five minutes.  When Magda went on, I was all about relaxing.  It was a big enthusiastic crowd and Magda played some big crowd pleasers while I stood back admiring the lasers, almost as much as I admired the dancers up on their platforms.  All was well until suddenly I didn’t feel so great again.  Like in Italy, it hit me that I hadn’t eaten nearly enough.  I tried to ignore it and managed to enjoy the rest of Magda’s set.

After she played, we then took off from another great party and went for a nice quiet after hours to hang out with our new friends for a while.  This is where the business of travel and partying caught up with me and I became quite tired.  We headed back to the hotel for some sleep, only to wake up to a sunny 28º paradise.  It was time unfortunately to leave and head back to 8º Berlin.  I wish I woke up an hour earlier to go swimming but that will have to wait until next time.  As we drove to the airport and I watched the palm trees and mountains pass by, I thought that if there was ever a moment to stop and smell the roses, it was this one, because at that moment, with a solid weekend behind me, I was pretty happy.  I learned, however, that if stopping to smell the roses was an age old adage to live by, that there was an equally important one with the same basic idea.  It was my growling stomach that taught me rule #1: Stop and eat solid foods, if you wish to make it to the end of the party.  A rule I’ll not soon forget.

Thank you Italy and Spain, and I’ll see you next weekend, Manchester.