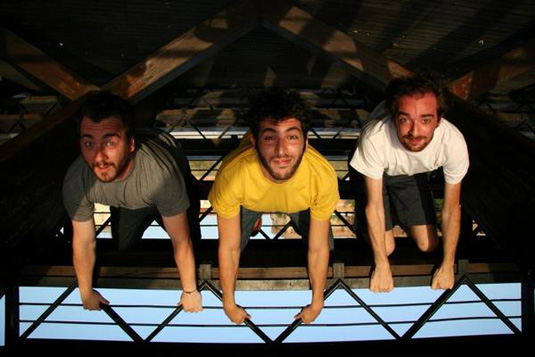 Ones to Watch is a series in which Juno Plus picks out talent from around the globe and chats to them about their influences, ambitions and hiccups on the road to stardom. First up is Clap Rules, an Italian three-piece whose unique form of experimental disco saw them picked up by cult UK label Tiny Sticks. The band consists of sound engineer & multimedia artist Andrea Gabriele, classically trained musician Max Leggieri and Fabrizio Mammarella, who first made his name as Telespazio with releases on Bear Funk and Super Soul. Fabrizio spoke to Juno Plus editor Aaron Coultate.

How was Clap Rules born?

Well, Andrea was organizing an electronic music festival in Pescara, and I got booked to DJ there. Max was the sound man in the club I played at, and we all got talking. We started chatting and after a few weeks we were together in the studio.

Whereabouts in Italy are you from?

We are all from Abruzzo, in the centre of Italy by the Adriatic Sea.

What kind of music did you listen to growing up?

Our musical backgrounds and tastes cover a wide spectrum. I used to listen to dance music like disco, soul, house and techno. Andrea was and still is into electronic, melodic and glitch experimental music, and Max used to play guitar with many famous Italian pop and psychedelic rock artists.

“Soundtracks of b-movies and cartoons made by disco bands in the 70’s are a huge inspiration, not to mention the nice food, wine, nature and sun that Italy provides”

How has your upbringing in Italy inspired the music you make today?

We’ve surely been obsessed by melodies of old Italian songs that we used to listen on the radio. Soundtracks of b-movies and cartoons made by disco bands in the 70’s are also a huge inspiration, not to mention the nice food, wine, nature and sun that Italy provides.

How many times have you played live?

We’ve played a few gigs around Italy, but we really want now to export our show to some other countries. The set up for our live show at the moment has Andrea on a Juno 106 synthesizer, Novation Bass Station and vocoder, Max on the Fender Jazz Bass and guitar and me on drums and percussions.

Have you got plans for a full album?

We’re working on our next single at the moment, and a full album is also planned. We’ve got lots of new tracks that we’re already performing live.

How does the production process work?

We work together in the studio twice a week recording stuff, then Fabrizio starts the arrangement and we finally review the track together. We want to make a mixture of modern dance, funk, noise, dub and killer grooves; we usually mix old synths, acoustic instruments and some electronic madness.

Where did you get the name Clap Rules from?

We’re big fans of hand clapping, we always record the claps from our own hands, it’s a moment of fun and unity between us. We never use fake claps from electronic machine, and we want people to understand how cool the claps are!

“You can see Andrea and Max hanging around in the studio, playing a Moog synthesizer one minute and a cello the next”

You all seem to be big fans of live electronic music – do you feel it has a different/more interesting dimension to recording on computers?

We record on computer but everything is played live. The approach is more creative – Andrea and Max are able to play every instrument, they’re precious musicians. You can see them hanging around in the studio, playing a Moog synthesizer one minute and the cello the next. Computers are useful to speed up the production process. We play all acoustic and electronic instruments live and computers help us to store many ideas and arrange them in an easier way.

You can buy Clap Rules 12″s from Juno Records and digital releases from Juno Download.