Sleaford Mods special pt2 – Andrew Fearn – “If I’m making a track and it gets me dancing round the room then I know I’m onto a good thing.” 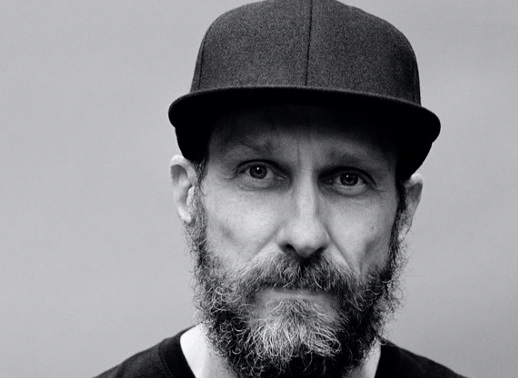 Of course, on the surface it looks like the easiest job in music. When the Sleaford Mods play live, Andrew Fearn’s role is comically uninvolved. He trundles on stage with Jason Williamson, and while the Sleafords’ singer throws himself into extreme, intense engagement, delivering stream after stream of impassioned lyrics, he stands a safe distance behind, opening the occasional can of beer, pressing the ‘play’ button on his laptop at the right time and nodding appreciatively along the grooves. As performances go, it makes Chris Lowe look like Jimi Hendrix.

The reality is, of course, rather different. Williamson’s compulsive antics and instant charisma may soak up the limelight in the live situation, but Fearn’s input in creating the musical framework for his cathartic, stream of consciousness vocals is evidently a key factor without which there would be no Sleaford Mods as we know them.

Fearn knows exactly what he was doing the moment he decided what he wanted to do for a living. “I remember the first time I saw the guy who did ‘19’ (Paul Hardcastle), when he turned up on Blue Peter with an emulator. I thought ‘that’s what I want to do.’ Then they announce they cost £100,000. Right, I’ll just give up the dream now.”

Thankfully, he never did though – and anyway, these days, as he observes, laughing, “you can get one on your phone.”

With the aim of discovering a bit more about this enigmatic fixture in 2021’s music scene, we catch up with Fearn at his dad’s home in Lincolnshire, most specifically in the studio space he calls his ‘base camp’. He shows off the sound-to-light panels on the wall, which add a bit of disco atmosphere when needed. As he tells us, his benchmark for music production is simple enough . “If I’m making a track and it gets me dancing round the room then I know I’m onto a good thing.”

We were under the impression – or at least had heard the vague rumour – that you lived on a houseboat, Andrew. Not true? That was a few years ago, he tells us. It sounded like fun to us – was it?

“Not really, no,” he says, explaining it was less his wish than that of his partner of the time. “I did it for them and then we got divorced.”

He’s always meant to buy a place of his own, he says, as his cashflow has improved with the steady rise of the Sleafords to one of the biggest bands of the day. But time, with the duo’s gig diary bulging for years, and now lockdown, have meant he’s just not got round to it and has continued to inhabit ‘base camp’.

This unobtrusive, disco-lit back room is where many of the ideas for the songs that the Sleaford Mods have used to stamp their uniqueness – both lyrically and sonically – on what at times can seem like a very conformist and old fashioned music scene. He sees parallels with today’s music industry and the old skool comedy that alternative comedians arrived to smash in the early 80s.

“It’s like the thing with The Young Ones and all those comedians, the BBC just putting the Two Ronnies on constantly forever, they just wouldn’t let things progress. It does create a suppression and a creativity comes out of that I think. We’re kind of going through the same thing now – there’s tons of great new music but people are still going on about Britpop, you know what I mean. It’s a bit insulting I think.”

It’s ironic – or perhaps just seems right – to recall that it was actually Oasis who brought Sleaford Mods to the public’s attention with their endless panning of the band, the two warring Gallagher brothers apparently united on this matter and this matter alone. Andrew hasn’t got much positive to say about them, understandably. “Oasis were a pub band before that,” he says, meaning the moment Britpop became staple Radio 1 daytime playlist fodder. “They should have stayed a pub band.” 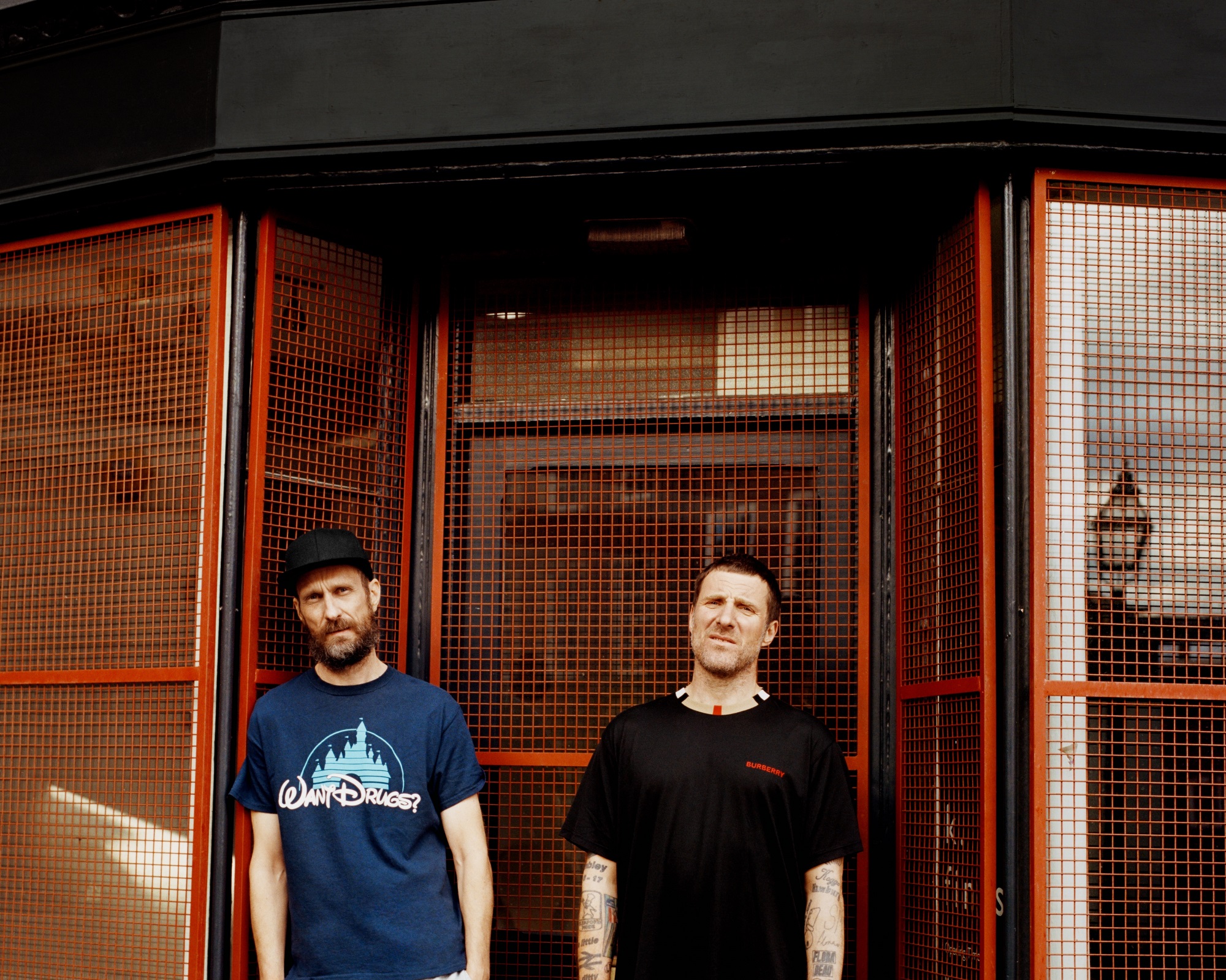 The war that Fearn and Williamson have been fighting has been altogether more constructive, mainly letting the releases do the talking. Admittedly, by the time Fearn hooked up with Williamson, both had had enough time to cut their musical teeth. Williamson had already made four Sleaford Mods albums, mainly using samples of other artists’ work as a backdrop for his vocals, while Fearn had recorded quite extensively as Infant and to a lesser extent Marks Brother. He’s also continued recording solo electronics as Extnddntwrk throughout the Sleafords’ career, branching out more recently into audio/video work.

The conditions, evidently, were just right and the pair got off to a highly combustible start and from 2012’s amusingly titled Wank album to this year’s Spare Ribs, the eleventh SM album and seventh together, they’ve simply kept up the pressure and slowly ratcheted up their career to the point at which, this year, they’re booked into massive shows like their outdoor extravaganza at Crystal Palace Bowl this August, and enjoyed top five album chart status for the first time.

“It was made all over the place,” says Andrew of Spare Ribs, even though the main modus operandi of ideas being formed here at base camp and sent to Williamson for ideas remains the central way of working.

“The last thing we recorded was ‘All Day Ticket’, but that was a piece of music I’d made two years ago. ‘Mork & Mindy’ was done on this little pocket operator that I’d made on tour. So I was playing with that on the bus and Jason came up with the lyrics for it. But some of the tracks were done here, I have a base camp here for doing stuff, so it’s kind of a mixture.

“The process tended to be that I made stuff here and then we worked on it when we got together. But I have noticed that there is a difference in the music depending on how it came about – how off the cuff it is, how late it is, the potential of the idea. Making music is about the process, much like it is with making art, physical art. You can see it’s enjoyable and that’s always been a strength of mine, and I think we live in a time when that is more appreciated. People want to see more of the warts.”

His instantly recognisible ‘redux’ style of reducing, stripping back, even boiling down a track to its bare bones, is key too its success in his eyes. The huge amount of technology available to producers comes with it almost infinite possibilities, he points out, but perhaps at the cost of a feeling of spontaneity.

“There’s also something to be said for things being not quite right,” he adds, relating the tale of picking up a cheap and not particularly pristine bass guitar in a Hammersmith studio for the Divide & Exit session that would form the backbione of one of the band’s most beloved tracks ‘Tweet Tweet Tweet’.

“Everything’s indirect – that’s why documentaries are so interesting to watch – that sort of window into the person’s self, that’s what people are interested in now. People don’t want to see a virtuoso musician. They can go down Brighton pier and see that now. It’s the kind of world we’re living in. People would rather see ‘The Making Of…’ than the actual movie.”

He sees the band’s work, stripped of its decorative but ultimately unnecessary edges, as continuing that punk spirit. “Something that’s almost achievable to someone else is always inspiring, isn’t it?”

That said, as anyone who has explored the band’s catalogue will tell you, punk is just the tip of the iceberg when it comes to the make up of their sound. Fearn declares a love for the pop of his early childhood. “In 1983/4 there was really cool stuff in pop music In terms of British stuff, Eurythmics, Bronski Beat, Depeche Mode, better pop music from Britain – and then it all went over to America. I remember buying the 12” of NWA’s ‘Express Yourself’ in 1989 – that was my ‘in’ to hip-hop.”

He finds it incredible thinking about how inaccessible music was then compared to these days of streaming and YouTube opening up decades of music to the curious. “I didn’t hear stuff like Kraftwerk until I was 20, not really,” he admits,

“They weren’t exposed in the way they are now. Even more commercial stuff like Gary Numan, it wasn’t recognised as being important in music until years later, until the next generation – until ‘our’ generation was running the country. By 1990 I was not listening to pop music at all, and getting an education with 70s music like The Doors, Led Zep and then listening to American stuff like Butthole Surfers. People doing me mixtapes suddenly exploded my world.”

From those simplistic days of early synthpop through to hip-hop, stoner rock and punk, the Sleaford Mods sound seems to encapsulate it all and regurgitate it in a sleek but inherently intact version that can live and breathe – and occasionally kick up the arse – the music of 2021. In many ways, Sleaford Mods are that missing link, a spiritual continuation, a reminder of alternative music’s roots as a truly counter cultural affair in the modern age. The fact that it’s resonating so clearly right now shows we need them more than ever.