“People seem to have forgotten about the polyphony of different voices that made up post-punk,” reckons frontman Charlie Drinkwater.

TV Priest, the latest signings to the Sub Pop empire that brought us Nirvana among many others, have been talking to Juno Daily about their just-released explosive debut album Uppers.

The band’s frontman Charlie Drinkwater (pictured, with dog) has also been telling us about his successful parallel career – designing record covers for bands as illustrious as Fontaines DC and Sigrid, as well as the band’s own.

“I’ve always loved art, I’ve always been a scribbler. As I got older, I found music and I found that was a really good way to connect with my friends and be part of a wider community. As I progressed and bands I was in ended and I couldn’t make music for certain periods of time, art was a way to ensure that I stayed in there. If I couldn’t be the one in the band making music, at least I could make a poster for them.” 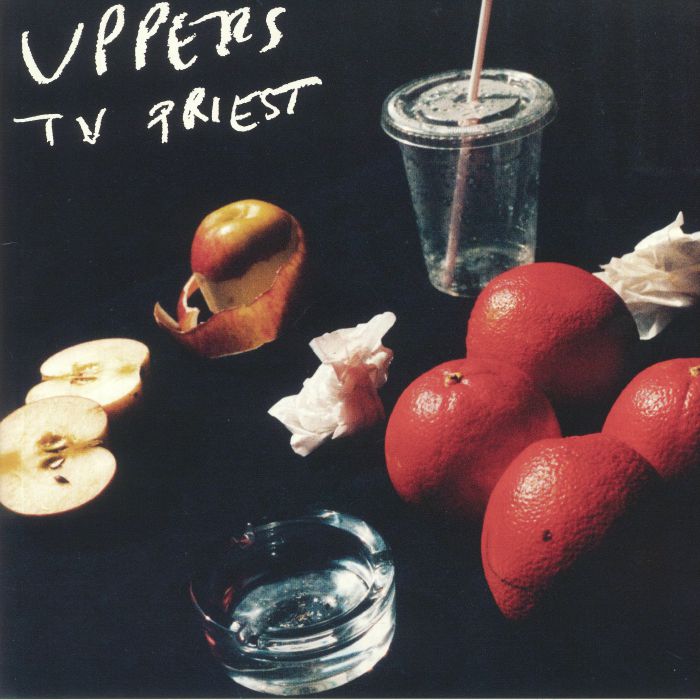 The cover shot for the album sleeve, taken by photographer, Morgan Hill Murphy, is actually a low brow version of a Dutch master.

“We were talking about the idea of symbolism in a Dutch master, the way an apple can signify something. It’s a kind of joke really, a sort of subversion of that idea really. The record is very DIY, we produced it itself, so we were thinking ‘how would you make a DIY version of a Dutch master’? A lot of the Dutch masters were just a bowl of fruit or whatever, they were quite DIY too. I really enjoy that tension between high and low art.”

The band, meanwhile, who’ve been firm friends since teenage years, have found themselves being talked of as part of a new wave of post-punk bands, spearheaded by the new, heavily Talking Heads-influenced incarnation of Shame. “It’s interesting to me to think about why people are revisiting that music, from the late 70s right through to early 90s,” says Drinkwater, “and revisiting the very plain messaging in political as well as poetic terms that it had. There is an interesting intersection happening right now.”

Drinkwater himself is a huge fan of wide swathes of music, from The KLF to Fugazi, and the band list Protomartyr, Ought and The Fall among those that have shaped their sound, as well as namechecking prog and Krautrock. ““It’s not like I’m particularly worried about being included in the post-punk thing but I think that people seem to have forgotten about the polyphony of different voices that made up post-punk. Early dance music is also post-punk. If anything, I think we lean towards the heavier side of punk.” There’s definitely a sense of sonic deconstruction and abandon that has more to do with hardcore than the carefully presented image of early Talking Heads or Wire, something that combines the abandon and energy of hardcore punk with sharply honed songwriting skills.

“Approaching the art for our album,” he continues, “I was very aware that I could make something that looked very post-punk,” he says, “that was something I was really conscious about. How to represent the fact that we are really DIY and do record and design everything ourselves, without going for something crappy that just says ‘this is a punk record’ or ‘this is a post-punk record'”
Ben Willmott