Behind the scenes at what would be Phil Spector’s final recording session, mere weeks before he murdered model Lana at his LA mansion 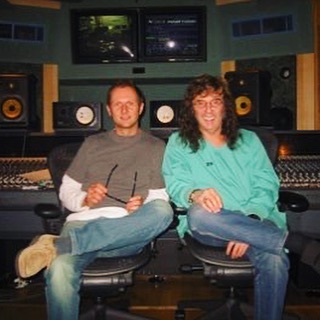 Danton Supple (pictured above, left, with Phil Spector, right) was already well known as a producer when he got a strange call from Jeff Barrett of Heavenly Records. Would he engineer the album sessions for the legendary Phil Spector and young British band Starsailor? Too right he would. But as he tells Juno Daily, things did not run smoothly…. Within weeks, the session was abandoned and Spector – who died earlier this year – was on a murder charge.

“The session was Starsailor, doing their second album, called ‘Silence Is Easy’. It had the track ‘Four To The Floor’ on it which was number one in France and made the album go to number one in France. I had a pretty bad desal on that album – I made some money off it but I should have made a lot more. It’s because I changed positions. I went from being engineer to producer.

I was mainly producing at the time anyway but Jeff Barratt from Heavenly called me up and said would you be interested in engineering a session. He knew me, so I thought that was odd in the first place, he knew I hadn’t engineered for years. Then he said it was Phil Spector so I was like ‘ooh yeah, course I will!’ That sort of thing’s worth a few weeks of your life.

Most of the time he was really amenable and easy. He was like a standup Jewish comic. He was always telling an anecdote or a joke. But he was also heavily medicated. There was an imbalance there that dictated on a certain day whether he was lucid and charming or a dribbling wreck. And that’s kind of why it came to end with the band, which was when we’d been at Abbey Road for a few weeks. Because it started off at Metropolis.

It turned out he was trying me out as much anything. He did have an American engineer who he’d worked with in the past. We actually got on really well. The bad side of Phil I only really saw when it came to other people. He had this certain way of being with certain people.
He was always very amicable to me. I was with him for 12 hours a day at the time, for the best part of a month. So the band were downstairs a lot of time and I had a lot of one-on-one time with the man.

This was literally moments before the shooting. So people always ask about his mental state at the time. But he hadn’t drunk for a long time at the time, I remember him telling me that. So when I heard that when he killed Lana he’d been drinking, I remember thinking ‘god, if you add alcohol to that mash up he was already on, it’s going to be pretty messy.’

I managed to record a lot of the conversations – I had a laptop there at the time, and I had it recording a lot of the time so you could remember things but I was literally just looking back at the audio after all these years. Him just banging on about stuff in a manic way. Hours of him going into tirades about people. And then there’s me, well, not goading him but talking to him about guns. I’d be like ‘come on Phil, you like guns, what have you got?!’ It was quite interesting. He was a fanatic. He had a range at his house, I remember him mentioning that.

I was also aware that he had this really firey temper that would go off at other people, mainly at his staff, he would launch into rages. He was pretty aggressive family-wise too, to his daughter who was there quite a lot. He was also known for his financial meanness. When I was with him he’d just won a final settlement with one of the Ronettes. I remember him punching the air going ‘fuck her’. I said ‘you’re a multi-millionaire and she’s in the financial doldrums,’ but he’d carried that case on for a long amount of time, he was that kind of character. He fired his security guard when we were there, a guy from LA.

He was at a hotel in Mayfair at the time. I think. It was kind of divide and conquer – he didn’t want me going back with the band some nights, so he’d say ‘hey, can I take you home tonight?’ But we’d never really say anything, we’d sit in the car and he’d talk to his security guy or the driver. He’d be sat on the seat like a little bird, because he’s tiny. I remember him sitting there one night, singing to himself “I’m a lucky mail man” in this pixie voice, and me thinking “you are fucking mental”. Then he’d demand a sandwich and say ‘I want pastrami on rye with lots of dills” and I was like ‘this is London mate, you’re going to get a sandwich from a service station if you’re lucky.’ He lived very much in this dream world of Phil Spector. His life was surrounded by wealthy people and famous people, so there was always going to be a massive amount of name dropping, but they were funny stories. John Lennon, The Beatles, Paul McCartney, he talked about parties with Gina Lollobrigida, Anthony Hopkins. He had all these bizarre anecdotes.

He had this competition with him and Mickie Most in the 60s, who was like the English equivalent at the time, they were both having huge success at the same time. I was working at RAK studios where Mickie worked and lived and owned, before he died. The family still owns it. He told me he’d had a meeting in LA with Phil, he called me over to this bizarre fake mansion in LA, they’d gone into Phil’s study and he’d opened the drawers to reveal these drawers full of cash. It was essentially Phil telling him “you may have had a lot of hits, but I’ve made way more money.” That was the whole point of the meeting it turned out, just so Phil could show off and be better.

He had a whole load of weird things going on. He wore four watches. And he had these platform shoes. He wore a cape all the time with PS monogrammed on the front. One day he called the security guy over and said ‘hey man, can you get my slippers?’ I was thinking, this will be interesting seeing him in correct size footwear, but he pulled out these huge foam platform slippers! So, ah, maybe not!

He was incredibly vain. Every morning would start with him looking at a picture on his phone which I knew was him. He would say to his assistant ‘hey, take my picture’ and he’d pull exactly the same expression like it was made in stone. There was no real difference between any of these pictures. But then he’d stare at it for ages, most days. Either it was making sure that the wig was aligned properly. I hadn’t even realized it was a wig, then one day I’d think ‘oh, I didn’t see that grey curly bit before’ or ‘when did that blonde fringe appear?’ Then one day, accidentally his PA, she was trying to show me another photograph, showed me this picture of his hotel room at the Savoy and it had all these heads with wigs on, almost like for different days of the week.

One day he said ‘hey Gina’ – I think that’s what his assistant was called – ‘take a picture of Danton’. So I sat next to him and she took the picture, but as soon as he got it he zoomed in on himself, I was zoomed out of the picture! Then with that picture, I used Photoshop and put Phil’s head and hair on my body, jokingly, and gave it back to him saying ‘I think I’ve found you the perfect engineer’. He kind of stared at it and made these weird grumbling noises, going ‘how did you do that?!’ He got up, staggered out of the studio and left and didn’t come back for three days!

With the way he worked, it was like stepping back 30 years with the technology and the way we worked. He hadn’t worked in a studio for years so none of the stuff Protools meant anything to him. I spoke to him before the session on the phone and he said: “I want a reverb, a tape delay and a flanging machine – a flanger basically. So I set that up. We were going to tape – I set up a Protools back up so that everything was duplicated and going through the machine. Phil worked so that on the first day we’d do the drums and the bass and somebody maybe doing a few chords on the piano, so he sticks effects on it, bounces it all to stereo on the multitrack, and then wipes it all (the individual parts) on the multitrack. So the next day he’d work from what he’d bounced down. I totally freaked – I was like ‘what, we’re going to do what?!!’ That’s quite a commitment. I kept a copy on the Protools in the machine room but I didn’t tell him because he’d think it was black magic or something.

At one point he said ‘oh, I wish we’d done it this way instead of the way we’d done it’ and I said, we’ll, I think I might be able to help you. I went round to the machine room and got the (pre-bounced) parts and again, he was like ‘how did you do that?!!’ So then there were a few things I could fix retrospectively.

It went from there being huge excitement at the start of the session, but because the gameplan was very similar with each track, the band were increasingly unhappy. Some days he was absolutely away with the fairies on some days. So I spoke to the band and said, you know, ‘Phil is a fucking legend in this business so we either cancel it because it’s not working out or get on with it and respect the way he’s working, make an effort and move forward’. That’s how I felt at the time. Then it was like, we’re not really making the progress, so it was time to go. I said to Phil ‘it’s not really working with the band’ but to him, he’s Phil Spector, what does the band have to do with it?! That kind of mindset.

So then he wasn’t going in and the label decided to call a meeting and he went fucking nuts. The first thing Phil does with anything is call his lawyers. That’s the reason he didn’t go to jail for six years after the murder. They were on the planes in five minutes and they had a meeting that I wasn’t party to – it was them and the band and it collapsed immediately.

He didn’t say goodbye – he sunk into his little cape like a squashed bird. He flew back home and did what Phil does well – flew into a rage about things. A mutual acquaintance in LA told me he’d said I’d undermined him to get the session, because I was now producing the record. All in all, it was pretty odd.”