Could Pittsburgh Modular’s all-in-one synth voice be the best way to get started with modular synthesis?

If you’re curious about getting into modular synthesis, there’s a surprisingly strong case to be made for the idea that the best approach isn’t to get yourself a modular synth at all. As paradoxical as that may sound, a self-contained patchable or semi-modular synth gives you a solid grounding in the modular approach while usually costing less than a basic modular setup.

Freshly updated with a new look to match the rest of the brand’s products, the SV-1B Blackbox is Pittsburgh Modular’s solution. The SV-1B doesn’t quite qualify as a true modular synth, insofar as it’s all housed on a single front panel rather than separate modules, but it’s completely patchable like a full-blown modular setup. The synth is internally ‘normalled’, meaning that there’s a basic pre-patched signal path, so you don’t actually need to plug in any patch cables in order to make a sound. However, the whole point is to experiment with the patch cables you’ll find included in its box, turning it into a proper hands-on introduction to modular synthesis.

The SV-1B is effectively a mini modular setup in a single box, including everything you need to get started with modular synthesis. It’s also available as a Eurorack module version, but this Blackbox version is essentially the module in a dedicated case with a built-in power supply, AC adapter and patch cables, meaning that you don’t need to buy a rack or any of the other costly accessories required to get started with ‘proper’ Eurorack modular synths. 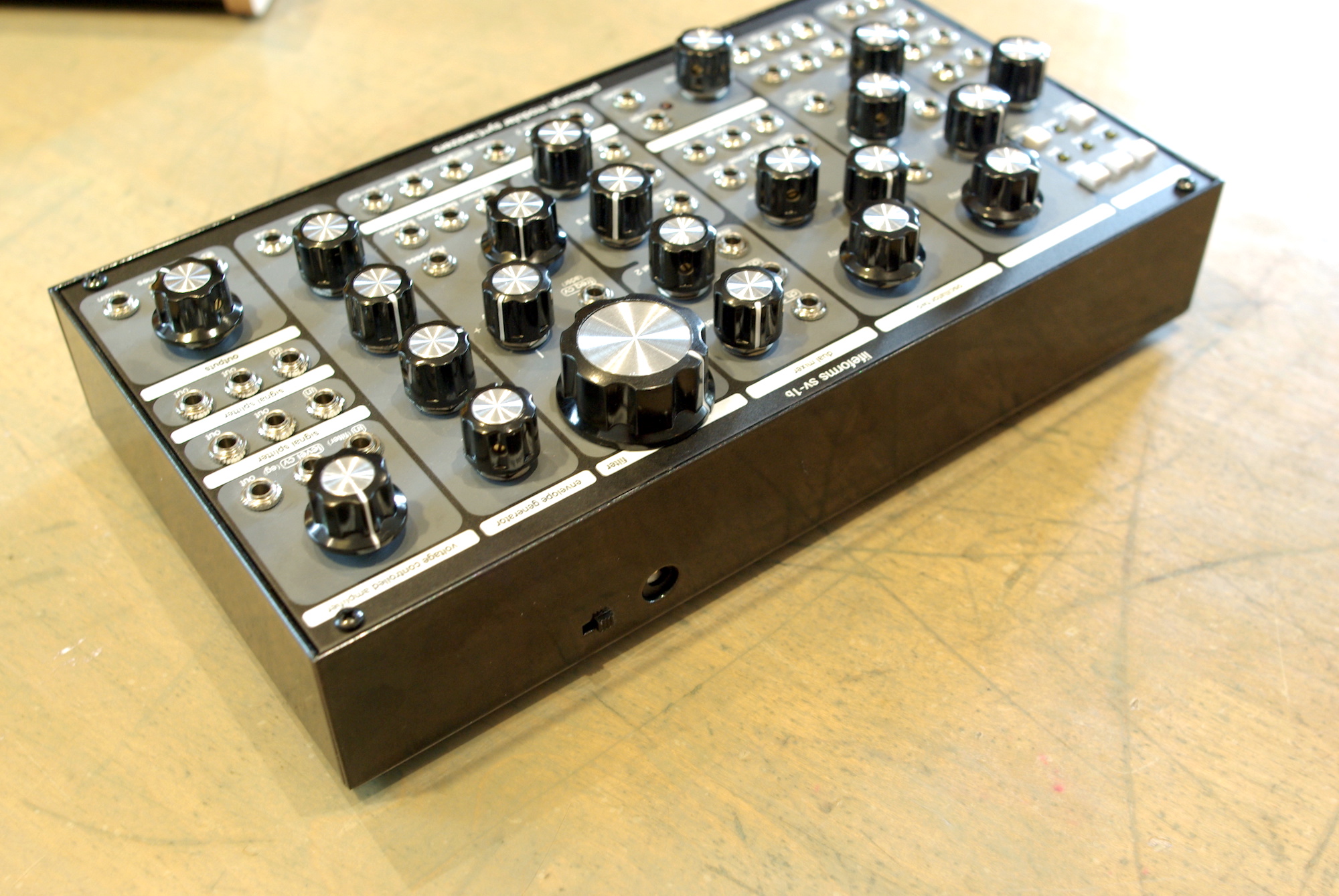 The synth architecture itself is fairly conventional: two oscillators, an LFO, a two-part mixer section, a multi-mode filter, an envelope generator, VCA and various ‘synthesis tools’ (sub-oscillator outputs, noise source, sample and hold, etc). If that sounds like quite a simple instrument, the really exciting part is that there are a grand total of 56 patch points on the front panel, allowing you to configure the synth in any way you want. The internal signal routing sets it up as a basic single-oscillator patch with a choice of oscillator tones at the mixer section and a low-pass filter, but you can go as complex as you like once you start patching it yourself. 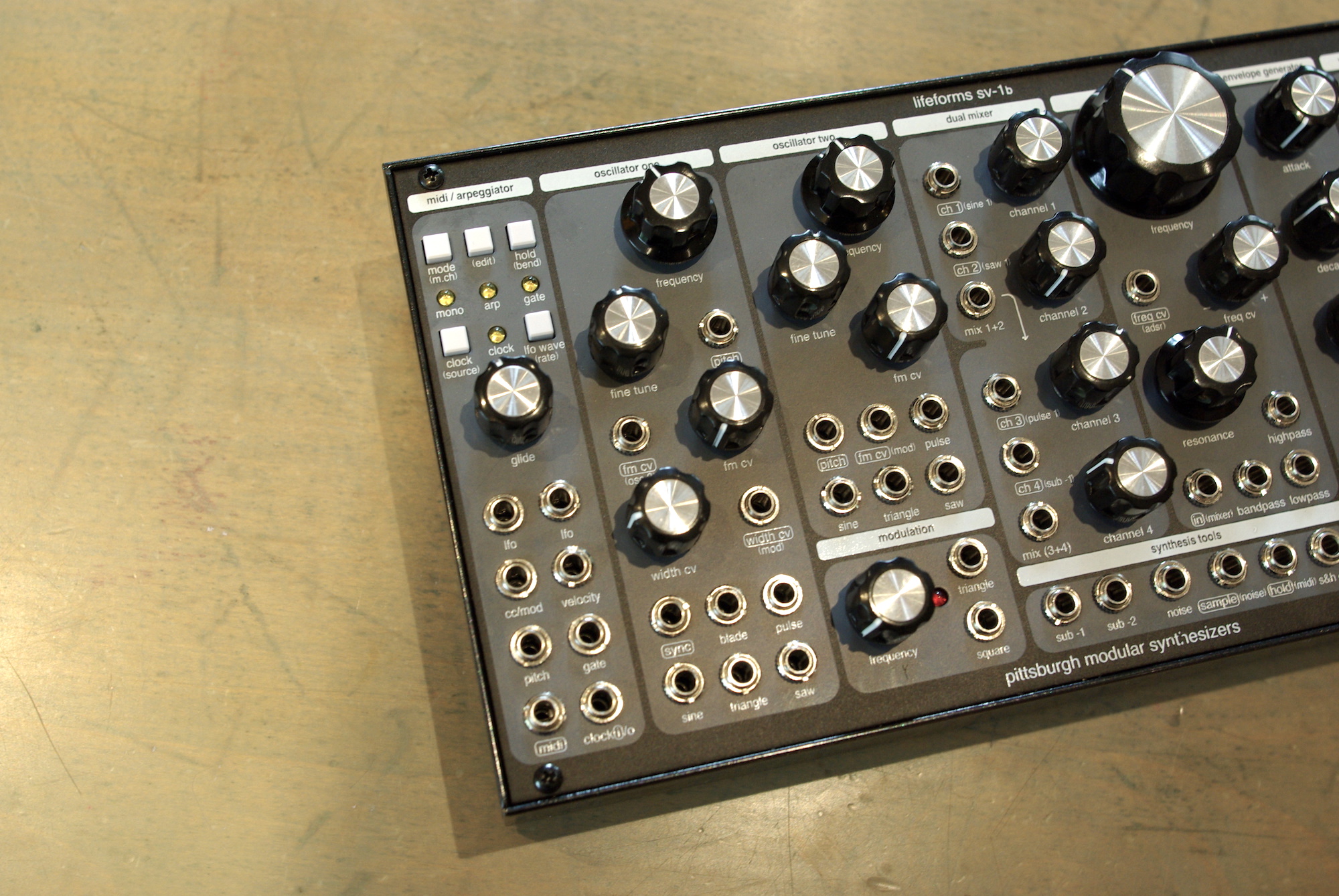 There are some really neat features hidden in the SV-1B, from the well-integrated MIDI section and arpeggiator, through to the surprisingly flexible oscillators. Importantly, however, none of it gets too complicated; Pittsburgh Modular have found a nice compromise between powerful sound, versatility and user-friendliness. The SV-1B proves most adept at big and bold sounds, serving up classic weighty bass tones with a retro feel, sizzling leads and quirky acidic FX.

Modular synthesis can be overwhelming for beginners in a lot of different ways. Before you even get started patching, there are countless decisions to be made about everything from what kind of case to buy through to the exact choice of modules. The SV-1B takes care of the basics for you, offering everything you need to get started with patching your own sounds and exploring the potential of modular synthesis. Once you get to grips with the potential of the synth voice on its own, you can patch it to other Eurorack modules to expand its sonic palette. The SV-1B itself can even be removed from its case and fitted to a standard rack enclosure, allowing it to become part of a much bigger setup. As an introduction to modular synthesis, it’s hard to think of many more accessible options.