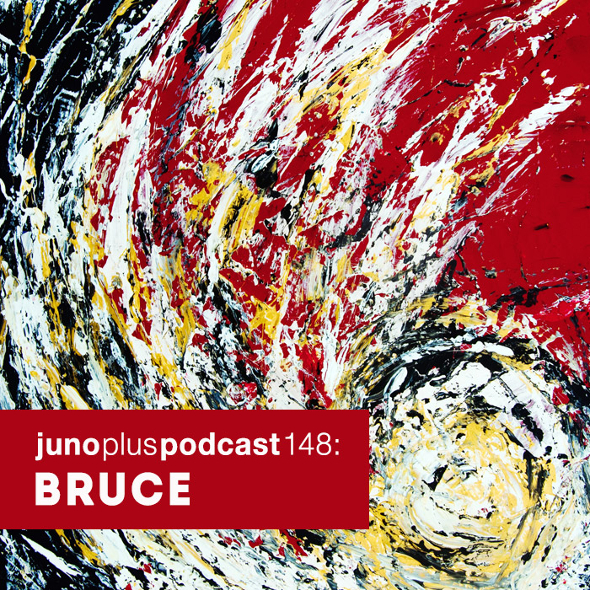 Our final podcast is a slow and sludgy selection from the artist known simply as Bruce.

Look over Larry McCarthy’s lifespan as a producer called Bruce so far and you’ll discover it has been characterised by a clutch of questions. Back in the summer of 2014, the dominating line of enquiry was “who is Bruce?” after a series of deadly productions popped up in the setlists of Pev, Ben UFO, Kowton and associates attributed to this most unnassuming of names. When it was subsequently revealed Bruce was but a “music producer and DJ from Bath, Somerset” the questions halted momentarily to marvel at the pedigree of his Dnuos Ytivil and Hessle Audio releases.

The next question surrounding Bruce was “when is “Steals” being released?”, in reference to his track of the same name whose structural elasticity had been roadtested extensively before finally appearing as the lead track on his 2016 return to Hessle Audio. This year has been a fine one for the perma-beaming producer in general with that Hessle 12″ augmented by an emotionally-loaded Idle Hands debut, The Trouble With Wilderness, that further demonstrated his range as a producer. The finest break-up single of 2016? Not content with these two records, Bruce has another 12″ pencilled in on the ever-blossoming Timedance label operated by contemporary (and housemate) Batu which is due at the end of the month.

We have been pestering young Larry for a podcast since being blown away by those first two Bruce records back in 2014 and it feels quite right for him to provide this closing entry into our podcast series. The submitted selection nudges past the hour mark and spans unreleased material from Batu, Simo Cell and Bruce himself alongside sludgy tracks from Stott, Cloudface, 33.10.3402 and more. McCarthy was kind enough to answer some questions regarding his music, revisiting his painting, living in the “Utopian Timedance Commune” and whether he has a nickname for the Hessle Audio boys – read on for those.

Hi Larry, how are things?

Pretty good thanks! Off the back of a great summer, I’m especially happy of the effort I made to just go outside and sit in the sun more. And I’m looking forward to the smells and colours of autumn and how they are the perfect accompaniment to a season of reflection and new beginnings.

Thank you for putting this mix together, was there any specific themes you looked to explore whilst doing it?

After being inspired by sets from some of my favourite Bristol locals, the likes of Amos and EC Rider, Giant Swan and Lurka, I started playing a load of sub-120 stuff around the start of the year. I feel there’s something quite sexy and provocative about sludgy and slow BPMs. Plus, in many cases the tempo was really powerful in shaping the dynamic of the room, whether it was used to limber up limbs at the start of the night or to step up stomps, following a set of more uptempo stuff.

Was it laid down at this fabled “Utopian Timedance commune” we’ve been hearing about?

Yes, but I prefer the title of Cottage Of Dance. I’m pretty sure my total lack of organisation and impulsive behaviour/comments drives both Batu and Ploy mad. Plus, there is much to be desired on the house upkeep from the mould and plumbing issues. On another note, the not so infamous but still not-to-be-fucked-with fourth resident, DJ CLASHFINDER has left us this month. His military order of things and amazing cooking (of which I regularly, secretly helped myself to) will be missed. But the silver lining is that we now have Via Maris living with us! Very much looking forward to taint him as soon as poss…

You recently took to Twitter to question Ploy’s commitment to keeping the commune tidy, would you like to clear that up?

Great pun there, Tony. He does actually clean up more than me so my retorts are usually met with a great deal of abuse.

What are the positive benefits of living with friends and like-minded producers on your own creative process?

Other than cut throat rivalry that drives each other to piss in each other’s mouthwash, you can pinch their kit when they’re out. BUT I’VE BOUGHT NEW NEEDLES NOW OMAR SO GET OVER IT.

Let’s discuss your upcoming Timedance record, who proposed it?

Batu did; his work with the label/party is starting to be recognised as a formidable force in the UK techno scene. It’s clear he’s on to something and it’s really exciting to be part of the movement he’s creating.

When do the two tracks date from? We were told “I’m Alright Mate” has been on the figurative dubplate for well over a year.

Ah bloody hell, yeh. The project file dates back to March 2015. This is in all honesty mostly my fault as I was farting around with the B-side for so long. Of which, during the writing process has changed titles three or four times and moved around within a 15 BPM range. Just keeping Batu on his toes… 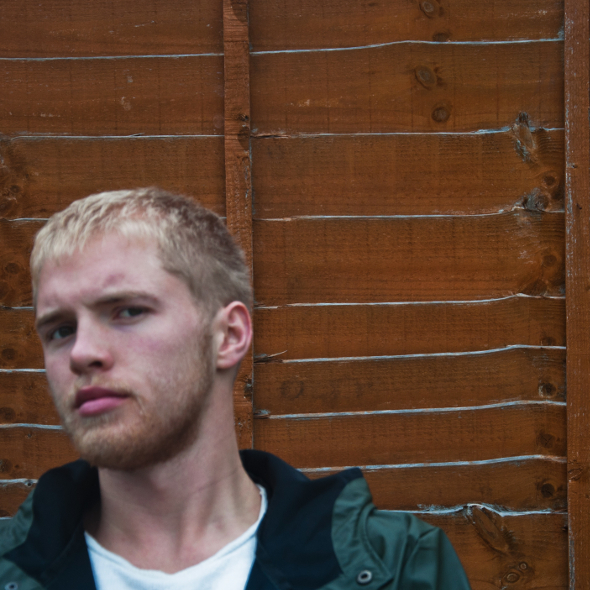 There are some quite explicit themes explored on the two tracks; were you drawing from personal experience with “ignorance, blind condescension and amphetamine fuelled brawls”?

“I’m Alright Mate” was written during my time stuck back in Bucks with my parents after Uni. All the self-worth and identity I’d found in dance music and immersing myself in a new culture that I felt now defined me, all of a sudden meant nothing to anyone around me. And after repeatedly being asked  “what you doing back here then? You not learn anything at that uni of yours?” I named it after what I’d swallow my pride and respond with – “I’m alright mate”.

“Post Rave Wrestle” is quite self-explanatory – me and my boys love to wrestle after the rave. Pangaea was met with quite a surprise after his performance at the Timedance party he played at a couple months back…

The Timedance record gives you another chance to demonstrate your clear talent for painting; we gather you’ve picked it back up after that Idle Hands release, so how often do you spend on it?

Aw, thanks. I’m sure you can imagine there was a fair bit of pressure to get the portrait in the Idle Hands one to be a fair and accurate representation. I was inevitably going to give it to Ellie’s parents so I spent bloody ages on it. The art I did for Lurka’s Timedance004 was a little quicker. But this one took me collectively 2/3 hours. Unlike the others I didn’t really think about it too much or have any direct stimuli. Just boshed it out. Bear in mind, I’m not for the whole “involvement in the whole creative process” vibe. I’m just a narcissist.

There was clearly a lot of emotional weight behind that Idle Hands record, were you happy with the response it got?

Overwhelmed. So nice to know how much people dig proper soppy and emosh techno. Waiting for a very special occasion, I only recently played the title track out the Make Me party at Corsica. I finished on it before Dj Sprinkles; pretty much all of my friends were in the crowd and I got a chance to explain how much of an inspiration Terre’s work is on that record. So that was nice!

We’ve learned recently Objekt refers to Ben UFO, Pangaea and Pearson Sound as ‘The Hessles,’ do you have your own nickname for them?

Hahaha! We do. But I might get done for libel.

Can you put a figure on the amount of times you were asked “When is “Steals” being released?”

No, but I’ve already started counting how many times people respond to me with “I’m alright mate”.

Beyond the Timedance release can we expect any further records from you this year?

Probably not but big things in 2017 cometh!

A slight deviation to end on here, but what made you choose the name Bruce?

Hahaaaaa. I can hear the groans from anyone who is unlucky to spend a significant amount of time with me on reading this as they have heard this story so many times. BUT I STILL LOVE TELLING IT SO YOU’LL HAVE TO ASK ME IN PERSON WHEN YOU SEE ME! BYEEEE!!!