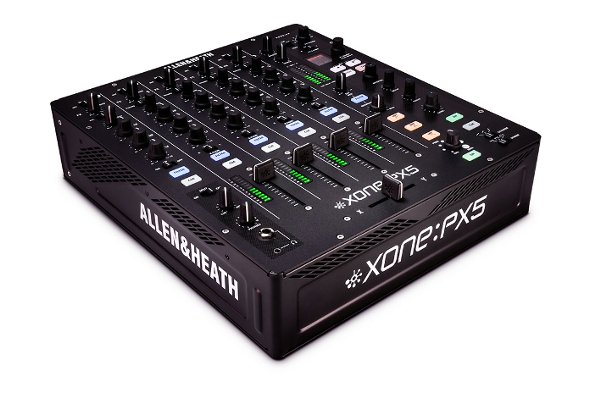 The English manufacturer are preparing the release of a new user friendly make.

Following its unveiling at Berghain Kantine’s space in Berlin earlier this year, full details of Allen & Heath’s Xone:PX5 mixer are finally beginning to make their way out. The three band EQ isn’t quite as technical as their XONE:92 model, the current industry standard DJ mixer, however it does rank up there as easy to use as previous mixers like the XONE:DB4, XONE:43 and XONE:DB2. The analogue Xone:PX5 consists of four channels with three-band EQs featuring, of course, Allen & Heath’s much loved high, band and low pass filters. An extra mono or stereo channel has been added for the option of performers wanting to add a drum machine, synth or MC chatter into the mix, while built-in effects can be assigned to each channel, pre or post-listen.

Traktor DJs using Allen & Heath’s Xone:K1 or Xone:K2 controllers will find hooking up simplified through the USB X:link on the Xone:PX5’s rear. Furthermore, an effects unit is laid out on the right-hand-side of the mixer which also allows for the control of MIDI devices via a five-pin DIN MIDI connection with a 20 channel, 24bit, 96kHz, USB2 internal soundcard under the hood. For extra visual identity, coloured metering sensitivity and signal detection has been updated for more accurate readings, in addition to a BPM counter. Full details of the Xone:PX5’s release date and price are yet to be disclosed however there is suggestion it will retail for around $1500 US. For more information see Allen & Heath’s Xone website and a typically funky Pioneer video below.