In one of her first major interviews, with The Quietus back in 2014, Karen Gwyer talked at length about her struggle to balance a desire to make dancefloor-ready techno, and a constant desire to make her music sound “weirder”. In the article, she seemed conflicted – as if focusing on making people dance was somehow an affront to her experimentalist roots – yet balancing these two contrasting demands has become her musical trademark. 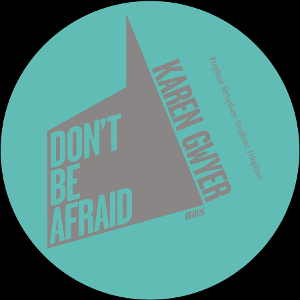 This is certainly the case with the majority of the music she’s released since parting company with No Pain In Pop, with whom she released a string of fine 12” singles and a solitary album, all of which defied easy categorization. Her 2015 outing on Nous, Bouloman, cast Gwyer as a maker of undeniably psychedelic electronic music that was not only suitable for more adventurous dancefloors, but was also capable of stirring the emotions.

Her contribution to Don’t Be Afraid’s recent split E.P, “Mom Did It On The Plane”, was also similarly inclined; a burst of skewed alien funk that seemed to borrow as much from Aphex Twin as it did from throbbing, basement-bothering techno, it confirmed that she’d mastered the tricky balancing act discussed at length in that feature with The Quietus. The same could undoubtedly be said about her other recent outing, “Common Myths About Soundproofing,” on Alien Jams. That, too, was a ghostly late night excursion that bobbed and weaved seductively upon waves of clattering drum machine hits and creepy, mood-altering synthesizer refrains.

Further proof that Gwyer may have finally found her niche is contained on this E.P for Don’t Be Afraid, her first full outing for Semtek’s consistently on-point label. It instinctively feels like Gwyer’s work, meaning that she hasn’t compromised her principles in the pursuit of easy dancefloor thrills. Even so, it boasts tracks that will nevertheless sound particularly awesome over club soundsystems. This extends to the obligatory ambient cut, “And Again Those Eyes”, which seems tailor made for warm-up scene-setting.

The single’s A-side, “Prophase Metaphase Anaphase Telophase”, is undoubtedly the headline attraction. Rhythmically, the track shuffles restlessly, built upon percussion programming that sits somewhere in between the distorted, electro-influenced clatter of classic Autechre, and a looser take on the trademark, hi-hat heavy Motor City techno sound. There’s a skewed, acid-influenced bassline – surging, but rubbery – and organ chords that seemingly drift across the soundscape. Throw in some moody, cyclical synthesizer refrains, and you have something that can’t decide whether it’s bold, or wistful; in the end, it’s this unlikely alliance that makes the track so enduring.

Arguably even better, though, is “Meiosis”, a pitched-down but powerful number built around a distorted, pulsing, acid-flecked bassline, slack-tuned machine percussion, and a spacey, three-note melody line. It feels horizontally inclined, yet is notably intense, a feeling that increases as the track progresses. It’s almost as if Gwyer has taken the bold-but-wistful feel of the A-side and taken it too its’ logical conclusion; this is melancholy with an unhealthy dose of fury thrown in.

A1. Prophase Metaphase Anaphase Telophase
B1. And Again Those Eyes
B2. Meiosis Gametes