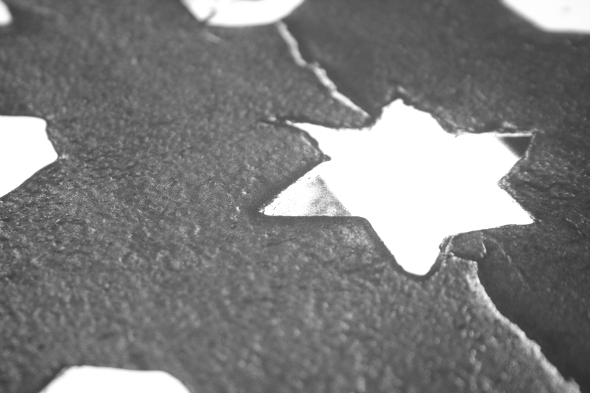 This latest release by John Heckle is dedicated to the artist who gave him his first break. The Sun God is a reference to Jamal Moss, better known as Hieroglyphic Being. It was on Moss’ Mathematics label that the first Heckle record appeared back in 2010. Six years on and the UK producer is using his latest release to recognise this fact. Less abrasive than the I.B.M. side project and more esoteric than the Hieroglyphic Being output, the Sun God is Moss’ attempt to make house music with a deep edge.

Of course in the Chicago artist’s world, it’s not that simple and Sun God records like Ancient Echoes tingle and twist with the experimental approach that is ingrained in Moss’ DNA. Unusually, Heckle has managed to nail this sound on Tributes. While in places not quite as off the wall as the artist that inspired it, it still scores high in the left of centre stakes. “Track 4” is a basic beat track, the kettle drums and pounding bass  making it the most DJ friendly arrangement. Nonetheless, Heckle has succeeded in emanating Moss’ fondness for buckled percussion and warped, metallic sounds.

On “Alexandria” and “Mesopotamia”, he marries these elements with acid squiggles that weave in and out of the arrangement, unpredictable drops and unrelenting metallic riffs. The only real difference to Moss’ approach occurs on “Mesopotamia”, where a pulsing bass and heads-down groove come into play. “Track 2” revisits the kind of gentle, reflective sound scapes that made Trema such a welcome addition to Heckle’s canon.

Even here though there is no escape from the prevailing abstract influence, with glitchy elements cast over the welling waves of sound like a barbed wire border fence. Heckle has achieved a rare feat by mimicking another artist’s signature – that he has chosen the complex sound palette of Jamal Moss makes it all the more impressive.

A1. Alexandria
A2. Untitled
B1. Mesopotamia
B2. Untitled