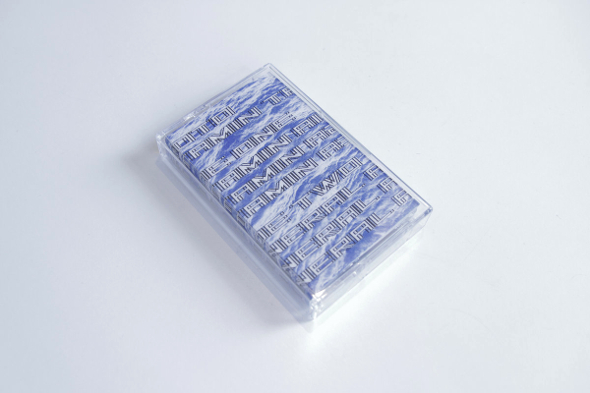 Some music is so delicate it requires you to turn the volume up considerably, just so it can fill the space where something bolder or more brash might have been playing before. It’s interesting considering this when listening to Proto’s Vitamin Tracs, a collection of six tracks primarily aimed for cassette consumption. It’s a mini-album of clean, subtle, looping shapes for the most part, not least on Side A, and as such one imagines the mechanics of the format will inevitably become part of the music as a tape copy wears itself out.

There is a definite split between the two sides of Vitamin Tracs, as denoted by the track titles between the fragile “Vitamins” and the weightier, dub-minded “Minerals”. The B-side in fact comes in so purposeful you would imagine latent tape hiss would take much longer to come knocking. It’s far from belting peak time material, but there’s a strident dub techno presence about the sounds used that fills the mix marvelously. On “Mineral A1,” the echo chamber is in full effect – even the subby kick that comes pumping in momentarily at the two-minute mark is swathed in reverb. From tap drip stalactites to strafing snaps, no amount of decay is spared in the quest for a looming, immersive atmosphere. The melodic tones are the gel here though, seeping through the mix to bring a necessary warmth and intimacy to proceedings.

“Mineral A2” is more out to sea, using a distinctly minimal array of sounds while still adhering to that dub sensibility. Everything feels very smothered, and held at arms length, yet there’s a lot of rhythmic information shaping out the movement of the track. In its own way it crackles with energy, even with a blanket of un-inhaled smoke slowly billowed out all over it. As such, the thick pad that kicks off “Mineral A3” sounds positively riotous by comparison, despite its patent ambient characteristics. Here Proto works more of that aquatic percussion back into the mix, and for a brief moment the nagging ride cymbal almost suggests a kick is going to come marching in and launch a proper deep techno odyssey, but instead the composition remains in blissful, anchorless drift. One suspects an alternate ‘beat’ mix exists somewhere on a hard drive.

While Side B is indeed a wonderful thing, Side A of Vitamin Tracs is what makes this a truly beautiful release. On each of the tracks a perfectly measured delivery gives these tracks an air of sophistication normally recognized in avant-garde and ambient circles. Ostensibly these are (very) deep house productions pushed to the outer reaches, but in the same way as music from Pole or Jan Jelinek the mere presence of a 4/4 kick does not particularly denote this to be dance music in the slightest.

“Vitamin A1” glimmers in its transparency, every gentle shift of progression so easy to feel and marvel at. It initially feels like an open plain of a track, the pad humming on the edges of the mix and the percussion chiming like an errant tap on a hollow lamppost until the subtle tinkle of a bell in the upper frequencies appears, placed startlingly close to the middle. The chord that follows the tapping equally brings the action much closer, the resonance of the note producing an oddly physical, therapeutic sensation.

By way of contrast “Vitamin A2” plunges downwards, the predecessor’s expanse of space replaced by dimly lit caves. It’s far from a gloomy affair though, with match strikes ticking away for light and metallic clangs marking out the walls of this more mysterious space. What becomes apparent here is the prevalence of mantras that pervade Vitamin Tracs, exercising patience in repeating the same phrases in pursuit of meditative perfection. Even if the percussive elements are free to subtly shift their sequences, the looming chord just keeps on, its soothing qualities only enhanced by militant repetition.

“Vitamin A3” is the perfect contrast that proves the point, more brazenly spelling out the transcendental intentions for the music with the patter of hand-drummed percussion sliced into a neat loop. There is almost a suggestion of bass weight here with a single kick every 8 beats, disguised by a chord that sits at 90 degrees to the loping rotation of twinkling tones that form the body of the track. It’s a marvel in simple, hugely effective production that seems completely geared towards replenishment. Maybe the titles lend that impression more explicitly, but it gives the whole release a cohesive concept that the music more than matches up to. Psychosomatic or not, you could do much worse to yourself than giving the healing powers of Proto a try.