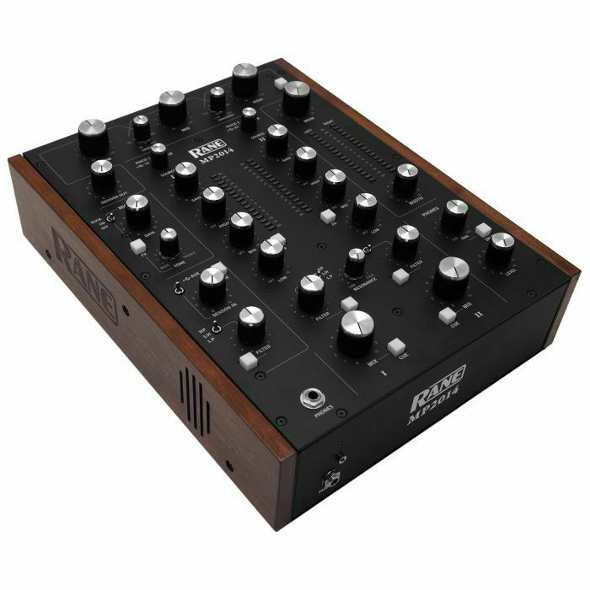 In the grand history of clubbing culture, manufacturer’s Rane stand alongside heavy weight names like Bozak and Urei. They have been highly respected in their field ever since the introduction of the X3000A isolater at the request of Richard Long back in the early 1980s; Long famously designed sound systems for legendary clubs from the disco era including the fabled Studio 54. That’s some high standing patronage, with Rane eventually producing the MP24 four channel mixer in 1986.

Rane are a force to be reckoned with in the DJ mixer market with products designed for the likes of DJ Grandmaster Flash; keeping him in mind, Rane’s product have always appealed to the battle style scratch DJs who champion the company’s magnetic cross fader technology and light but robust build quality. This MP2014 rotary mixer, however, lends itself perfectly to long smooth mixes that are more associated with house and disco than hip hop.

Rane have really dug in their disco heels for the design of the two channel MP2014 which features a classic Rane three-band isolator with adjustable crossover; allowing precise control over which set of frequencies you are looking to manipulate. Each of the channels also includes a three-band equaliser, which also gives you the option of full kill isolation if you desire. Rane have also added multi-mode filters for the two programme channels, as well as an additional multi-mode filter for the auxiliary session channel. Switchable between low, hi and low-hi pass filters, it’s possible to accurately sweep between a corner frequency way down in the depths of 20Hz right up to a dog whistling 20kHz. 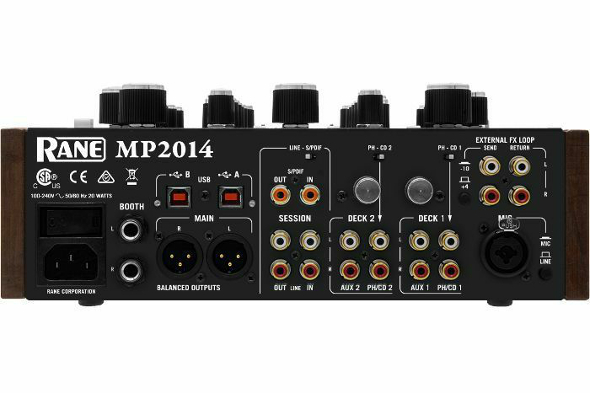 The MP2014’s beautiful design, rotary faders and wooden sides gives it a mystique of elegant analogue nostalgia but its simple design belies the fact that this is a digital mixer with some high-end AKM converters to ensure Rane’s promise of pure sound quality remains intact. The connection possibilities reveal vinyl deck friendly RCA inputs with ground isolation points, switchable between phono and CD line level as well as auxiliary phono ports for each programme channel.

The additional session channel (a kind of auxiliary third channel) is serviced by both digital inputs and RCA ports and with two USB connections; so it’s possible to achieve smooth changeovers between laptop DJs. The mic input includes a combination XLR/1/4” TRS port and there is an FX loop connection for making use of any external effects devices you want to make use of in your set up. A pair of XLR outputs and ¼” TRS booth outputs confirm the pro nature of this unit.

It’s not the only mixer with built in crossovers that falls into the hi fidelity DJ mixer category; four channel analogue mixers by Alpha Recording Systems feature custom components and are markedly more pricey than the more flexible Rane MP2014 mixer, and it’s equally noteworthy four channel brother, the MP2015. There is also the E&S DJR400 that is brimming with four rotary controlled channels as well as a built in three band isolator that is perhaps more affordable than the MP2014 or 2015 but again doesn’t have the connection flexibility.

If you are looking for flexibility in a mixer but want to keep away from Pioneer and Allen & Heath then you are in safe hands with Rane’s MP2014 which manages to deliver both a familiar DJ experience that is comfortable to use and includes the luxuriant feel of rotary control in a simple, well-built chassis.
More info/buy