Primitive Languages co-founder Miguel Enrique Alvarino traces his path from hip hop dancing to the world of extreme noise in this interview with Brendan Arnott.

I catch Miguel Enrique Alvarino at the end of a long day, and I can hear notes of exhaustion in his voice as we chat over the phone from his Brooklyn apartment. Alvarino’s day job is a freelance art handler, meaning he’s just finished eight hours lugging crates of art around the city for a small Manhattan company. It’s employment that rushes him across the city every day, from Upper East Side galleries to installing crates of art in rich people’s mega-condos. “It’s really wild, sometimes you end up in these apartments overlooking Central Park,” Alvarino tells me. “It’s a world that’s so foreign, that you never see, that nobody ever sees unless you’re some part of a service or rich yourself.” He pauses and shrugs, adding, “it pays well though.”

If the world of high-class art collectors and opulent upper class indulgence doesn’t fully appeal to the Brooklyn-based musician, perhaps it’s because he’s had quite different roots. Listen to his music, and you’ll hear sounds of a radically divergent world – murky, industrialized, frenetic, unrelenting combinations of techno and noise music washing over each other until where one ends and the other begins become near-indistinguishable. These mutated rhythms are omnipresent in the Primitive Languages catalogue, which Alvarino runs with fellow Brooklyn friend and collaborator Nick Klein. Together, they’ve unleashed a whopping 15 messy masterpieces of experimental dance music into the world since the label’s conception in 2014, from Wilted Woman’s searing anxiety rhythms to Liquid Asset’s “Colony Denied”, a techno record meets sci-fi narrative that tells the story of colonizers cocooned in flesh-searing saliva by a sentient planet. 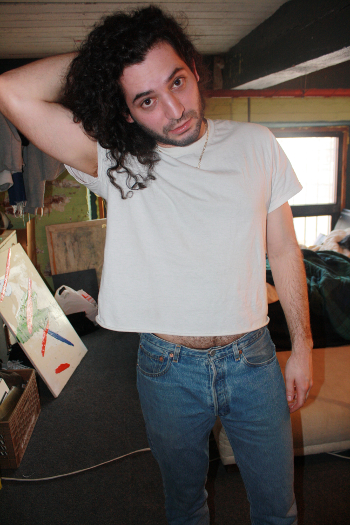 As a solo artist, Alvarino’s last two years have been marked by a prodigious output as well, originally producing under his full name, and then shortened to his middle name, Enrique. His Participation 12″ on North Carolina’s cult Hot Releases label was a buoyant banshee screech of industrial noise techno, with tracks like “Cess” sounding as if they’re soundtracking a sheet metal speed-eating competition, all chipped teeth and gnashing bloody gums. Likewise, his upcoming record on Entro Senestre’s acclaim-gathering Bank Records label is beautifully disorienting, giving off the feeling of being caught in the midst of a hurricane ravaging a tropical resort.

However, Alvarino didn’t immediately immerse himself in the world of experimental noise. “I used to be a dancer through my teens, like, a super mainstream radio hip hop dancer, which is kinda funny,” he muses. “It was crazy, we did this weird big group choreographed dancing, like what you would see in a Missy Elliot video. So, I’ve always been very interested in music, but when I had a chance to go to arts school, it opened me up to a lot of worlds I wasn’t aware of.”

Attending New World School of Arts at Miami Dade College as a painter connected Alvarino to the other half of Primitive Languages, Nick Klein. “We were both in the same class; it was the classic art school scenario,” he chuckles. But it also introduced Alvarino to the thrumming vibes of Miami’s weird noise music underbelly. While Alvarino studied, painted and “made weird things,” he began exposing himself to more and more late night shows that informed his art and music practice. “I was seeing an alternative way of making things – alternative sounds, alternative performances, all from the ex-punks and the weirdo noise scene,” he tells me. Recounting his first Miami noise show, Alvarino draws on the experiencing of immersing himself in the fray: “I remember just having no context for it at all – and seeing something pushed to such an extreme was so attractive to me, I’d never seen or heard anything like that before.”

After art school, Alvarino made the move to New York, where he realized painting wasn’t as viable in a city where gaining access to spaces to store art come at a premium. Instead, he began to synthesize his experiences of New York and Miami, art making and music production into a single cohesive project. “It came as a progression, this realization I can just do a form that I don’t need to spend money or space on,” Alvarino admits. “I can do that all from a very small room. It’s something I can wake up and start doing, which is what I like about art. It’s something you can do completely and solely on your own – it was meditative in those ways…I can just sit on a desk and work on it.”

Listening to Enrique’s work, one of the most immediately grabbing qualities is the way it pairs grating noise with kinetic rhythm, forming something that’s difficult and intuitive all at once. “The weird techno comes from my attraction to rhythm and dance and stuff,” he admits. “Being from Miami, it’s so clubby and very diverse down there – you get all the hip hop and all the weird cheesy South Beach clubs… but that dance culture was still an idea embedded in me.” All this merged with the way more experimental side of techno, the punk attitude Alvarino was starting to witness. “Those lined up together – music that’s very experimental but super universal,” he says, describing his evolving sound.

Similarly, the ethos for the Primitive Languages label emerged naturally, perhaps as a result of both him and Klein being tired of talking everything to death in art school. “It definitely was a way for both of us to continue the ethics we both built up in art school and found pretty important,” Alvarino agrees, adding, “ it didn’t have to have this highly analytical, institutionalized critique – it was just more like… a personal experience.” 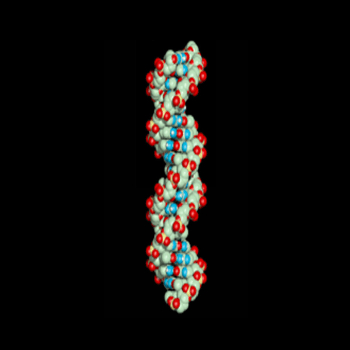 Sometimes personal experiences move beyond words, and listening to Enrique’s work often seems to strike the heart of something beyond language, prioritizing immediate body responses to an unexplainable surging groove. However, considering Alvarino’s background as a visual artist, I notice similar threads in the artwork that accompanies his SoundCloud tracks. “No Rent” shows an image of a dismally tiny basement apartment, while “Group Laugh” shows two men pursued by police hopping over the edge of a large concrete structure, perhaps a bridge.

The immediate feeling the work gives me is a sense of claustrophobic unease brought on by urban spaces, and so I ask Alvarino whether visual design is important in his work. “No matter how abstract the medium is, there’s no way around it,” he responds. “Living the lives we live and moving from one fairly industrialized city to another, you’re completely surrounded by certain imagery and sounds. You can tell some of the images are very industrialized – a lot of it’s about having a normal day, normal mundane parts of living in the city. You kind of reflect what’s around you in certain ways.”

Listening to Alvarino speak, I notice that he’s careful not to claim any image or sentiment that doesn’t ring true to him personally. “There’s also so many people that fetishize aesthetics and brand themselves in weird ways, especially the ‘darker’ North East noise vibe,” he continues. “Lots of these post-hardcore, power electronics really try to fit these tropes – like… it’s supposed to be ‘dark’, so then it becomes ‘dark’, y’know?”

I mention how noise scenes sometimes seem to hold shocking imagery and reactionary messaging as things of high importance. “Nick and I definitely talk about that a lot” Alvarino responds. “There’s this interview with the Incapacitants I was listening to recently, which references Japanese noise group Hijo Kaidan and their early performances, which involved people urinating on stage. And in this interview, he said he wasn’t necessarily into those performances because ‘the pissing on stage doesn’t really change the sound at all’….” 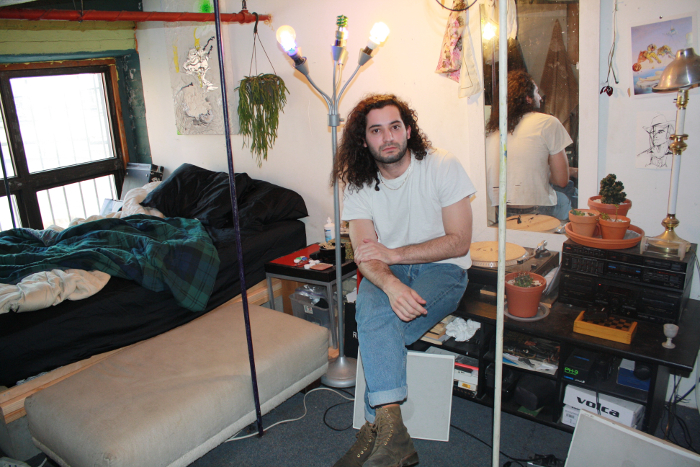 “I really like the piss quote though, we both laughed about it quite a bit,” Alvarino continues, adding both he and Klein ” try not to fall into the tropes of pulling from imagery outside our personal experiences and lives, and try not to fetishize or change the emotional meaning of the thing we make.” Alvarino states Primitive Languages itself has no aesthetic. “It’s a bullshit amalgamation where we give free range for the artists.” At this point, Alvarino acts out a pretend Primitive Languages conversation. “‘Oh hey, you wanna put out a tape? Shoot us over some artwork’… when they do that, we’re like ‘alright, that’s done.'” Instead of making lengthy back and forths revolving around overarching imagery with it, insisting “it’s on the artists, coming down to whatever they are trying to do. You take away the imagery, and the sound doesn’t change.”

The future is looking pretty bright for Enrique at the moment. Coming off the comically titled split tape with Klein, Every time you wish it was louder an angel loses their wings, Alvarino’s upcoming Bank Records NYC 12” is highly anticipated, and he’s about to embark on a North American tour. Touring is a task that’s much easier now both Klein and Alvarino have retired the Primitives Languages shop, which operated out of a Brooklyn shipping container until the end of 2014. “Both of us were just… horrible capitalists,” Alvarino sighs.

As the two longtime friends will be playing live side-by-side throughout the tour, I’m curious how they structure their sets. “It’s building these stuffed Ableton sets, and reaching a point where I can play it out live where although there’s these pre-disposed clips and pre-made patterns that I’ve done in my room, the formation and composition and synthesis of all them depends to be very improvised,” Alvarino responds. “The sound of the night becomes based off how the PA sounds, or how I’m feeling. It becomes very reactionary, it becomes a live performance, and not just playing out pre-composed tracks.”

Once fringe musicians, Enrique is now playing larger shows, and crossing over from experimental scenes to more traditional clubs. While the music hasn’t changed, I’m curious if the reception has.

“There’s a certain power that people have jacked into that gives off certain emotions,” Alvarino reflects. “The way that distortion plays with each other, the fact that it meshes, comes in and out, that sounds blend, that it’s not clean and predictable…and if it turns into a beat, it just becomes this universal thing that you can dance to and groove to and feel yourself to it. Even if you look at purely abstract noise, it’s still very emotive.  It’s an automatic thing.”

I jokingly ask if Alvarino will bring any of his choreographed hip hop dance moves to his upcoming tour. He laughs, and then responds with sincerity, “That’s why I make dance music, man – it kinda gets that outta me.” 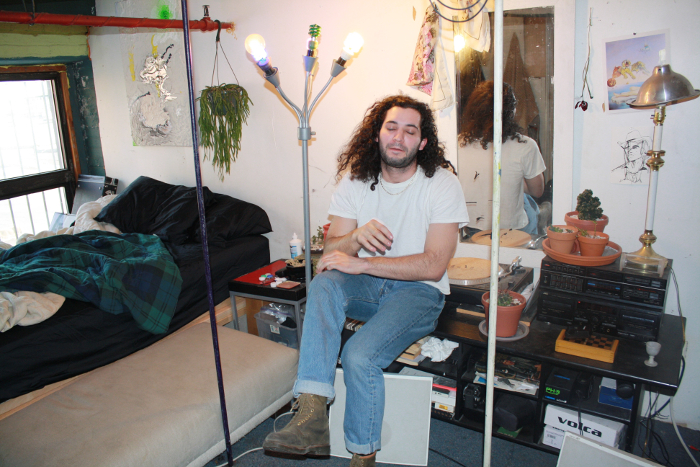