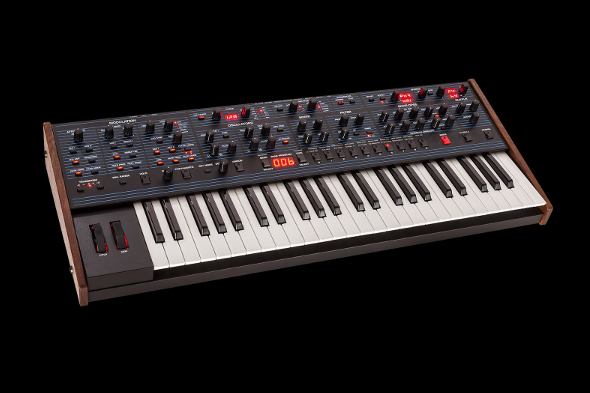 The last time synth pioneer Dave Smith graced out website was with the announcement of a desktop version for the desktop Prophet-6, an updated version of the seminal Prophet-5, a classic analogue polysynth originally released in the late ‘70s. As Robin Lee pointed out in his 2012 review of the Mopho x4, the Prophet 5 is regularly credited as the advent of real polyphonic synthesis, however there’s argument that Tom Oberheim was there first with a four voice synth called the FVS-1. Nevertheless, with a lifetime of synthesis and development between the two, Smith and Oberheim have teamed up to deliver a new polyphonic synthesiser called the OB-6.

With a sound engine inspired by Oberheim’s classic SEM design, the six-voice keyboard synth features an all-analogue signal path, discrete VCOs and filters. Reverb and delays effects on board are digital, taking in with 24-bit, 48 kHz resolution, however the OB-6’s true bypass keeps the full analogue signal path in check. Furthermore the OB-6 includes and arpeggiator and a polyphonic 64 step sequencer, semi-weighted keys with after touch sensitivity. For more information check out the Dave Smith website and watch the promo video of Smith and Oberheim swapping signal path notes over a stiff drink at Tony’s Cafe below.

Dave Smith Instruments will release the OB-6 for an approximate UK retail price of £2000.