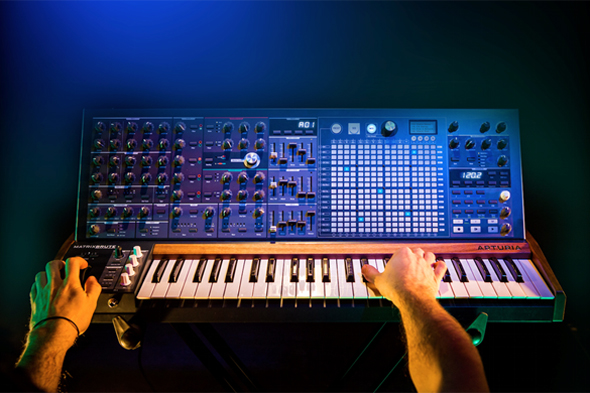 The manufacturer lifts the lid on the MatrixBrute synthesiser and KeyStep sequencer.

January is always a good time for music tech announcements, as the major players in the industry roll out their flagship products for the coming year at NAMM. The California-based convention is certainly one of the largest conferences for the audio equipment industry anywhere in the world, hence scores of developers and manufacturers are keen to have their freshest inventions ready to show off come January. Arturia are no exception, and this year they have two key new products to demonstrate from their stand ahead of general release later in the year.

The MatrixBrute, unsurprisingly, follows the well-established line of analogue synthesisers that Arturia have been making for years, most notably the MicroBrute and MiniBrute. Building on the popularity of those machines, the MatrixBrute equally taps into the trend towards modular synthesis while continuing the Arturia knack for making complex technology more accessible. With two analogue VCOs, one core VCO/LFO and plenty of scope for inter-modulation, two multimode filters, three envelope generators and two syncable LFOs, there is already enough punch in the signal department before you even get to the major selling point.

Aesthetically the 16 x 16 modulation matrix may echo the popularity of backlit trigger pads for software controllers, but in reality it presents a design breakthrough for those turned off from modular patching thanks to the potential (or is that inevitable?) scramble of wires. That’s not even mentioning the multi-stage analogue delay section, primed for extensive modulation and ready to serve as a processor for external sounds as well as the synth’s own. With 24 CV connections alongside the expected MIDI and USB, there’s little doubt this ranks amongst the most ambitious products Arturia has developed to date.

Arturia’s proudest achievement of 2015 was surely the BeatStep Pro, which proved to be hugely popular with the ever-swelling community of hardware heads looking for a creative, intuitive sequencing solution. Building on that trend, the KeyStep looks set to delve deeper into the options for controlling the melodic side of the outboard world (as well as servicing the needs of any soft synths). As with the BeatStep the compact 32-key device features CV and MIDI connectivity, but beyond the role of the average USB keyboard the KeyStep also packs a polyphonic step-sequencer with eight programmable memories, options for gate times and swing settings and plenty of potential for editing and overdubbing on the fly. Furthermore, the arpeggiator and chord play modes add to the appeal, making a neat partner to the BeatStep Pro.

A release date of the MatrixBrute synthesiser and KeyStep sequencer is yet to be disclosed.