Last year saw Dutch producer Nick Lapien enjoy acclaim through a record from his Artefakt project on Delsin and a solo release on Fed P’s Soul People label, but it’s as Metropolis that he most effectively captures the zeitgeist. Metropolis shares creative space with Giallo Disco, and artists like Roberto Auser and Timothy J. Fairplay  – both of whom have put out records on Charlois – but also has common ground with the Viewlexx/Murder Capital axis closer to Lapien’s home. Like those labels and their producers, Unify, his latest Metropolis release and Charlois debut, goes to great lengths to push electronic disco down a dark alley. 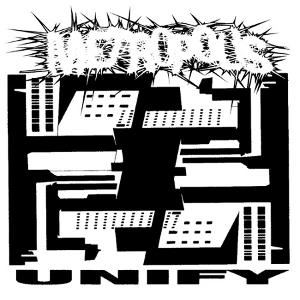 For the most part, the mood here is confrontational, the tone menacing and the underlying message one of unrest and discord. The tracks have titles like “Uberall Polizei, Nirgendwo Gerechtigkeit”- translated roughly as ‘police everywhere, justice nowhere’ – and yet Lapien manages to strike a balance between representing such anarchistic calls to arms and streamlined dance floor functionality.

On this aforementioned track, he achieves this by laying down a pulsing, hypnotic rhythm and ghoulishly dark synth lines – the kind of fusion you would expect to crop up on a Viewlexx release – which support a doomy, murmuring vocal. A similar approach is audible on “Kriegdienstverweigerer”. Roughly translated as a ‘conscientious war objector’, Lapien registers his dislike of any armed conflict via a prowling wave bass, subtle percussive hisses and more doom-laden vocals.

Finally, the title track dispenses with the fluidity of disco in favour of a more mechanical sound; the drums are rigid, the rhythm packs an industrial-sized punch and somehow, Lapien manages to merge the high-pitched vocal wail with the central synth riff. Unifying these elements proves to be a master stroke and together they create a screeching wall of sound that powers Lapien to the forefront of the pitch-dark disco sound.

A1. Uberall Polizei, Nirgendwo gerechtigkeit
B1. Kriegdienstverweigerer
B2. Unify