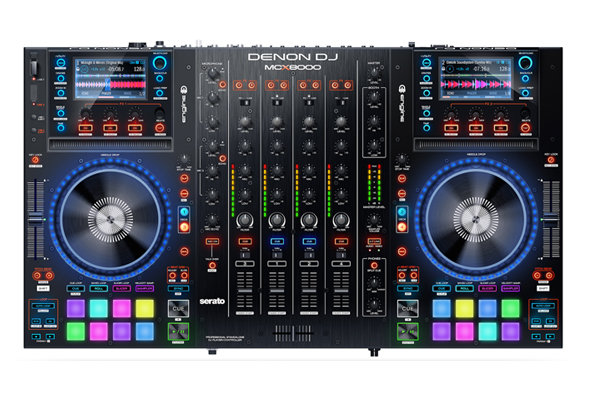 The MCX8000 works with Serato or as a self-sufficient mixing machine.

In the rampant evolution of the digital DJ market, the laptop is becoming less and less of a primary concern. While the concept of pioneering platforms such as Serato and Traktor have been based around software and libraries stored on a computer, recent developments in the CDJ market and beyond have rendered the notion somewhat old hat in favour of a sleek USB-oriented music collection. The Pioneer CDJ-2000Nexus in particular has become a favoured rider choice, nigh-on industry standard for the DJ booth, with its digital-focused features in amongst the familiar casing of the long-serving CDJ format.

As of last year there were more standalone digital setups emerging that cut out the need for any other equipment whatsoever, such as Pioneer’s XDJ-RX, and as DJ Tech Tools report Denon have now entered the fray with the announcement of their MCX8000. The layout should be familiar to anyone with a passing interest in digital DJing, from the twin display screens at the top via the jogwheels to the trigger pads down below. As a self-contained unit, the MCX8000 runs on Denon’s Engine software using two USB sticks as input, but it can also be used as a controller for Serato that fully integrates the waveform displays onto the hardware itself.

There are of course plenty of additional tricks bundled into the colourful package, such as on-board effects, sample and trigger options through the aforementioned velocity pads, and intriguingly an Ethernet connection named Stage Linq to send BPM information to a lighting console for all your slick, rhythmically timed lighting needs. With additional options for line inputs in a more traditional mixer role, Denon certainly seem to be covering a lot of different bases with their latest creation. While a precise release date hasn’t been announced yet it’s expected to hit the streets in Feburary. For now you can see the unit in action courtesy of the amusingly-named DJ Cable, via the video below.

Denon DJ MCX8000 will be released in February.