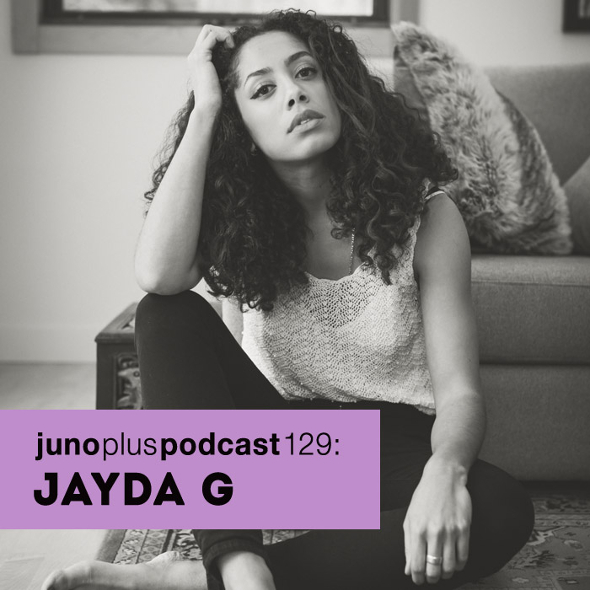 An hour of funk, boogie, disco and house from the Freakout Cult co-founder.

Our first podcast of the year comes from Jayda G, a DJ and producer who has impressed us with everything she has put her name to so far. Yet another example of the ever-flourishing music scene in Vancouver, BC, Jayda G first caught our attention early last year with a superb 68th edition of the Trushmix series. This hour plus session flipped through soulful disco, funk, house, R’n’B and more with undeniable swagger, dipping from one decade to another and suggested Jayda G to be a most-cultured digger. Splitting her time between Vancouver and Berlin has given Jayda the chance to show off these selecting skills in a few spots throughout Europe and we fully expect to see her on plenty more bills as 2016 takes shape.

Having partnered up with DJ Fett Burger in 2014 for a series of Vancouver events called Freakout Cult, last year saw Jayda G and the Sex Tags man expand their remit with the launch of a record label of the same name. The debut 12″ release, NYC Party Track, came from the two co-founders offered ample proof that Jayda G was capable of channeling her musical inspirations into productions, not least on the title track that superbly sampled “Disco Nights” from G.Q. This record arrived after the pair had served notice of their clear studio chemistry on “Velvet Vortex” a track issued through Melbourne label Butter Sessions replete with Sleep D versions.

As she tells us in the below interview, Jayda G is sitting on a lot more music and some of it will be released on the upcoming second Freakout Cult 12″ due this spring. She’s also the first environmental toxicologist to provide a podcast for us! If Jayda G’s Trushmix left you all warm and fuzzy you will love the selection she put together for Juno Plus, which commences with a snatch of Aquarian Foundation and then deftly eases up the temp over the course of a hour.

Glasgow locals can catch Jayda playing alongside fellow Vancouver act LNS at the 12th Isle 1st Birthday party (more info here) whilst she will also be sharing the bill with Maurice Fulton, DJ Sotofett and more for a Tessellate event at Corsica Studios this month.

Hello Jayda, how are things?

I’m doing well! I just finished up with the holidays and now I am getting back into the swing of things.

Thanks for the mix, what was your intention with it?

Honestly, I just wanted people to move. Whenever I make a mix, it is important to me to select songs that are authentic to who I am and what makes me feel inspired.  I want to bring people into my world so they can truly enjoy the flow and movement of the mix.

How and where was it laid down?

In my apartment in Vancouver, British Columbia. I have a pretty standard set up, Technics turntables (since I play all vinyl except for the unreleased stuff), Pioneer mixer, Yorkville speakers and a MOTU Audio Express.

It seems like 2015 was something of a breakthrough year for you, what were the highlights?

So many highlights! I could never imagine how 2015 would turn out and I have been happily surprised with the responses and support. Finally releasing the first Freakout Cult record was a huge thing for me. This was my first time being involved in releasing a record and it was incredibly gratifying to go through the process and see it come to fruition.

Any personal favourites tracks from this past year that didn’t leave your record box?

That Soichi Terada compilation, Sounds From the Far East, was heat last year! For me especially, “Saturday Love Sunday”. I’m a big fan of Cherrelle’s “Saturday Love”, so any edit or remake just ends up hitting home for me. Also, David Joseph’s “You Cant Hide”, which started off with putting it in my Trushmix and it really never left the bag.

How did Freakout Cult begin?

Freakout Cult started off as a small series of parties that Fett Burger and I threw in Vancouver. I guess it started in late 2014.  The people there have been super supportive and each party kept getting better and better. The night was for all the freaks of Vancouver that keep it real and who love to truly let loose.

What made you and Fett Burger decide to expand it into a fully-fledged label?

Fett Burger and I had been sitting on those songs for a while and we just wanted a label that had no boundaries or limits or set profiles. Starting our own label just seemed like the most obvious solution.

And we believe your debut solo 12” is due on the label later this year?

Yeah! You are correct. We are aiming for a spring release. A lot of love went into this release and I am so excited for it. The Sex Tags crew has been incredibly supportive and it’s been a big learning curve. There are a couple of songs from the release floating around on some mixes already so keep your ears to the underground.

What motivated you to start making music as well as playing it?

Music has been a huge part of my life from the beginning. From playing classical piano and violin for over 15 years to teaching myself to beat match – I just finally came to a point where I needed to share the music that I was collecting and making. Fett Burger as well as my family has been the ones to really push me and encourage me to put the music that I love out.

Are there any specific inspirations for Jayda G productions?

A lot of my inspiration comes from my work as a scientist and environmental toxicologist. I try and emulate sounds and emotions that I feel when I am out doing fieldwork or in the extraordinary nature of British Columbia, Canada. Another inspiration is the disco and soul music that I grew up with. These inspirations tend to come through in the bass line and percussions.

Let’s discuss your hometown Vancouver, why do you think there is so much exciting music coming from there right now?

I think there was always great music coming out of Vancouver. The city has a beautifully diverse music scene from house and techno to punk and indie rock. The world has just finally realized there are amazing artists and music producers that live here.

Any Vancouver artists in particular our readers should be looking out for?

Hahah you want me to say LNS don’t you 😉 But honestly there is so much talent in Vancouver! You just need to keep a look out.

Where can our readers catch you playing over the next few months?

I’m actually playing on January 8th in Glasgow with LNS, then January 15th at Corsica Studios in London. There are a few more dates – check my Facebook artist page – stoked actually for my January line up. It’s going to be an awesome start to the year.