Loads of labels are doing reissues but few pursue this activity with the same singularity as Clone. Over the past few years, the Dutch label has focused on re-releasing music by Detroit electro act Drexciya via the excellent Journey of the Deep Sea Dweller series. Those compilations brought together many of Drexciya’s hard to find tracks on remastered vinyl, making music that had previously only been available on rare original pressings to fans and DJs with extremely deep pockets. Now Clone applies the same approach to another ultra-rare Drexciya-related project. 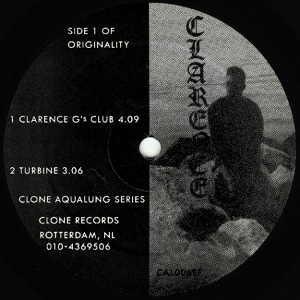 Clarence G was a one-off alias from the late James Stinson and pre-dates his work with Gerald Donald – the first Drexciya record was released in 1992, whereas Hyperspace Sound Lab landed the previous year. Original pressings of Hyperspace Sound Lab are being sold for over 400 pounds, so this reissue is timely. It also provides a fascinating snapshot of Stinson’s early recordings and gives the listener some insight into where Drexciya came from. “Data Transfer”, with its brutal bass, nihilistic synths and metallic riffing, sounds like he was inspired by industrial and EBM, and could be a rudimentary version of Drexciya’s sub-aquatic electro. In the same category is “Turbine”, where snares crash in on heavy, rolling 808s and almost chords churn with an almost self-parodying menace.

While both tracks focus on technology rather than the fantastic, underwater myths that subsequently defined Drexciya’ work, many of the production methods –  the sense of space, those cavernous drums and a freeform, DJ-unfriendly approach to composition – are all present and correct. More revealing are the other tracks; both “Clarence G’s Club” and “Cause I Said It Right” are hyper electro funk workouts, with what could be Stinson’s only vocal performances. “Cause I Said It Right” is merely a series of bass pulses and reduced kettle drums underpinning a fast-paced vocal delivery, while “Clarence G’s Club” is more typical for Detroit electro-funk, with Kraftwerk synths and a high-paced drum workout supporting a narrative about the vocalist – presumably Stinson – performing in a club.

Drexciya went on to release some of the world’s most distinctive, esoteric electro, but this reissue is a rare peek at a musical genius taking his first, tentative steps. Apart from hopefully thwarting those who want to profiteer by selling original copies at exorbitant prices, it is also required listening for anyone who wants a sense of where Drexciya came from.

A1. Clarence G’s Club
A2. Turbine
B1. Cause I Said It Right
B2. Data Transfer