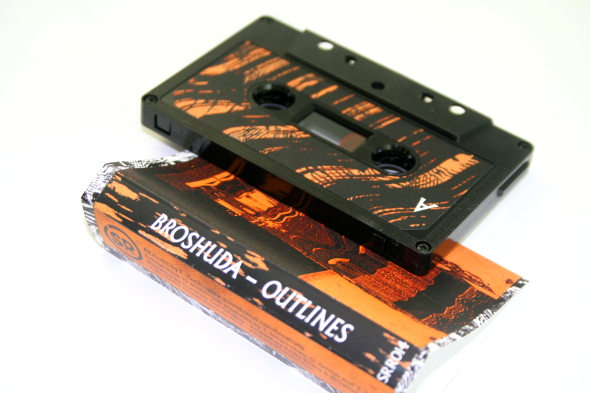 Creativity is not always about inventing something totally new. In contemporary arts and music it might be more about rearranging things, pulling together already existing pieces to form something new. Broshuda refers to that question with a wink when he labels his music ‘Eno-Grime’, ‘Glambient’, ‘Mindgaze’, ‘Synthkrust’ or ‘Post-Wonk’. On his latest release, the Outlines cassette for Sonic Router, the German producer gives an extensive insight into what this may sound like. 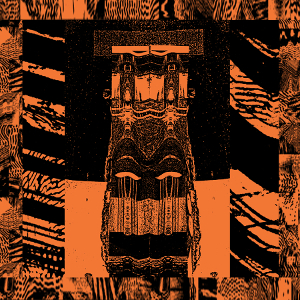 Broshuda‘s neologisms give hints about his work. As a graphic designer, illustrator and producer he takes fragments from different spheres in music and imagery and rearranges these elements to form his very own collage. But he doesn’t simply sample elements, but creates them mostly himself, sampling versions of existing patterns and brings them together. What Broshuda’s music actually sounds like is hard to pinpoint, however other works on labels like Seagrave and Phinery Tapes are characterized by rough analogue sounds and the charm of cassette fidelity.

Broshuda’s new tape for Sonic Router once again shows the openness of the London label to delve into experimental territory while highlighting the unique characteristics of his work. Outlines is a steady walk through a sonic terrain of urban landscapes that organically morph into something more suited to wide-open panoramas. Repetitions of soft sounds, warming melodies and tiny percussive elements radiate a sense of calm. Field recordings thicken the structure of the tracks and with this richness in sound an unspoken narrative can unfold  – a mosaic of dripping and breathing atmospheres.

Ambient aside, references to house, dub and grime can be also heard. The sounds of “Heatmap” meander around skeletal, slowly driving beats, while the title track creates a driving pulse through tiny, whirling hi-hats and slightly offset melody loops. The eruptive beats in “NKS” leave a lot of space for piano chords to flourish from one stumbling kick to the other. “Celebrity Skin” combines the stomping character of a 4/4-beat with aggressive breaks that evokes a surreal impression of a video game. “I Never Had A Sega” has a strong deep house feeling with shimmering synthesizers and variations of rough house beats. The short outro “Show Me The Way” features both regular collaborator B£AMS and Dimlite, the now defunct moniker of the hip hop-electronica producer now working as Dim Grimm.

Broshuda’s constructions are abstract yet fully formed providing experiments that aren’t deadly serious, elitist or conceited, and they combine deep thoughts and ideas with warmer emotive content and surrealistic humour.